Sochi/Adler Airport closes in on three million passengers in 2014 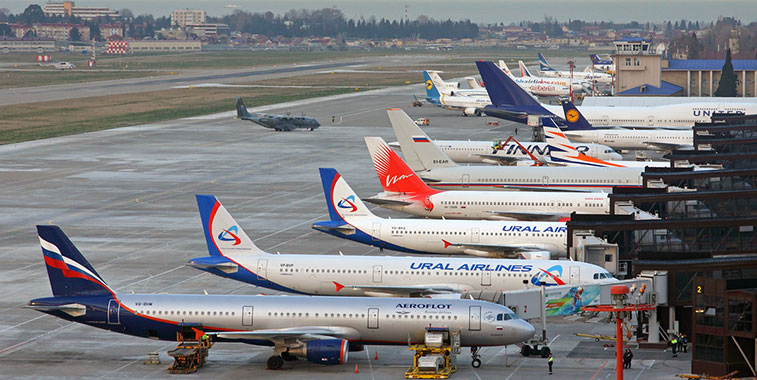 Olympic-sized increase in traffic. This year’s Winter Games provided a huge spike in passenger numbers at Sochi/Adler Airport – this February’s figures were up 200% ‒ however, every month this year has posted double-digit annual growth and is on course to break three million passengers for the first time.

Huge sporting events like the Olympics are often used to showcase the country and city involved. Indirectly, the city’s airport stand to benefit from a huge spike in activity over the duration of the event ‒ although not all do, as proven by Brazil’s airports during the recent World Cup. Counterbalancing this increased activity, the serving airports may well have had to spend significant sums in ‘preparing’ the facilities for the influx of passengers. Sochi/Adler Airport’s new terminal was the first piece of Olympics infrastructure to open in readiness for the sporting event earlier this year, and costed $200 million.

Looking at the traffic figures for the period of January to March 2014, this expenditure was clearly necessary, as Sochi experienced 39%, 200% and 33% respective growth in monthly figures over this period. While the rest of 2014 has not been up to this level, each month (April-September) has still managed to deliver double-digit growth. Combining these two factors, anna.aero forecasts that the airport should be on course to get close to, and even possibly surpass, the three million passenger milestone for the first time. 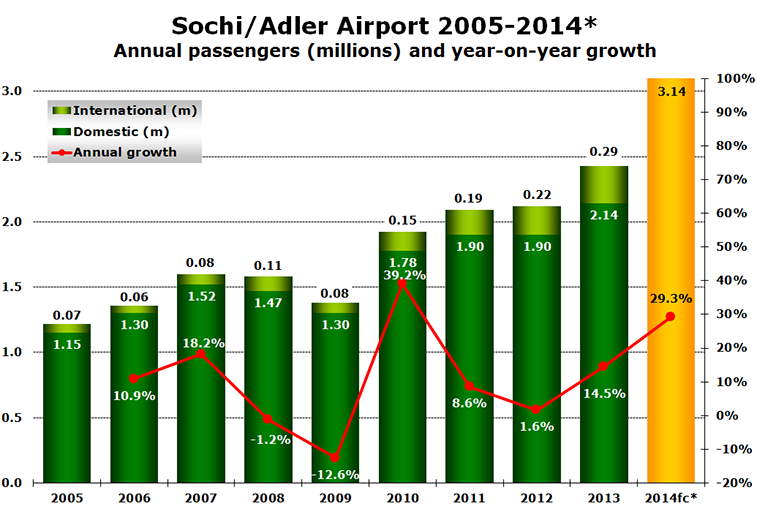 Entering Sochi’s monthly passenger data for 2013 into anna.aero’s Seasonal Variation in Demand (SVID) calculator, the airport delivers a below par performance, generating a score of 18.91 ‒ a ‘poor’ rating. Evaluating Sochi alongside two similarly-sized Russian airports, we also ran SVID calculations on Samara (6.32 – ‘good’) and Kazan, which also generated a ‘good’ result (9.07). Sochi’s annual traffic profile reflects those found typically in a ‘resort’ city, where airports experience a disproportionate seasonal high in July and August when compared to January and February. The seasonal lows for the three airports represent 34% (AER), 50% (KUF) and 43% (KZN) of their respective seasonal highs.

With over 70 seasonality performance evaluations completed so far in 2014, the airport will be disappointed by its global ranking of 67th, nestling in between Reykjavik/Keflavik (17.68) and Ajaccio (25.71). There is some good news however, as the airport’s seasonality performance has improved when compared to the result achieved in 2012, when it attained a score of 24.37 ‘managerial and operational challenges’.

Two-thirds of capacity to Moscow

Unsurprisingly, two out of every three seats (67%) being flown out of Sochi are to the nation’s three capital city airports. However, this dominance is not equally reflected in terms of weekly flights, as Domodedovo, Sheremetyevo and Vnukovo command only 58% of weekly flights. 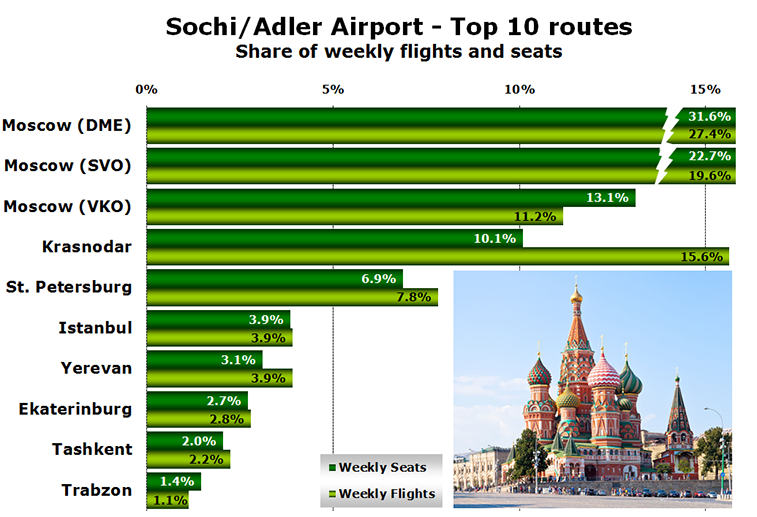 Six out of top 10 airports are domestic routes. Turkey leads the way in terms of international destinations, with two inside the top 10, complemented by further regional connections to Tashkent (Uzbekistan) and Yerevan (Armenia). The total number of scheduled destinations (16) offered by Sochi has gone unchanged over the last year, although there has been some movement within it, as S7 Airlines’ weekly service to Novosibirsk has replaced the lost twice-weekly operation to Omsk previously flown by IrAero Airlines.

Looking at Innovata Diio Mi data for week commencing 7 December 2014 and comparing it to the same week last year, Aeroflot has not only maintained its top spot, but it has dramatically grown its commitment to Sochi too, increasing weekly seats by 26% year-on-year. This growth may well have come as a result of a capacity transfer between Aeroflot and Rossiya Airlines (the former owns a majority stake in the St Petersburg airline), as the former has increased its St Petersburg service to double-daily (up from daily) on the city pair, while the latter withdrew from the market and the airport on 29 March. The SkyTeam carrier has also added two extra weekly flights on its operations to Yerevan, and a further nine on its domestic services to Krasnodar. With a 150% annual increase in capacity, Ural Airlines is Sochi’s fastest growing carrier, adding an extra weekly flight on its Ekaterinburg operations (up to thrice-weekly), and it has also started a twice-weekly Domodedovo service. 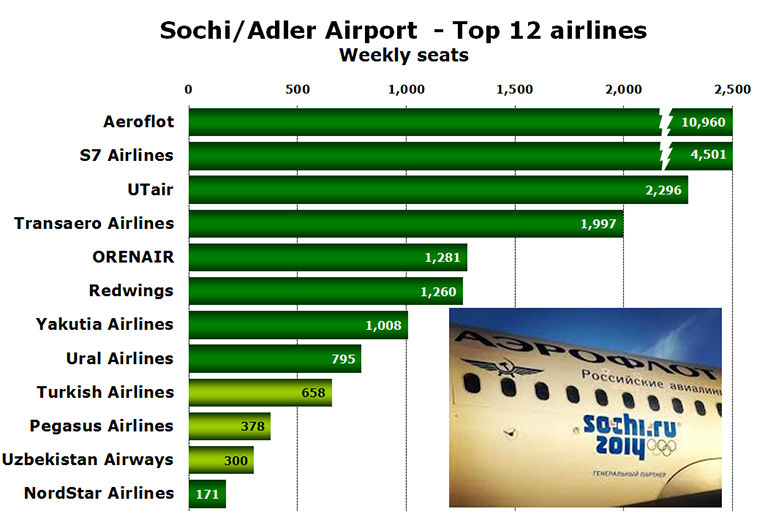 Sochi’s top 12 airlines are dominated by Russian carriers, with only three international airlines represented (highlighted in light green). The airport has welcomed two new airlines to its roll call over the last 12 months, with Redwings (six times weekly to Domodedovo) and ORENAIR (daily to Domodedovo). In the same period, VIM Airlines, Air Armenia (which has currently suspended all operations), IrAero Airlines and Tartarstan Airlines, along with Rossiya, have suspended their respective operations into Sochi.