Uzbekistan Airways began a weekly non-stop service from Tashkent to Singapore on 3 April 2014 using one of its 767-400s. Singapore joins Bangkok, Beijing, Kuala Lumpur, Seoul Incheon and Tokyo Narita as destinations in Asia served by the state-owned flag-carrier of Uzbekistan.

Uzbekistan Airways is the national carrier of Uzbekistan, a country the size of Sweden with a population of around 30 million people. The country’s neighbours are Afghanistan, Kazakhstan, Kyrgyzstan, Tajikistan and Turkmenistan. The airline was launched in 1992 and currently operates a fleet of over 30 aircraft including 13 Boeings (757s and 767s), 13 Airbus’ (A300s and A320s), three Avro RJ-85s and some IL-114s. According to Boeing’s website, the airline placed an order for two 787-8s in June 2007, but neither of these aircraft has yet been delivered. In recent years the airline has typically carried between two and three million passengers each year, primarily from its base at the Uzbekistani capital Tashkent. 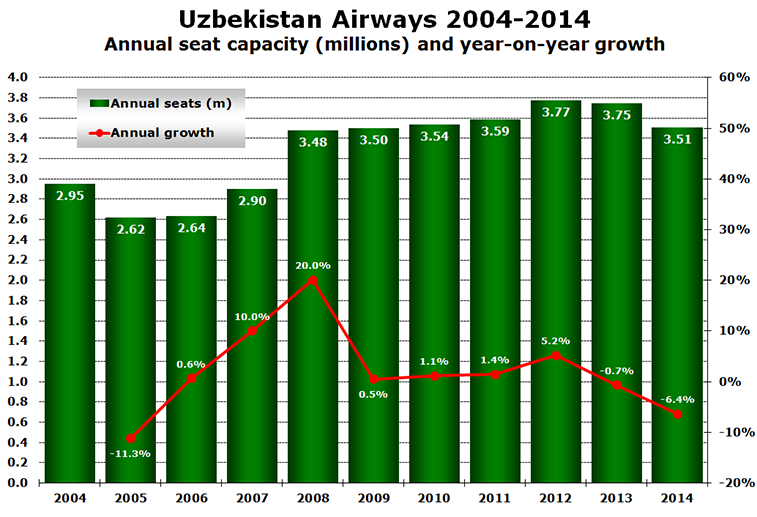 Since 2008, annual seat capacity has been surprisingly stable, with almost no capacity growth during this period, although passenger numbers are believed to have risen as a result of improved load factors. According to a recent airline press release, in the first nine months of 2014 the airline has transported 1.98 million passengers, down just over 4% when compared with the same period in 2013.

Traffic is down across all geographic market segments. According to the airline this is partly due to the reduction in capacity on routes to Paris, Riga and Tokyo, and the closure of the service to Geneva. The cessation of services to Kiev and Simferopol in Ukraine and a decrease in demand for services to Ekaterinburg, Kaliningrad, Krasnodar, Krasnoyarsk, Mineralnye Vody, Samara and Tyumen contributed to a 5% drop in CIS traffic. However, a new service to Singapore was launched in April to help boost non-CIS international traffic.

Analysis of the airline’s schedule data reveals that in terms of weekly flights seven of the airline’s top 10 routes are from Tashkent to other domestic destinations (in dark green). The only international destinations in the top 10 are Moscow Domodedovo, Istanbul Atatürk and Almaty in Kazakhstan. In total, this August Uzbekistan Airways served 51 airports with scheduled services. 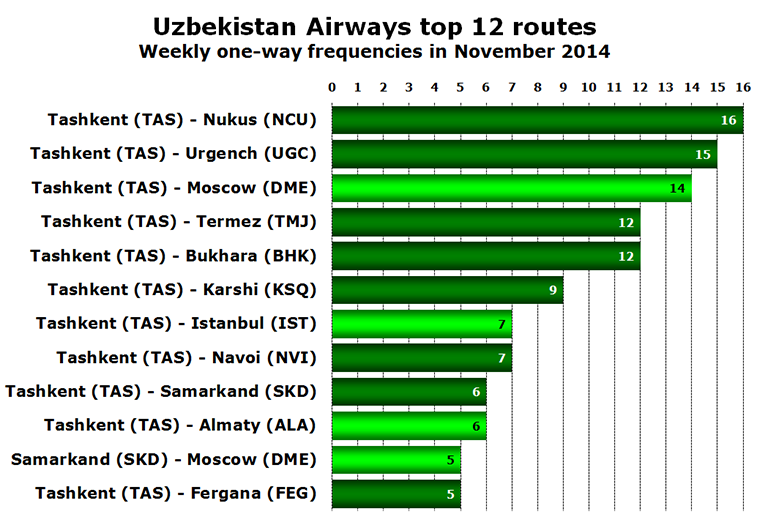 Destinations served in Europe include Frankfurt, London Heathrow, Paris CDG, Riga and Rome, with one of the two weekly Riga services continuing on to New York JFK. According to UK CAA statistics the Heathrow-Tashkent route has seen around 22,000 annual passengers in both 2012 and 2013. In Asia, the airline serves Bangkok, Beijing, Kuala Lumpur, Seoul Incheon, Singapore and Tokyo Narita. With the exception of Bangkok, all of these routes are served with just one or two weekly flights.

Uzbekistan Airways is believed to be hoping to become a member of the SkyTeam alliance at some point in the not too distant future. Korean Air has apparently been the ‘sponsor’ of the proposal but there has been little official comment on the progress of this plan for many months. It was also reported earlier this year that the airline was planning to launch weekly flights from Tashkent to Munich and Vienna in summer 2015. Vienna Airport has confirmed to anna.aero that it still expects service to start next summer, but Munich Airport has told us it now expects the Tashkent service to start in summer 2016. 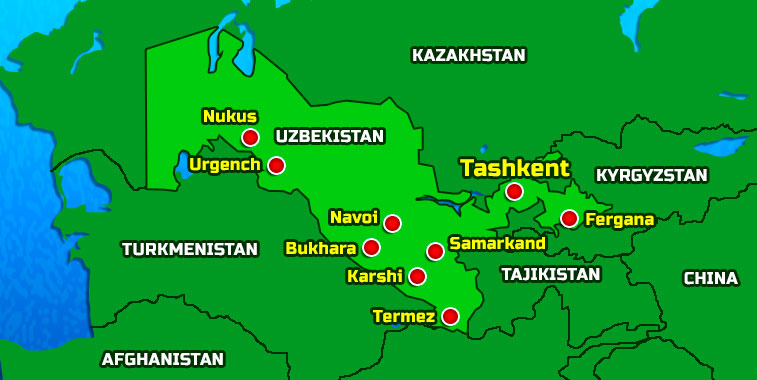 Centre of the ‘stans. Uzbekistan is surrounded by several other ‘stans. Uzbekistan Airways connects Tashkent with several domestic points across the country. Domestic routes account for just over 20% of the airline’s traffic so far this year.