Dutch airports on track to surpass 60 million passengers in 2014 While Ryanair withdrew services to seven destinations from Maastricht Aachen this August, the ULCC’s Eastern European counterpart – Wizz Air – introduced a new link from Katowice on 28 October, which is operated twice-weekly.

Inhabited by close to 17 million people, the Netherlands is a very densely populated country for its size, with a population density of 406 inhabitants per square kilometre. In fact, Bangladesh, South Korea and Taiwan are the only countries to have both a larger population and a higher population density. According to Innovata schedule data for this December, the country is served by five commercial airports providing scheduled airline services, out of which Amsterdam commands 93% of total weekly capacity. These airports handled a combined total of 58 million passengers in 2013, which represents a 4.3% increase over 2012 figures. Nonetheless, in the first eight months of 2014, for which traffic data is already available, the five airports’ passenger numbers increased by 4.6% when compared to the corresponding period of 2013, with almost 41 million passengers handled by the end of August. If Dutch traffic continues on its existing 2014 growth trajectory, anna.aero forecasts that it will surpass 60 million passengers this year. In fact, the Dutch airports have been posting passenger growth since January 2013, when a modest decrease of 0.2% was reported. 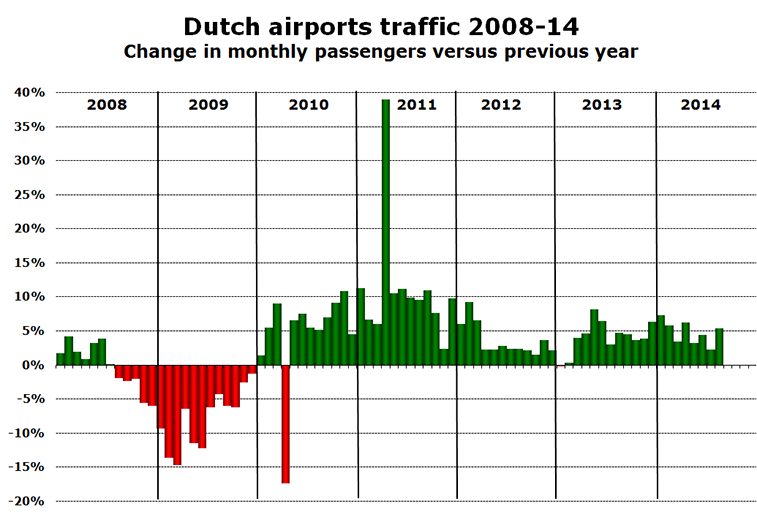 However, further growth is expected next year, as easyJet has announced that Amsterdam will become its 26th base, as the LCC continues to pursue those markets where it can attract high-yielding business passengers with high frequency services. As a result, the airline is likely to base three aircraft at the busiest Dutch airport from next summer, and expects to double its current passenger numbers to seven million.

While passenger figures across the five Dutch airports are up 4.6% in 2014, the country’s annual capacity reported less dynamic growth, around 3.3%. Despite this, the flag carrier KLM managed to increase its capacity by 6.3%, as it introduced a number of new routes, including the resumption of flights to Santiago in Chile on 2 February as well as the addition of services to Bilbao and Zagreb on 26 May. Looking at Innovata schedule data for this December, the SkyTeam member commands 49% of total seat capacity in the Netherlands, followed by easyJet (6.6%) and transavia.com (4.6%). While these are classified as the biggest airlines serving the Dutch country market this month, the fastest growing carriers by seat-capacity are Garuda Indonesia (+136%), Flybe (+79%) and TAROM (+56%), with the former having introduced direct flights from Jakarta to Amsterdam on 30 May.

Ryanair’s Maastricht Aachen base shrinks in 2014

In the first eight months of 2014, Dutch airport traffic is up 4.6% when compared to the same period in 2013, according to Statistics Netherlands. Three of the country’s airports have reported year-on-year positive numbers, namely Amsterdam, Eindhoven and Rotterdam. The most dramatic fall in passenger numbers (-44%) has been witnessed at Maastricht Aachen, followed by Groningen (-10%). Interestingly, the former is a Ryanair base since December 2012. Examination of the Irish ULCC’s operations from Maastricht Aachen, reveals that the airline has withdrawn services to seven destinations this August when compared to the corresponding period last year (Malaga, Milan/Bergamo, Brive, Dublin, Pisa, London Stansted and Venice Treviso). 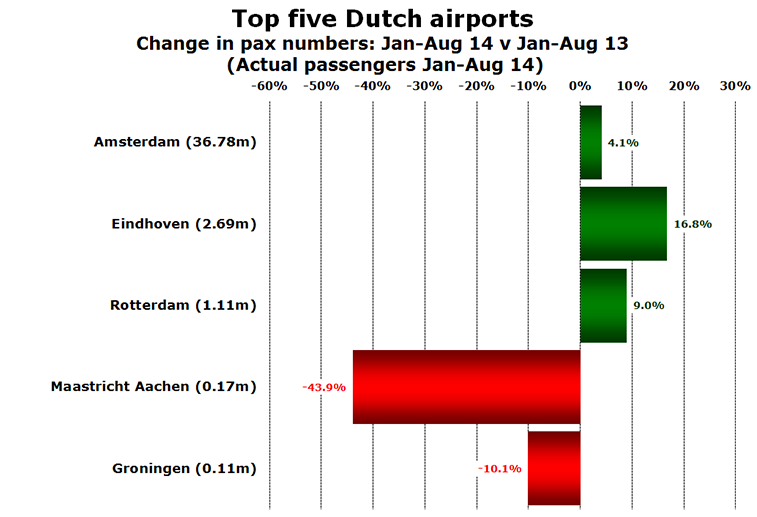 By comparison, Eindhoven, another Ryanair base, has noted the most exceptional growth (+17%) or an additional 385,810 passengers so far this year. The ULCC introduced four new destinations, to Murcia, Knock, Treviso and Warsaw Modlin this August, when compared to the same month last year. Besides this, the second largest airport in the Netherlands welcomed transavia.com’s connections to Athens, Bodrum, Dalaman, Innsburck and Gran Canaria, as well as Wizz Air’s services to Poznan and Tuzla. Furthermore, on 28 October, Groningen Airport welcomed Wizz Air’s new service from Gdansk with a cake. The 808-kilometre sector is served twice-weekly, on Tuesdays and Saturdays.