FIGUST country pair Germany-Italy grows by 7%; Lufthansa is #1; its partners are #2 and #3 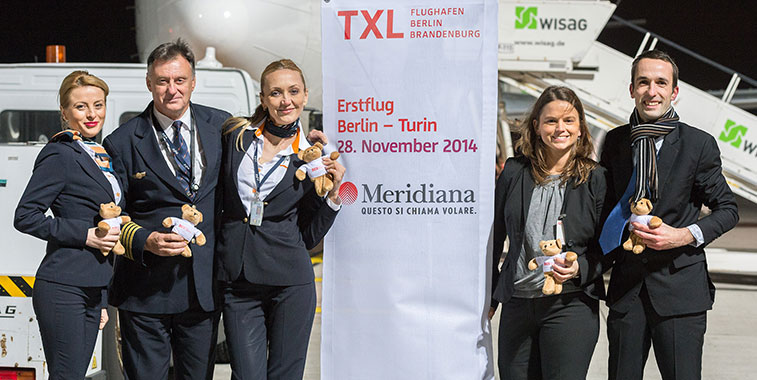 Started on 28 November, Meridiana began twice-weekly services from Turin to Berlin Tegel. The new route has contributed to the 7.2% growth in weekly seats between the two FIGUST countries of Germany and Italy.

This week has seen the start of two new routes between two of the FIGUST (France, Italy, Germany, UK, Spain and Turkey) group of European countries, with Meridiana launching a twice-weekly operation between Turin and Berlin Tegel on 28 November while germanwings has assumed responsibility for flights from Düsseldorf to Rome Fiumicino from its parent Lufthansa, with the start of a four times weekly service on 30 November. Despite the maturity of the German and Italian markets, and the flying between them, weekly seats are up 7.2%, weekly flights by 4.2% and weekly ASKs by 7.1%, which tends to suggest that this market is far from settling for just marginal annual growth. 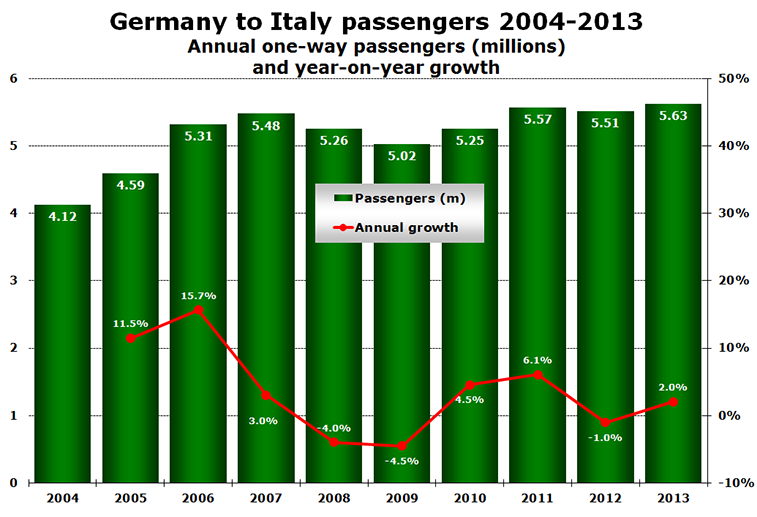 The Germany to Italy market almost doubled from a 2002 base of 2.75m annual passengers to 5.5m in 2007, when the country pair dipped during the onset of the economic crisis for two years, and since 2009 the market has recovered to around 5.5m again. Clearly it was the arrival of LCCs in the market that kicked off this growth spurt, giving travellers a cheaper alternative to just jumping in their BMWs or Mercedes and driving to Italy. If the 7.2% growth in weekly seats which has been witnessed in week commencing 7 December is perpetuated throughout 2014, the country pair will almost certainly reach an all-time high this year and may even get close to breaking six million annual passengers for the first time.

Lufthansa not only dominates the Germany-Italy country market, but its weekly seats are more substantial than the combined volumes offered by the next three largest carriers ‒ Air Dolomiti, germanwings and Ryanair. It is also worth bearing in mind that the German flag carrier is also the parent company for the #2 and #3 airlines in this market too. Lufthansa has also been shuffling its overall capacity between Germany and Italy, as its own weekly seats are down 6.1% year-on-year, while Air Dolomiti is up nearly 30% and germanwings has increased by 14%. 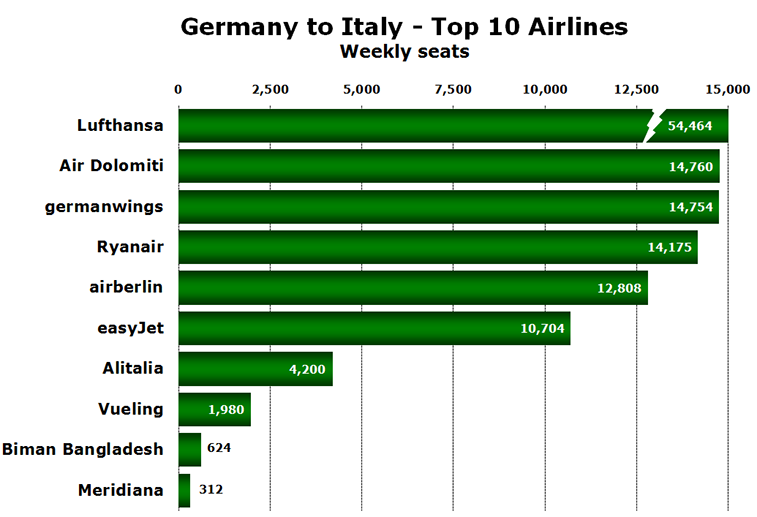 Only airberlin (-0.8%) joins Lufthansa in posting negative annual growth figures of the leading carriers. The fastest growing carrier of the top 10 is easyJet, which has added 46% more weekly seats this December when compared to last December. Vueling, Biman Bangladesh Airlines and Meridiana are all new entrants to the top 10, while TUIfly now longer operates between Germany and Italy.

Looking back to the same week five years ago, the market size was around the same as that experienced in December 2013, and while the players are consistent, significant changes are evident. Surprisingly, Ryanair (-34%) is a third smaller in December 2014 than it was in December 2009, however this fact is probably due to the airline’s far more aggressive ‘parking’ of winter capacity which the ULCC practices with far more discipline than it did five years ago. By contrast germanwings is now 166% bigger than it was five years ago, and easyJet has grown by 72% between Germany and Italy over the same time frame.

The top 12 city pairs control 47.3% of the total Germany-Italy country market, with their respective share going more or less unchanged over the last year (47.0%). Italian flag carrier Alitalia is only present in three of the top 12 city pairs in 2014, a position that has not changed since 2009. Seven of the top 12 city pairs have shown increases over the last year, with the fastest growing market being Frankfurt to Milan Linate (+23%). Both incumbents have increased their respective flying over the past 12 months, with Lufthansa adding an extra seven weekly flights (up to 36) and Alitalia two more (up to 12). Compared to the schedule for the same week in 2009, the market has hardly shifted, as Alitalia was operating 10 weekly services then, and Lufthansa offered 31. 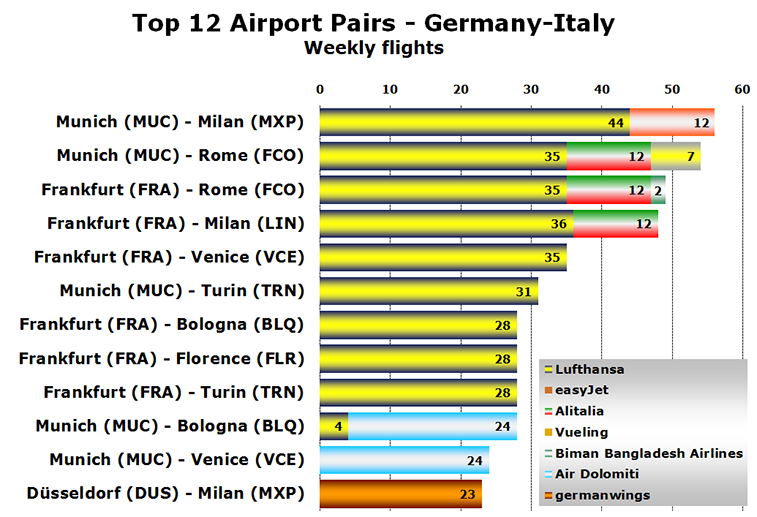 Only two of the top 12 routes have witnessed an annual decline – these are Munich to Venice Marco Polo (-11%) and Düsseldorf to Milan Malpensa (-32%). This has meant that the latter city pair has fallen from the fifth position it held last year to 12th during this current analysis. The former route has dropped from 10th to 11th. Frankfurt to Bologna is the city pair that has shot up the rankings, climbing from 11th to seventh, as a result of the only serving carrier, Lufthansa, adding an extra three weekly frequencies.

The country pair market is likely to continue its growth trajectory as there are numerous new routes planned by incumbent airlines according to anna.aero’s New Route Database:

Vueling – 1 May – Rome Fiumicino to Stuttgart;

germanwings – 9 May ‒ Hamburg to Bari;

airberlin – 23 May – Berlin Tegel to Rimini.