This year has seen a number of new routes launched at Fukuoka Airport in Japan, including HK Express from Hong Kong (on 10 April), Skymark Airlines from Ibaraki (18 April) and Peach Aviation from Okinawa (on 19 July). Passenger numbers look set to pass 20 million for the first time in 2014 despite the limitations of a single runway and a night-time flight ban from 22:00 to 07:00.

Fukuoka Airport, located on the northern shore of Kyushu Island in west Japan, is one of Japan’s five busiest airports. It competes with Sapporo/Chitose Airport to be the busiest airport in Japan outside of Tokyo, despite being restricted to a single 2,800-metre runway. Dominated by domestic traffic, the airport competes for passengers with the Japanese high-speed Shinkansen trains which operate from nearby Hakata Station. However, the emergence of low-cost carriers (LCCs) in the Japanese domestic market in 2012 has reversed the decline in passenger numbers at the airport. anna.aero estimates that after handling 17.7 million passengers in 2012 the airport came close to handling 20 million in 2013 and should pass that landmark figure in 2014. 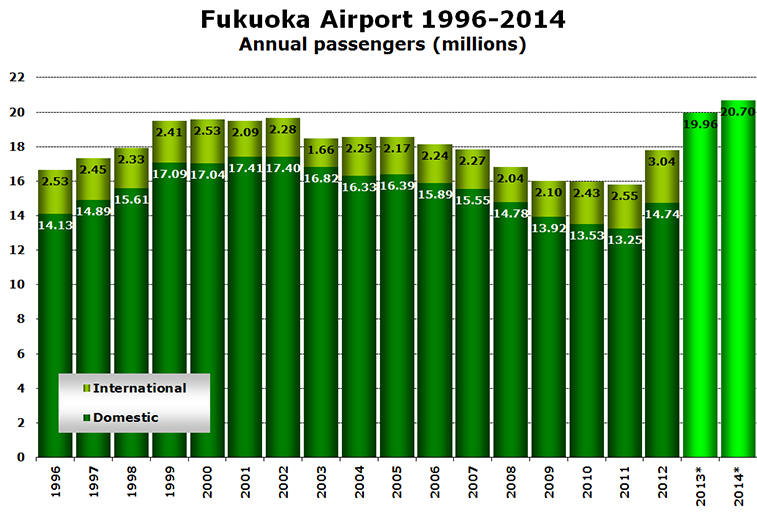 In 2012 international passengers passed three million for the first time. It is worth noting that the South Korean cities of Busan (214 kilometres), Jeju (367 kilometres) and even Seoul (550 kilometres) are all much closer to Fukuoka than Tokyo (around 900 kilometres). This week saw the launch of Jin Air’s new daily service from Seoul Incheon, competing with several existing carriers on the route. The airport’s two longest services are to Amsterdam (thrice-weekly with KLM on 777s – launched on 2 April 2013) and Honolulu (served by Delta Air Lines).

HK Express, Jetstar Asia and Jin Air all new in 2014

All Nippon Airways offers more seats and destinations than any other carrier at the airport and has also increased its seat capacity by 3.1% compared with last December. Japan Airlines by contrast has cut its seat capacity at the airport and the number of destinations served. A total of 32 airlines are operating scheduled services at the airport this December. Apart from Jin Air, other airlines to start their first service to Fukuoka in the last 12 months are HK Express (from Hong Kong) and Jetstar Asia (from Bangkok Don Mueang). All of these new carriers are in the low-cost segment of the industry. Other new services launched in 2014 are Ibex Airlines to Komatsu (daily), Peach Aviation to Okinawa (daily), Skymark Airlines to Ibaraki (daily), and StarFlyer’s new daily service to Nagoya. 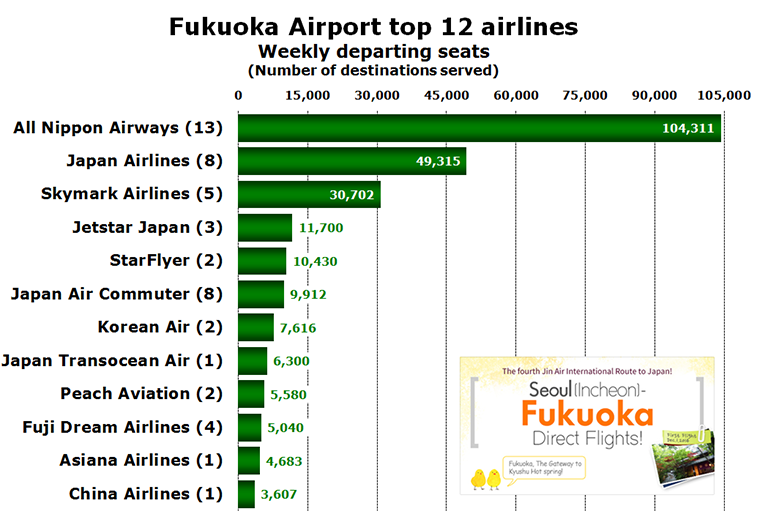 70 flights per day to Tokyo

With even the bullet train taking five hours to cover the journey, Fukuoka’s busiest route by far is to Tokyo, with 60 daily flights to Haneda Airport and a further 10 per day to Narita Airport. There are 20 flights per day to Okinawa, while Miyazaki, Nagoya and Osaka Itami are also all served with at least a dozen daily flights this winter. In all 40 destinations are served non-stop this winter from Fukuoka, of which 25 are in Japan. Apart from the previously referred to international services, there are also non-stop flights to: Bangkok; Dalian, Qingdao and Shanghai in China; Guam; Hanoi and Ho Chi Minh City in Vietnam; Hong Kong, Manila, Singapore and Taipei. 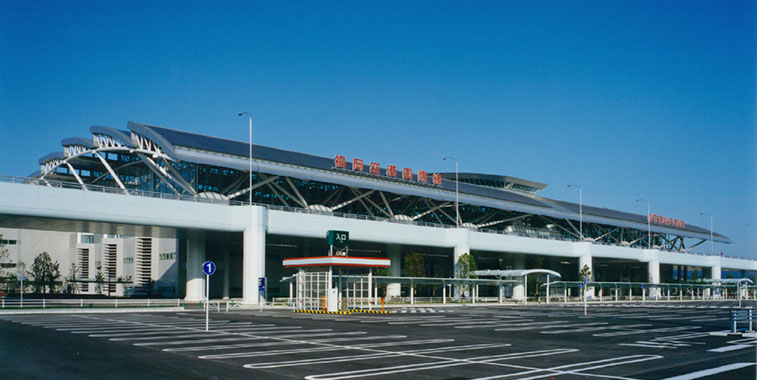 Fukuoka’s international terminal was opened in May 1999 and handled over three million passengers for the first time in 2012. Located on the opposite side of the runway from the three domestic terminals, it lacks direct access to the subway system, something that is available in the domestic terminals. This winter Fukuoka serves 15 international destinations non-stop, including Amsterdam (with KLM) and Honolulu (with Delta Air Lines).

Competing with other airports on Kyushu

While Fukuoka is the busiest airport on Kyushu Island it is not the only one. In total there are eight significant airports on the island, with four located less than 100 kilometres from Fukuoka; Saga (50km), Kitakyushu (55km), Kumamoto and Nagasaki (both around 90 kilometres away). With traffic picking up once more at Fukuoka the airport would like to expand, but building an additional runway will be extremely difficult as the airport is surrounded by residential areas and there is also a night-time curfew banning departures before 07:00 and arrivals after 22:00. Fukuoka is closer to Busan and Jeju in South Korea than it is to Tokyo. However, while ferries are the only alternative to reach South Korea, Japanese travellers can get to Tokyo in around five hours using the legendary Shinkansen ‘bullet’ trains.