Revealed: which US airlines flexed their flight programme most over Thanksgiving; Allegiant Air and Delta Air Lines top our charts 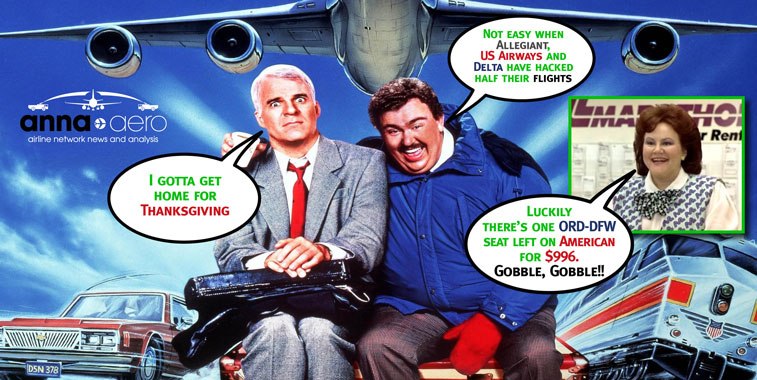 Of the 4,873 Hollywood movies about getting home for Thanksgiving, “Trains, Planes and Automobiles” is easily the best and most informative and should be compulsory viewing for any underpaid trainee Allegiant schedule planner (most of whom were probably born long after its 1987 release date).

In recent years airlines have become increasingly sophisticated at what might be considered one of the basic principles of managing an airline – matching supply with demand. Adjusting capacity between summer and winter seasons has been done for many years, but tweaking schedules by day of the week is something that airlines have only started mastering relatively recently. And then there are special events, such as Christmas and national holidays, such as Thanksgiving in the US. This major festivity, celebrated each year on the fourth Thursday in November (this year that was last Thursday 27 November), is associated with family reunions, and thus the need to often travel across the country, frequently by air.

Which US carriers adjusted their schedules most?

anna.aero wondered which US airlines responded most to these travel trends so data was collected on the number of daily flights operated by the 13 leading US carriers for the last three weeks of November and the first week of December. First we analysed how many fewer flights each carrier operated on Thursday 27th compared with Wednesday 26th. In a normal week there would typically be more demand on a Thursday than a Wednesday, but not during Thanksgiving. Of the 13 airlines, 10 operated at least 15% fewer flights on the Thursday than on the Wednesday, with ULCC Allegiant Air leading the way with a 65% reduction. However, Allegiant is something of a master of matching supply with demand on a daily basis, so this comes as no great surprise. Next up are US Airways and Delta Air Lines, who both operated only around half as many flights on Thanksgiving compared with the day before. The other major US carriers (American Airlines, Southwest Airlines and United Airlines) all reduced their schedule flights by between 30% and 40%, as did Virgin America. The only two big carriers who appeared to ‘ignore’ Thanksgiving were the ULCCs Frontier Airlines and Spirit Airlines who both made virtually no changes to their flown programme. 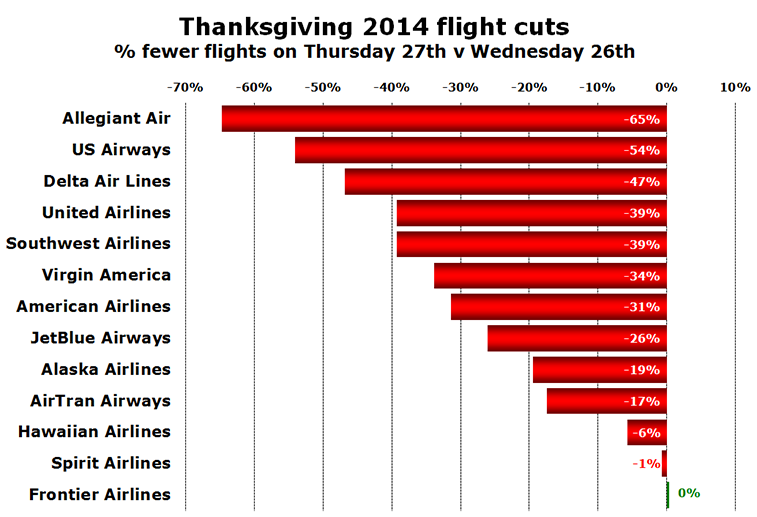 Next we analysed the number of flights operated on Sunday 30 November (the day many people head back home) and compared it with the following ‘normal’ Sunday, 7 December. Three of the country’s biggest airlines (Delta Air Lines, Southwest Airlines and United Airlines) each operated around 20% more flights on Thanksgiving Sunday compared with the following Sunday. All 13 airlines operated more flights on the last Sunday in November than on the first Sunday in December, though again Spirit Airlines seems to have made fewest changes to its schedules. 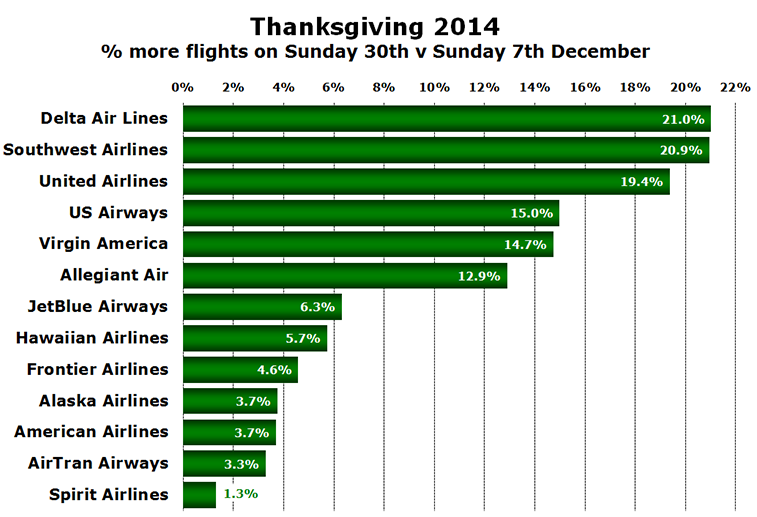 Delta busier than United … except on Saturdays

Looking at flights scheduled to operate across the airlines’ entire network (not just US domestic services) reveals how the big five airlines in the US compare. The Thanksgiving dip and peaks can now be seen more clearly in the context of the regular winter schedule. The difference in approach is fascinating as American, Delta and United also cut significant capacity on the Monday before Thanksgiving, while Southwest and US Airways did not. Delta also seems to have made significant network cuts on the Sunday before Thanksgiving, unlike its competitors. 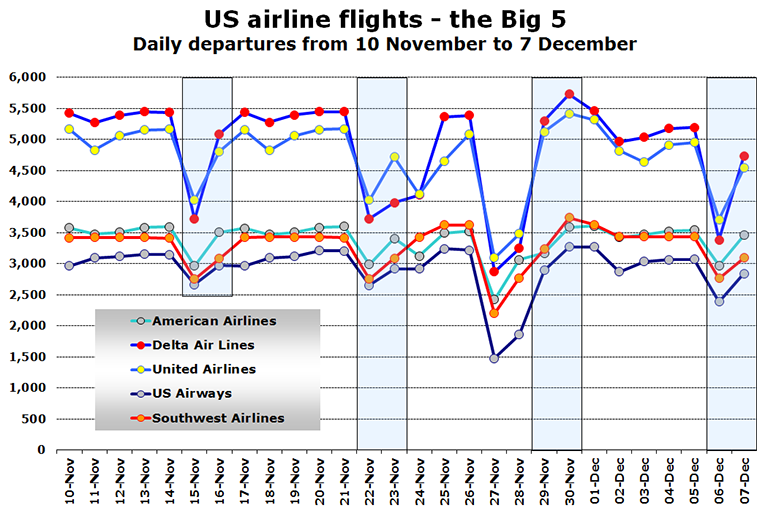 A comparison across the same period for six of the smaller significant carriers, shows, on the whole, less variation. While Spirit Airlines may have ‘ignored’ Thanksgiving, it has cut midweek flights in the week after Thanksgiving. Virgin America, possibly the airline with the highest proportion of business passengers among the six, did respond to Thanksgiving, and also typically operates fewer flights on Tuesdays and Wednesdays than on other week days. 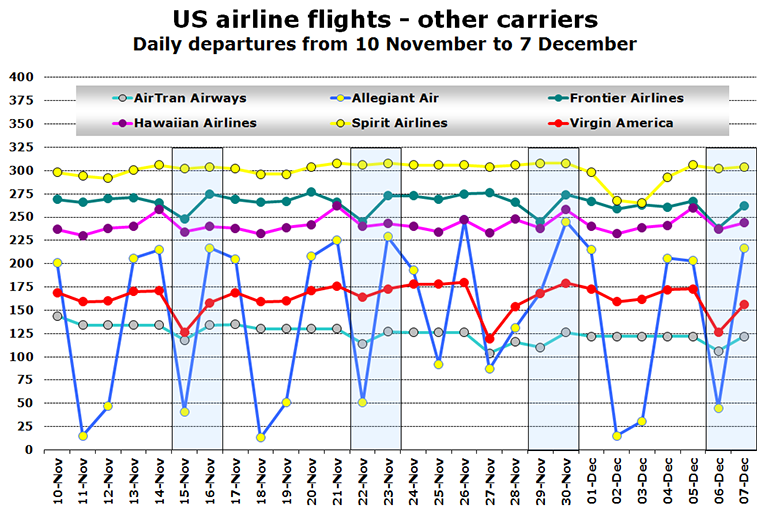 Allegiant Air is the most extreme airline when it comes to matching supply and demand. Focusing entirely on leisure traffic it operates the majority of its flights on just four days of the week – Monday, Thursday, Friday and Sunday. This can clearly be seen in the weeks before and week after Thanksgiving. However, during Thanksgiving week Wednesday becomes its busiest day of the week as might be expected.

With airlines better matching capacity with demand there are fewer examples of extreme airline pricing, but anna.aero was curious to see what fares were available for ‘last minute’ bookings. Checking various US airline websites on the morning of Wednesday 26 November we looked at various routes departing on the evening of Wednesday 26th November and returning as late as possible on Sunday 30th November.

Maybe some of our readers will have examples they would like to share with us of more extreme pricing, maybe on routes to/from smaller airports where there is less capacity. If so, let us know in the “Comment” section below. 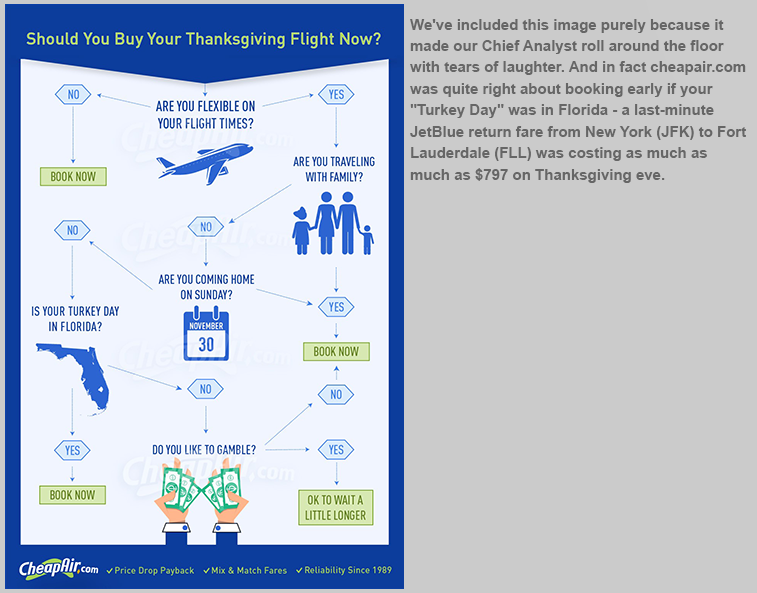