Sao Paulo Viracopos’ latest route launch is the 6,492-kilometre sector to Fort Lauderdale, which was inaugurated on 1 December by Azul Airlines, the third largest operator in Brazil in terms of weekly seats behind GOL and TAM Airlines.

Having a population of 12 million (classified as the largest city in Brazil), Sao Paulo is served by three airports, Sao Paulo Guarulhos, Sao Paulo Congonhas and Sao Paulo Viracopos, which handled a combined total of over 62 million passengers in 2013. Viracopos, the least busy gateway to the largest city in Brazil, contributed close to 9.3 million of those passengers and accounts for 4.4% of total annual seat capacity in Brazil this year. Furthermore, the airport serves as an operating base for Brazil’s third largest carrier in terms of weekly seats – Azul Airlines.

Under operational control of Aeroportos Brasil, Viracopos offers 59 non-stop services flown to Brazil, the USA, the Dominican Republic and Portugal (according to Innovata schedule data for this December). Interestingly, on 1 December, the airport attracted its first US carrier, as American Airlines touched down with thrice-weekly flights from New York JFK. The same day, Azul introduced its first international service, with the addition of daily A330-200 flights on the 6,492-kilometre sector to Fort Lauderdale. Following an increase of 4.9% in passenger numbers last year, when compared to 2012 figures, Viracopos established itself as the sixth busiest airport in Brazil (behind Belo Horizonte – 10 million, but above Rio de Janeiro Santos – 9.1 million), according to anna.aero’s American Airport Traffic Trends database. 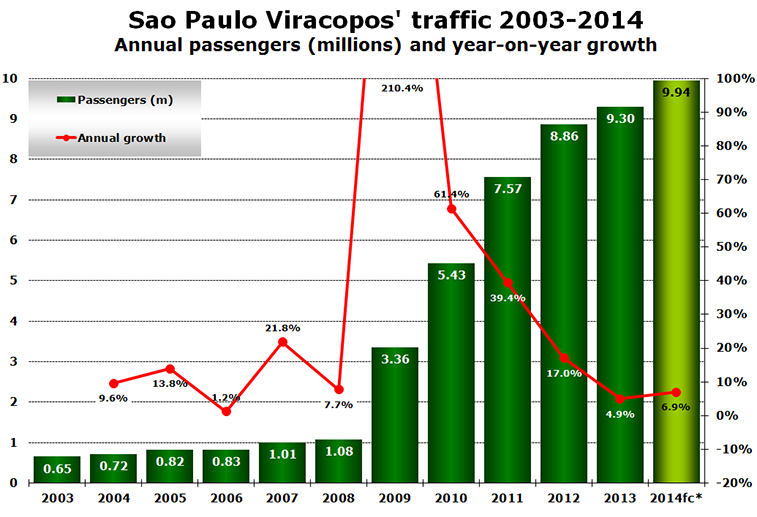 Analysis of Infraero data reveals that passenger traffic at Viracopos has grown visibly between 2003 and 2013, with an impressive average annual growth rate (CAGR) of 27% over this timeframe. The third busiest gateway to Sao Paulo handled around 9.3 million passengers in 2013, a number that increased from 655,000 noted 11 years ago. The establishment of Azul in May 2008, which made Viracopos its main hub, had a major impact on traffic flows to and from the airport, resulting in a three-digit increase of approximately 210% in 2009. In the first nine months of 2014, for which traffic data is already available, the airport posted an increase of 6.9% when compared to the corresponding period of 2013, with 7.3 million passengers handled until end-September. If Viracopos continues on its existing 2014 growth trajectory, anna.aero forecasts that it will achieve close to 10 million passengers this year.

SVID’s appraisal of Viracopos is “excellent”

Furthermore, entering Viracopos’ monthly passenger data for 2013 into anna.aero’s Seasonal Variation in Demand (SVID) calculator, the airport performs exceptionally well, producing a score of 0.46, an “excellent rating”. Nonetheless, the airport’s seasonality performance has worsened when compared to the score recorded last year (0.40). With over 70 seasonality performance evaluations completed so far this year, Viracopos has entered the rankings at the third position, between Doha (0.45) and Orange County (0.60).

To give Viracopos a fair evaluation, we also ran calculations on Guarulhos (0.74, excellent) and Congonhas (1.54, excellent). Against its airport peers from the Sao Paulo area, the airport performs better than the significantly larger Guarulhos (36 million annual passengers) and Congonhas (17 million), due to traffic being more evenly spread throughout the year. In addition, the seasonal lows for the three airports represent 81% (Viracopos), 74% (Guarulhos) and 65% (Congonhas) of their respective seasonal highs.

As of December 2014, a total of five airlines are serving Viracopos, with Azul being the clear leader. Classified as the third largest operator in Brazil, behind GOL and TAM Airlines, the airline commands 84% and 90% of all weekly seats and flights respectively and serves a total of 57 non-stop sectors from Viracopos, of which Santos is the most frequently flown destination, being served with 95 weekly flights. Ranking second, with a weekly seat share of 9.7%, GOL connects Viracopos to 10 domestic destinations and Santo Domingo in the Dominican Republic. Furthermore, a new operator at the airport, American introduced its second route on 2 December, when it added daily flights to Miami, utilising its 767-300s. 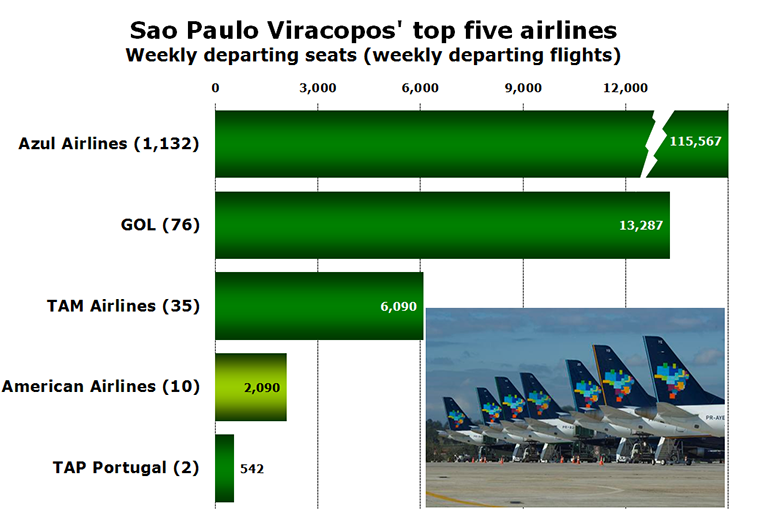 Weekly seat capacity has gone up 9.8% (when comparing data from this December with the same week last year), with Azul, GOL and TAM recording growth, while TAP Portugal saw its operations unchanged. Hence, GOL is the fastest growing carrier at Viracopos, posting a net annual growth in weekly capacity of 5,505 seats (+70%), coming as a result of adding operations to Porto Segura, Fortaleza, Maceio, Natal and Santo Domingo over the last 12 months. In addition, TAP retained its twice-weekly operations from Lisbon, which are served using a mixed fleet of the Star Alliance member’s A330-200s and A340-300s.

Santos continues to be top airport

Following a 56% increase in weekly seat capacity, Santos is still the top airport operated from Viracopos in 2014, having a market share of over 12%. At 407 kilometres away, the second major gateway to Rio de Janeiro is served by Azul (95 times weekly) and GOL (35 times). This is followed by operations to Brasilia, which has posted 19% growth in weekly capacity, due to Azul and TAM increasing their frequency from 38 times weekly to 48 times weekly, as well as from 13 times weekly to 22 times weekly respectively. On the other hand, seven of the top dozen destinations saw capacity fall this December, with the 737-kilometre sector to Goiania having experienced the greatest decrease (-37%). 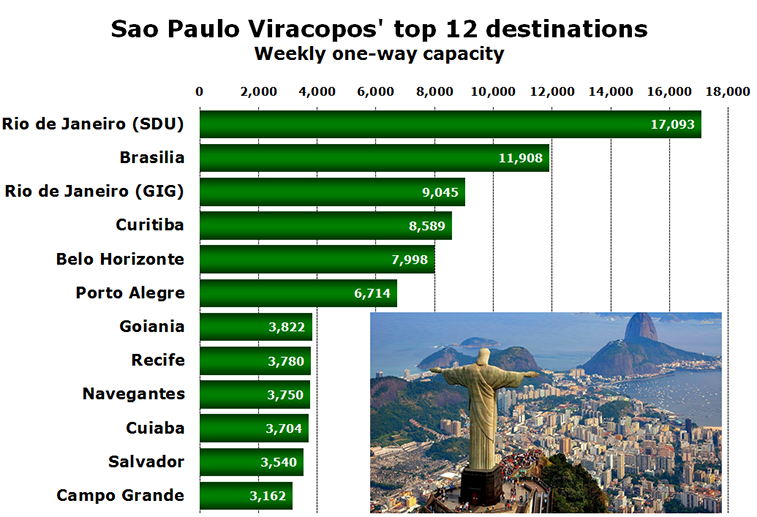 Overall, the top 12 destinations represent 60% of the total market, which is slightly down from the 63% recorded for the same week 12 months ago. Probably not surprisingly, the Rio de Janeiro state, having the second largest economy of Brazil, is served through four airports from Viracopos, namely Santos, Rio de Janeiro Galeao, Cabo Frio and Macae, with a combined 26,593 weekly flights.