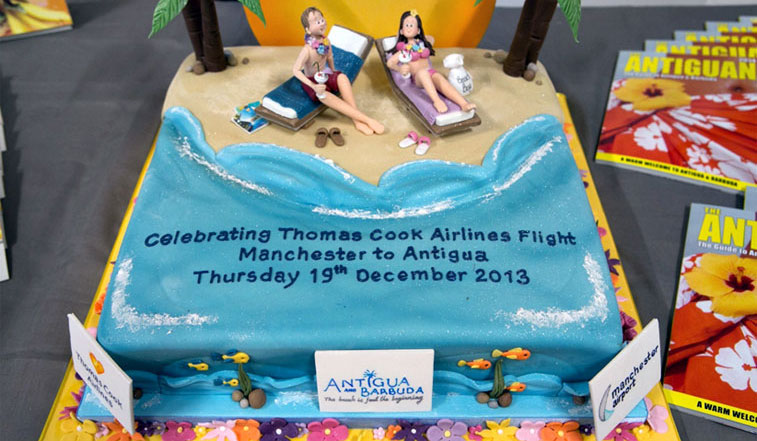 The last new route celebration we could find for Thomas Cook Airlines was almost a year ago – when it started operations from Manchester to Antigua. This is not surprising, as the carrier has spent most of the last decade contracting its customer base as it seeks to right-size in the light of ongoing competition from low-cost carriers.

Life has been tough for the UK’s charter airlines since low-cost carriers came onto their patch around 20 years ago. Their dominance of the traditional summer sun holidays (and winter sun and ski markets) to the likes of Spain and Greece has gradually been eroded away by the likes of easyJet and Ryanair, with their ‘package’ product losing favour with internet-savvy customers who preferred unbundled, dynamically-packaged holidays they arranged themselves, and their short-haul networks being increasingly marginalised to the edges of Europe and Africa. Thomas Cook Airlines, which was born in March 2008 as the operating carrier for the merged Thomas Cook and MyTravel leisure groups has endured this war of attrition, but it has seen its combined customer base reduced by over a third since 2005. 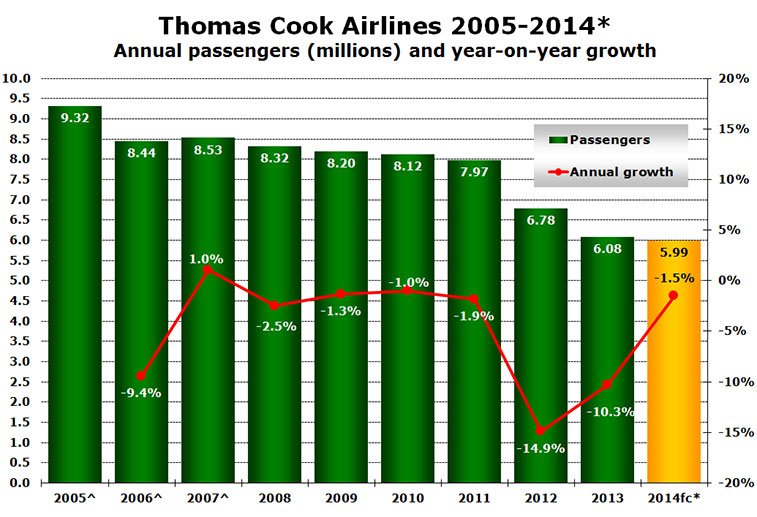 The airline’s decline has been worsened by financial uncertainty over its recent history, and has been shaken again recently with the surprise departure last week of the tour operator’s CEO Harriet Green, causing a 20% decline in its share price. That said, the carrier is still the UK’s sixth largest airline (after easyJet, British Airways, Thomson Airways, Flybe and Monarch Airlines) and is expected to carry close to six million passengers again in 2014, according the anna.aero forecasts.

While the tour operator has adjusted its business model to accommodate the insurgence of the LCCs, many of the traditional seasonal aspects which affect airlines like Thomas Cook are still clearly evident. The first of these seasonal challenges is the fluctuation in its summer and winter bases. This August, the airline flew from 13 UK airports, however looking at traffic data for this month, there are just eight in operation, with London Stansted, Cardiff, Doncaster Sheffield, Exeter and Norwich ‘closed’ for the winter. 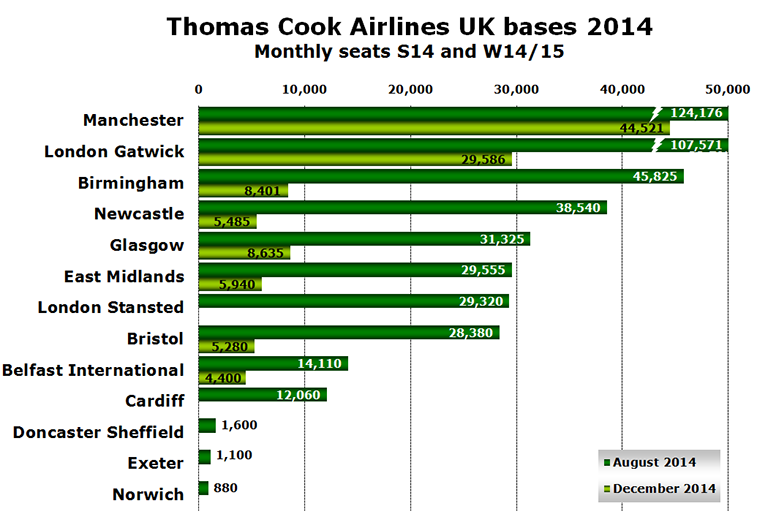 The variance between Thomas Cook’s summer (August 2014) and winter (December 2014) capacity commitments are very evident. While the airline offers only 36% of its summer seats at Manchester during the winter, the remaining seven operating airports offer significantly less in December than during the August peak: Belfast International (31%); Gatwick (28%); Glasgow (28%); East Midlands (20%); Bristol (19%); Birmingham (18%); Newcastle (14%). 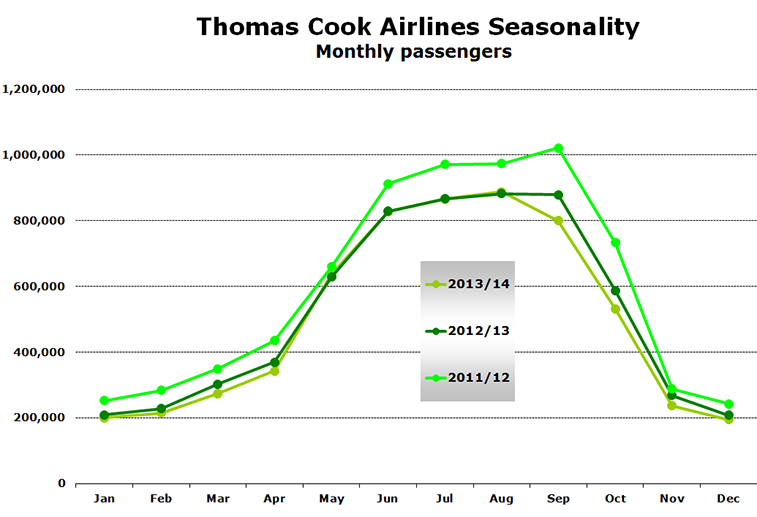 The airline’s monthly passenger traffic figures confirm the extreme seasonality that Thomas Cook faces each year. December is typically the worst month of the year because the ski season normally starts only in the middle of the month.

Thomas Cook’s top three country markets constitute over 78% of the carrier’s flights in the week commencing 7 August. Despite being the #1 country market, the airline’s weekly flights to Spain have been reduced by 7.4% when compared to the same week last year, whereas its capacity commitments to Turkey (+6.9%) and Greece (+11%) have both been increased. Thomas Cook’s biggest increase in weekly flights was felt in the Italian country market, as the carrier started weekly flights from both its Manchester and Gatwick bases to Venice Marco Polo, adding to its existing services from the same UK airports to Naples. The airline’s most significant capacity reductions were experienced in the markets to Egypt (-18%) and Cyprus (-13%). 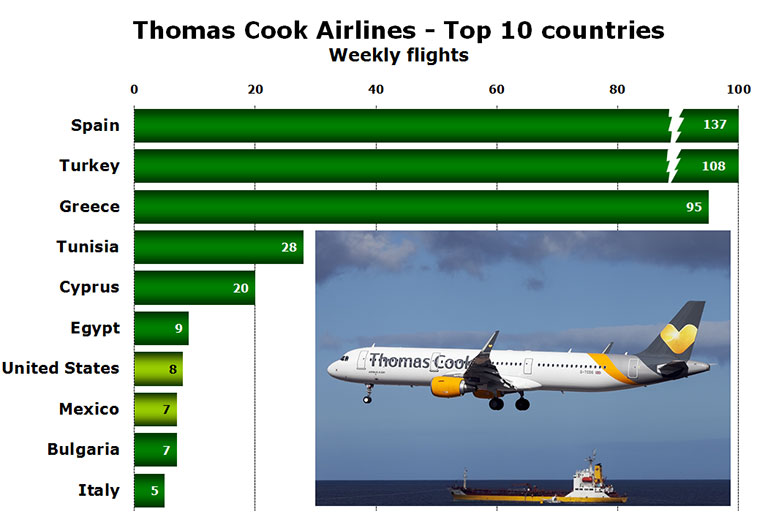 The rapid rise of LCC’s has increasingly forced airlines like Thomas Cook to serve markets where these new fierce competitors are less evident. Looking at the carrier’s flights for the same week in August five years ago, Spain was still the top market, although its share has declined from 44% to 31% of all flights in that time. Turkey and Greece were the next biggest country markets, however their shares have improved from 17% to 25% and 12% to 22% respectively. Over the same time period, Thomas Cook has departed the Canada, Morocco and Israel country markets, while Bulgaria and Italy are both new additions.