Over the past 12 months, Zimbabwe has seen the arrival of two new carriers, flyafrica.com Zimbabwe and fastjet, with the latter having touched down at Harare Airport on 5 August with twice-weekly flights from Dar es Salaam. Cutting the celebratory cake’s first slice is Ed Winter, CEO, fastjet.

While it is home to an estimated population of 13 million inhabitants, Zimbabwe covers an area of 390,757 square kilometres (around twice the size of Belarus). Rich in natural resources, including over 40 types of metals and minerals, the landlocked country in southern Africa achieved sovereignty from the UK in April 1980. In fact, the mining sector is the main catalyst for the country’s economy due to 40% of its foreign exchange being earned from the export of metals and minerals, while tourism is also an important industry for Zimbabwe. Therefore, the air transport sector plays a significant role in supporting the economic and social growth of the country, which is served through four commercial airports providing scheduled airline services this December, namely Harare, Victoria Falls, Bulawayo and Karibo.

Examination of Innovata annual capacity reveals that around one million one-way seats are offered on services involving Zimbabwean airports this year, representing an impressive increase of 44% over the previous year. Interestingly, all three major airports managed to post capacity growth when compared to 2013 figures, with Bulawayo recording the largest increase (287%), followed by Victoria Falls (52%) and Harare (28%). Interestingly, Kariba, which had not provided any commercial services since 2008, saw the return of scheduled services on 1 August, when Air Zimbabwe commenced thrice-weekly flights from Harare and Victoria Falls. 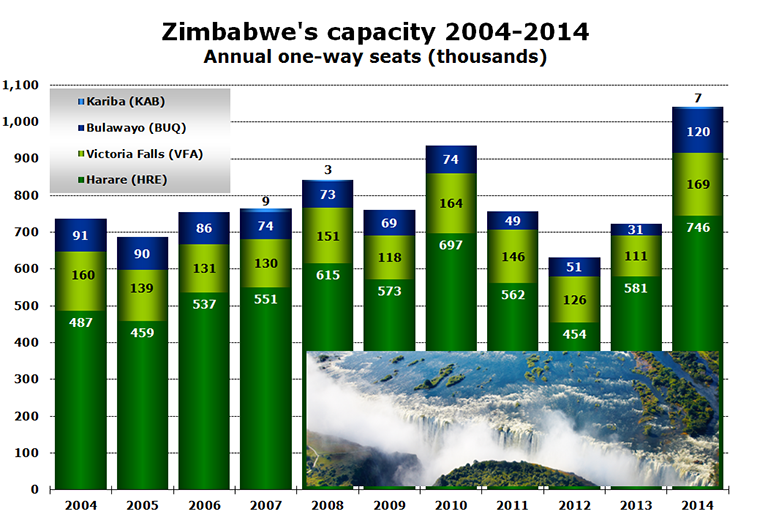 Overall, looking at the annual seat figures since 2005, the combined capacity of the Zimbabwean market grew by an average annual growth rate (CAGR) of 3.2%, with Harare outperforming (+4%) its airport peers from the country. Not surprisingly considering the country’s political and economic instability in recent years, the Zimbabwean air transport saw an uneven development between the 2004-2014 time frame.

Air Zimbabwe controls 32% and 34% of seats and flights

As of December 2014, Zimbabwe is served by a total of 12 airlines, with the national carrier Air Zimbabwe being the dominant player in this country market, as it controls 32% and 34% of all weekly seats and flights respectively. Following financial difficulties, the carrier ceased operations in late February 2012, but has resumed flights on some domestic and international sectors this year. This month, Air Zimbabwe operates eight airport pairs, of which three are international services to Johannesburg, from Harare, Victoria Falls and Bulawayo. Close analysis of the airline’s domestic operations reveals that Air Zimbabwe faces direct competition only on the 557-kilometre sector between Harare and Victoria Falls, from flyafrica.com Zimbabwe, which has introduced thrice-weekly flights on the route on 1 December. Ranking second with a weekly seat share of 23%, South African Airways serves Zimbabwe’s three major airports from Johannesburg and Durban. 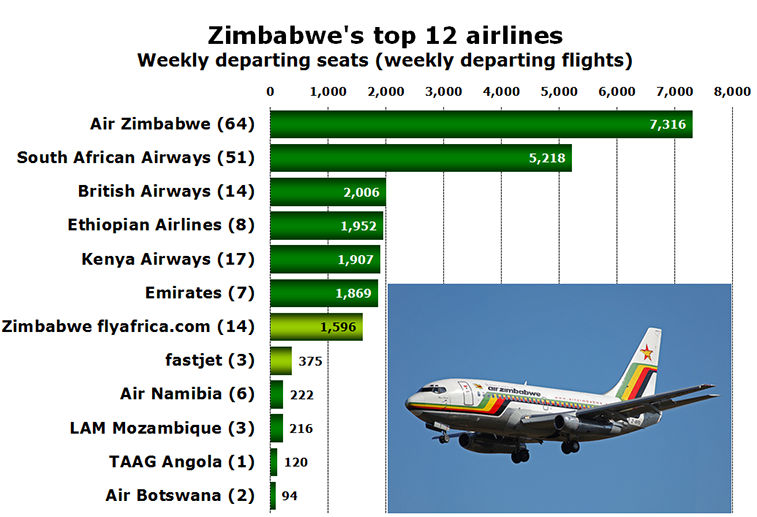 Total weekly seat capacity in Zimbabwe has gone up 69%, with only Air Botswana recording capacity decline, when comparing data from this December with the same week last year, while Air Namibia, Air Mozambique and TAAG Angola saw their operations unchanged. Over the past 12 months, Zimbabwe has seen the arrival of two new carriers (highlighted in bright green), namely fastjet’s twice-weekly flights from Dar es Salaam on 5 August as well as flyafrica.com Zimbabwe with three airport pairs, while KLM withdrew its thrice-weekly operations from Amsterdam operated via Lusaka.

Kenya Airways is the fastest growing operator, increasing its weekly capacity by 19% or 309 weekly seats due to the addition of three further weekly fights on the 402-kilometre link between Lusaka and Harare, a sector operated as part of its nine weekly Nairobi-Harare operations. By comparison, Air Botswana noted -33% capacity decline as a result of reducing its frequency from Gaborone to Harare from thrice-weekly to twice-weekly.

A total of 10 country markets can be reached non-stop from Zimbabwe according to Innovata schedule data for this December. At around 10,493 weekly seats and 59% more than in the corresponding week last year, neighbouring South Africa tops the list of country markets served, with a combined total of 87 weekly flights operated by British Airways, South African, Air Zimbabwe and flyafrica.com Zimbabwe, with the former operating fully with its franchisee Comair. Furthermore, the domestic sector represents 22% of all weekly capacity, being served by the flag carrier and flyafrica.com Zimbabwe. 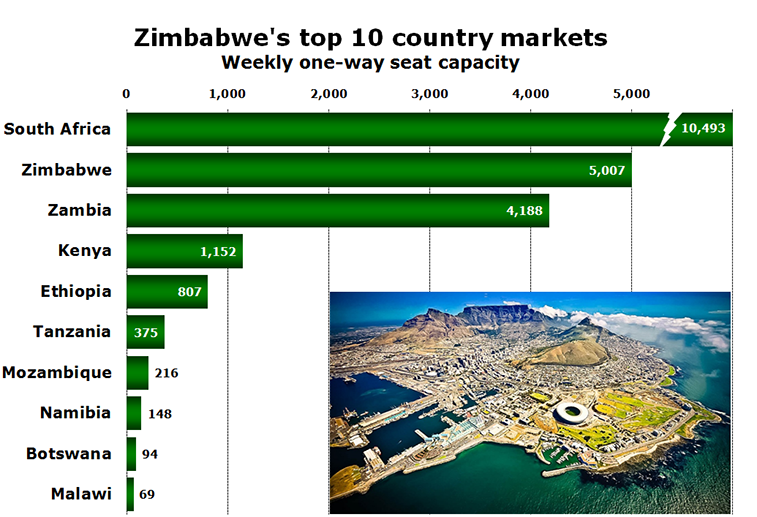 South Africa is not only the biggest country market served from Zimbabwe, but also the fastest growing one, with a net growth of 3,874 weekly seats or 59% over the last 12 months. This is followed by Ethiopia with an increase of 8.8% and Kenya with 2.1%. On the other hand, operations to Botswana and Zambia posted decline of 33% (-47 seats) and 7.6% (-341 seats) respectively. 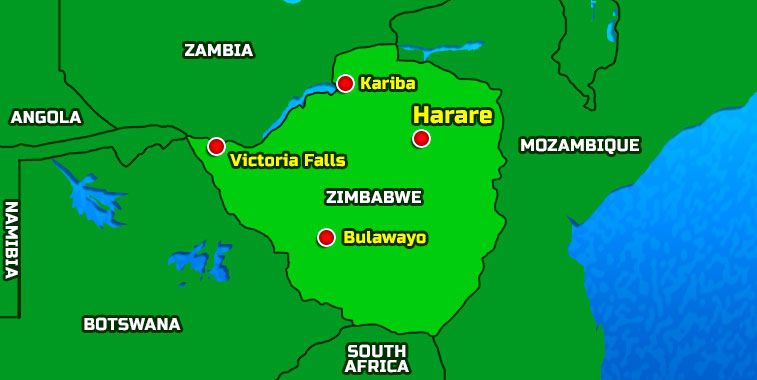