Lining up like contestants on an aviation-themed quiz show, airline, airport and other officials attended 9 Air’s launch ceremony at Guangzhou Airport on 2 December. The airline’s first two 737-800s are both leased from Singapore-based Transportation Partners, a company set up by Indonesia’s Lion Air.

Following the relaxation of government rules China is witnessing something of a boom in new airline start-ups. However, many of these appear to be off-shoots, subsidiaries, or related to existing carriers. The latest to start operating flights is 9 Air (IATA code AQ), a joint venture in which Juneyao Airlines is the majority shareholder, which operated its first flight on Tuesday 2 December. Unlike its parent company which operates an all-Airbus fleet, 9 Air has launched with two 189-seat 737-800s, which it has leased from Singapore-based Transportation Partners, a company set up by Indonesia’s Lion Air.

Claiming to be ‘The First LCC in Central and Southern China’, the airline’s inaugural flight was between its base at Guangzhou and Zhanjiang. The flight was full of invited guests rather than fare-paying passengers. According to local sources the airline is still working on sorting out its on-line booking system. Given the airline’s name, the fact that it plans to sell tickets for 9 Yuan, 99 Yuan and 199 Yuan will come as no surprise.

Last year, Guangzhou Baiyun International Airport handled 52.5 million passengers, making it China’s second busiest after Beijing. Analysis of schedule data for December shows that China Southern Airlines accounts for almost half of all flights at the airport with no other carrier responsible for more than 10% of flights. 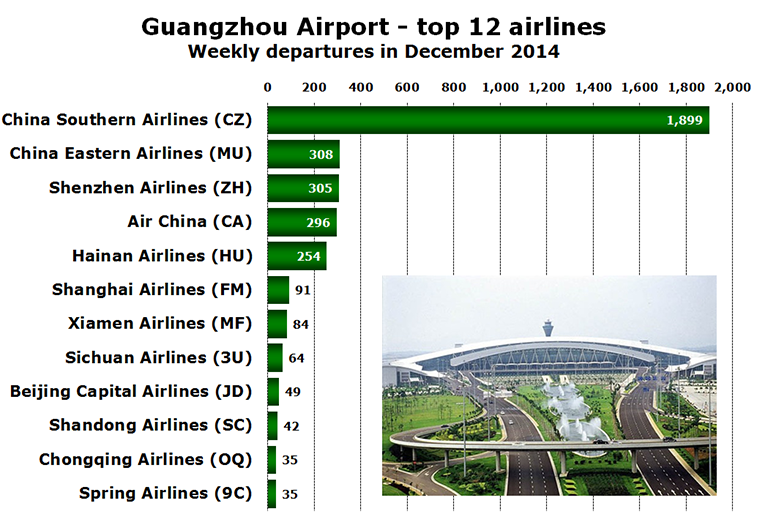