Established in 1918 as Mkeja Airport by the German colonial Government, Dar es Salaam Airport, perhaps better known as Julius Nyerere International Airport (due to being renamed in 2006 after the nation’s first president), is the main gateway to the largest and richest city of Tanzania. It caters for a population of close to 4.3 million, and serves as an operating base for fastjet and Precision Air. Under operational control of Tanzania Airports Authority (TAA), Dar es Salaam offers 30 non-stop services flown to 18 countries in Europe, Africa and the Middle East, according to Innovata schedule data for this December. In fact, the airport has become increasingly attractive for network planning community as Air Seychelles touched down for the first time on 2 December with twice-weekly flights from Mahé. 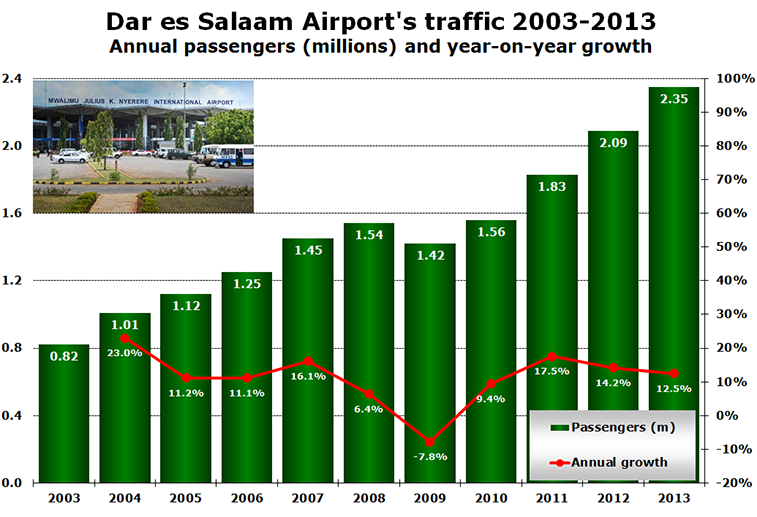 Analysis of data facilitated by the airport authority reveals that passenger traffic at Dar es Salaam has grown impressively between 2003 and 2013, with an average annual growth rate (CAGR) of 10% over this timeframe. The airport handled close to 2.4 million passengers in 2013 (a new record high), a number that increased from the 822,398 recorded 11 years ago. In addition, when compared to 2012 figures, Dar es Salaam’s traffic increased by almost 13% last year. Overall, its passenger numbers experienced growth since 2003, with the exception of 2009, when a decrease of 7.8% was noted due to the global economic recession strongly affecting the air transport industry.

While a total of 20 carriers operate from Dar es Salaam, the top 12 airlines command over 93% of weekly seats this December. It was 2013’s #1 airline, Precision Air’s 41% capacity decrease over the last 12 months that has allowed low-cost carrier fastjet to steal top-spot following its own 91% growth, meaning it has become the largest carrier operating from Dar es Salaam with a market share of 25%. The airline, which also controls over 18% of all weekly departures, operates a total of seven non-stop routes from Dar es Salaam, of which Mwanza is the most frequently flown destination, being served with thrice-daily flights. Interestingly, four of these services are international links, with the 1,072-kilometre sector to Entebbe in Uganda being the most recently new addition on 16 September. Ranking second with a weekly seat share of 12%, Emirates connects Dar es Salaam to Dubai with 12 weekly flights using a mixed fleet of its 777-200s, 777-300s as well as A330-200s. 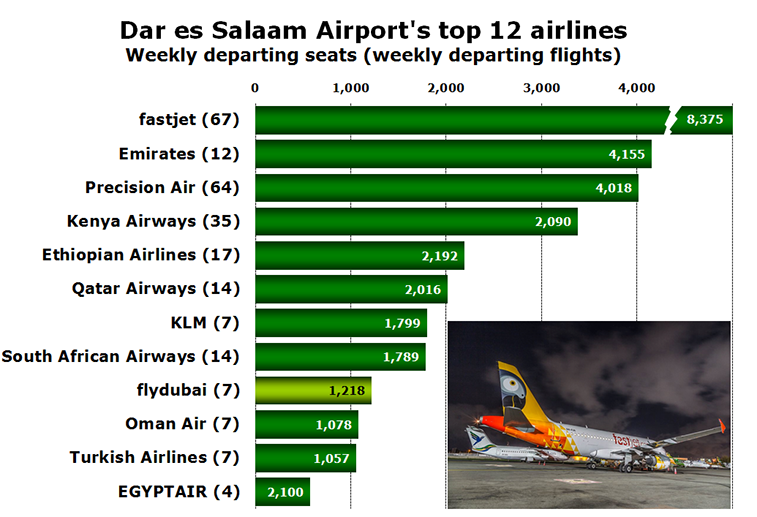 Weekly seat capacity for this December has gone up 29% (when comparing data with the same week last year), with seven of the top dozen operators recording capacity growth, while Qatar Airways, Oman Air and EGYPTAIR saw their operations unchanged. Moreover, Emirates’ LCC subsidiary – flydubai – landed for the first time at the airport with daily flights from Dubai on 16 October. Besides flydubai and Air Seychelles, Dar es Saalam has seen the arrival of Auric Air with five domestic airport pairs and Interair South Africa’s twice-weekly flights from Ndola, while Air Uganda and Air Astral ceased their operations to Entebbe and Dzaoudzi respectively. Emirates, is the fastest growing carrier at Dar es Salaam, posting a net annual growth in weekly capacity of 2,356 weekly seats, coming as a result of increasing its frequency on the 3,961-kilometre sector from Dubai by five weekly flights.

Dubai is top destinations in 2014

Following an impressive triple-digit increase of 200%, Dubai is the top destination served from Dar es Salaam in 2014, accounting for a market share of 16%. The most populous city in the UAE is served by both Emirates and flydubai with a combined 19 weekly departures from Tanzania’s largest and richest city. This is followed by operations to Nairobi, which has managed to climb one position when compared to data from the same week last year, as weekly capacity has grown by 692 seats or 24%. Kenya Airways managed to increase its frequency on the sector to the Kenyan capital from four times daily to five times daily. By comparison, the domestic destinations of Kilimanjaro (-6%) and Mwanza (-17%) are the only cities of the top dozen that have witnessed capacity fall this December. 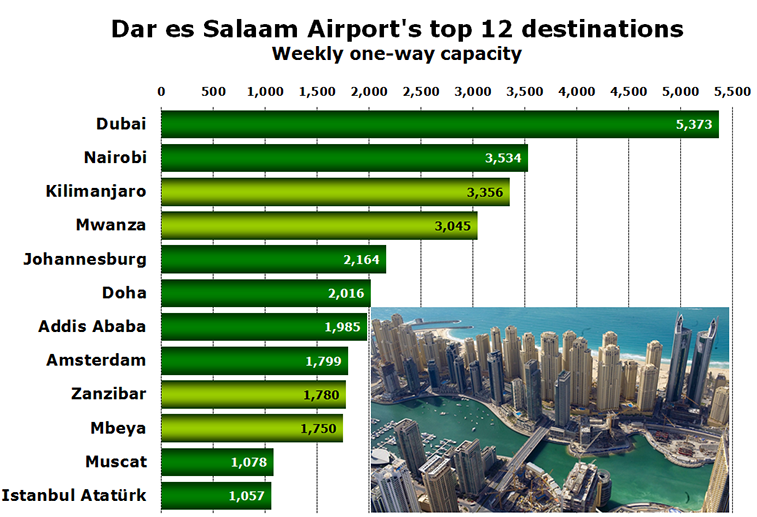 Overall, the top 12 destinations represent 85% of the total market, which accounts for the same market share recorded for the corresponding week 12 months ago. Interestingly, four domestic destinations break into this year’s top dozen (highlighted in bright green), namely Kilimanjaro, Mwanza, Mbeya and Zanzibar, out of which the first three are served by fastjet with a combined total of 53 weekly flights. While Dar es Salaam has seen the addition of 11 new destinations this year, it has also witnessed the withdrawal of Precision Air’s services to Moroni-Hahaya in the Comoros and ZanAir’s domestic operations to Pemba Island.