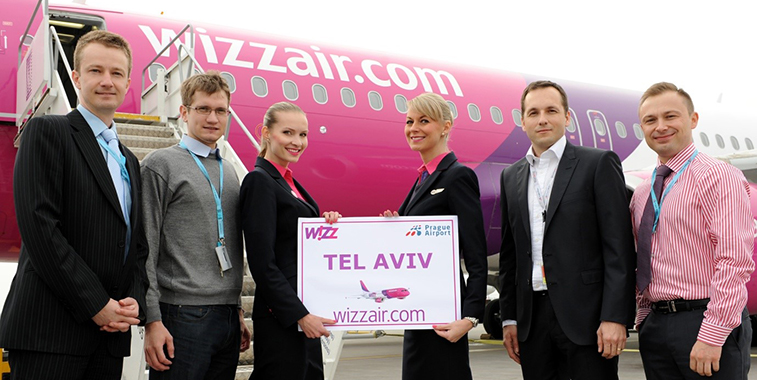 Wizz Air is the fastest-growing airline among Tel Aviv Ben Gurion Airport’s top 12 carriers, with capacity growth of 150% this summer and the launch of new routes to Katowice and Vilnius (both October 2013), Cluj-Napoca and Warsaw (both November 2013), Prague (March 2014) and Sofia (May 2014). Its older routes are to Bucharest (started June 2013) and Budapest (started December 2012). As a result, Wizz Air was Ben Gurion Airport’s ninth biggest carrier by weekly seats this summer.

The demand for travel to and from Israel looks set to reach a record high in 2014, despite a rocket attack in June that landed just a mile from Tel Aviv’s Ben Gurion Airport. In the first half of this year passenger numbers had been up 14% year-on-year, but July, August and September saw year-on-year traffic declines, before October figures revealed growth once more. As a result anna.aero forecasts that in 2014 Ben Gurion Airport will handle more than 15 million passengers for the first time in its history. 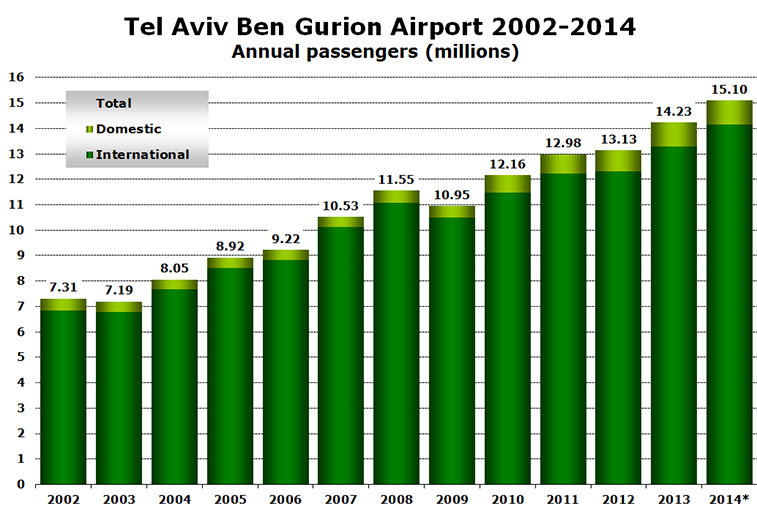 Source: IAA. *anna.aero forecast based on data for first 10 months.

Apart from Ben Gurion Airport, Israel has a number of smaller airports. These include Sde Dov Airport (SDV) which is closer to Tel Aviv and offers domestic flights to Eilat Airport (ETH). Eilat, which is on the northern tip of the Red Sea, has a relatively short 1,900-metre runway, so international visitors to the beaches and coral reefs of the Red Sea either have to take a connecting flight from Ben Gurion, or fly to Ovda (VDA) which has a longer runway but is further away from Eilat. There are plans to build a new airport at Timna which will ultimately replace Eilat and Ovda airports, while the government has announced Sde Dov Airport will close in the next few years to be replaced by a mix of housing, hotels and green spaces.

Focusing on Ben Gurion Airport, analysis of schedule data for the last two summers reveals that while national carrier El Al is by far the busiest carrier with around 65,000 weekly departing seats (or 35% of the airport’s total), growth is being driven by foreign carriers. Turkish Airlines operates seven daily flights in summer from its main Istanbul Atatürk hub, but also began daily flights from Istanbul Sabiha Gökçen last October, making it the airport’s second biggest carrier by seats. 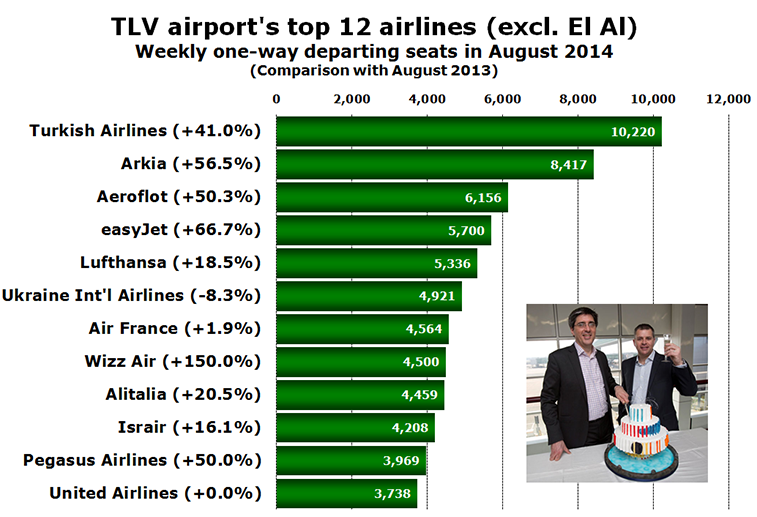 Arkia (or Arkia Israeli Airlines) is Israel’s other main airline. Operating with a fleet of two 757s, two Embraer E-jets and five ATR 72s, the carrier operates a mix of domestic flights and international services. Aeroflot’s growth is explained by it taking over St Petersburg services from Rossiya and Rostov-on-don services from Don Avia. easyJet’s growth has been more organic, with a doubling of routes from four to eight, thanks to the addition of new links from Rome (September 2013), Berlin (February 2014), Milan (March 2014) and London (April 2014).

However, the fastest-growing airline at Ben Gurion Airport during the last year has been Wizz Air. Between October 2013 and May 2014, the Central European LCC has added new routes from Cluj-Napoca (Romania), Vilnius (Lithuania), Katowice and Warsaw (Poland), Prague (Czech Republic) and Sofia (Bulgaria). With eight destinations in total it equals easyJet for offering the most destinations of any foreign carrier from Ben Gurion.

Other new services launched during 2014 include Blue Air from Bucharest, Jetairfly from Brussels, Meridiana from Verona, Norwegian from Copenhagen, TAROM from Iasi, transavia.com France from Paris Orly and Volotea from Palermo.

US is #1, Turkey growing fast and Lithuania new

Measured by weekly seats, the leading country markets from Ben Gurion this summer were the US, Germany and France, with fast-growing Turkey in fourth place. The US services comprise El Al’s non-stop flights to Los Angeles, New York JFK and Newark, while Delta Air Lines also serves New York JFK, United Airlines serves Newark and US Airways flies to Philadelphia. The German and Italian markets have both been aided by easyJet’s additional services while Romania and the Czech Republic have both seen significant capacity increases thanks to Wizz Air’s increased presence. In total the airport had non-stop services to 47 countries this summer, one more than last summer as a result of Wizz Air’s new service to Vilnius in Lithuania. 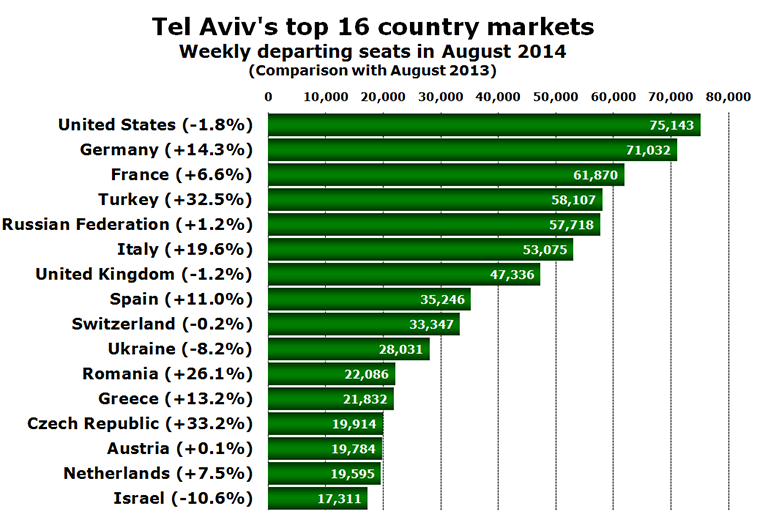 Looking ahead to 2015, a number of airlines have already revealed plans to add new services to Tel Aviv. These include Aegean Airlines to Rhodes, Air Europa to Madrid, Germania to Hamburg and Karlsruhe/Baden-Baden, Pegasus Airlines to Antalya, and Ukraine International Airlines to Kharkiv and Lviv. Kenya Airways is also planning to start services to Nairobi, while Hainan Airlines is also expected to start non-stop flights from Beijing at some point next year. easyJet had planned to add services from its new Hamburg base this year, but this is now likely to happen at some point next summer.

El Al launched no new routes in 2014 with Larnaca and Venice its two most recent network additions, both in November 2013. However, in response to the growing challenge of Europe’s LCCs it created UP, a low-cost brand that operates under El Al’s ‘LY’ code with a few 737-800s. UP launched at the start of the summer 2014 season and operates just five routes from Tel Aviv to Berlin, Budapest, Kiev, Larnaca and Prague and does have its own dedicated website. El Al itself has announced that it plans to start a new thrice-weekly service to Boston next June using its 767-300s. However, this has yet to be ratified by the airline’s board. Budapest was one of five European cities to find its El Al service to Tel Aviv replaced by the carrier’s LCC brand UP at the beginning of the summer 2014 season. The other routes flown by UP are Berlin, Kiev, Larnaca and Prague.