Christchurch and China Airlines show off ‘Arch of Triumph’ certificate 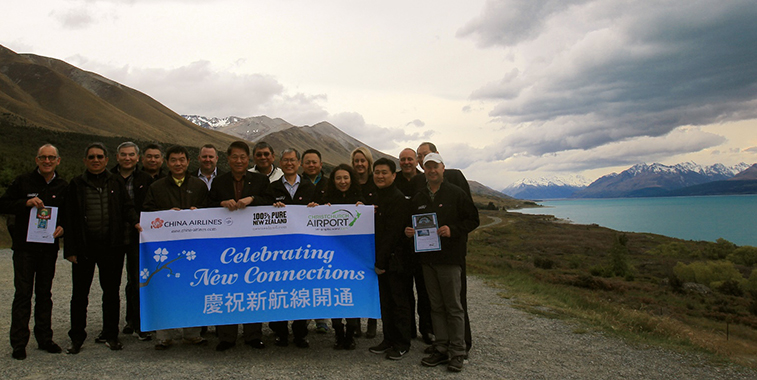 Got to be one of the most impressive back drops for a certificate picture we’ve ever received. The Christchurch Airport team poses with colleagues from its new serving carrier China Airlines which launched services from Taipei Taoyuan last week.

Dar es Salaam has provided Africa with its second ‘Arch of Triumph’ win of 2014, but perhaps more importantly it now represents the region inside the top 10 FTWAs of the year, albeit in equal 10th spot. It has been nine weeks since any airport has managed to get a spot on the leader board – Brussels Airport being the last in October with a score of 36.9 ‒ so the Tanzanian airport’s effort this week is even more noteworthy. The African win also sees the region draw level with Australasia at the foot of the inter-regional table. If either region manages to secure a win next week, the last of 2014, it will mean a far more respectable mid-table finish alongside the Middle East (which has three wins). The rest of the world (everywhere apart from Europe) now has 17 wins, still way behind Europe which has recorded 28 wins (62% of the 45 in total) over the last 12 months. Keep Monitoring! 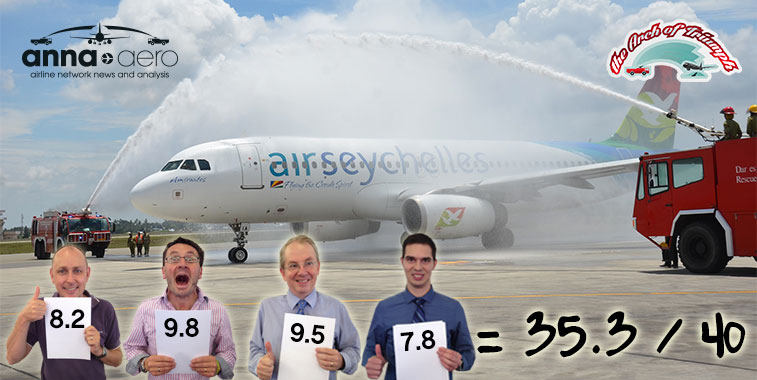 The first of three FTWAs for three Air Seychelles launches – and the best of the trio and the best this week.

Judge’s comments: A busy new route week for Air Seychelles, but what we want to know at anna.aero is whether the same A320 was used on all three launches? If so, it is probably now the cleanest aircraft flying anywhere in the world this week. 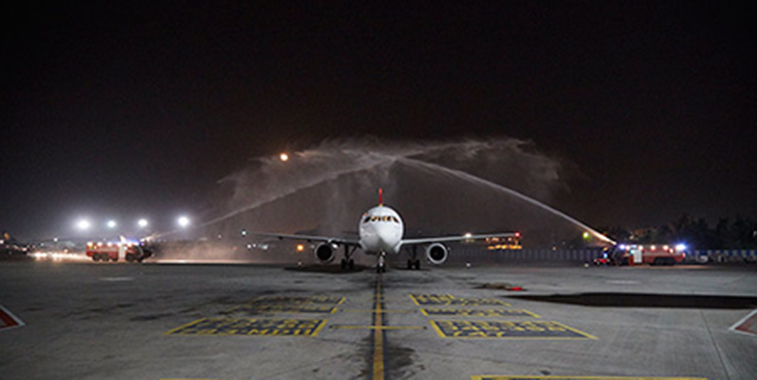 Judge’s comments: This Air Seychelles aircraft was scheduled to arrive in Mumbai at 0255, which let me tell you, is either really late at night or really early in the morning, depending on when your shift starts and ends. Despite the hour, Mumbai’s finest put on a great FTWA display worthy of more pleasant time of the day. Bet none of the marketing department were there at that time of the day. 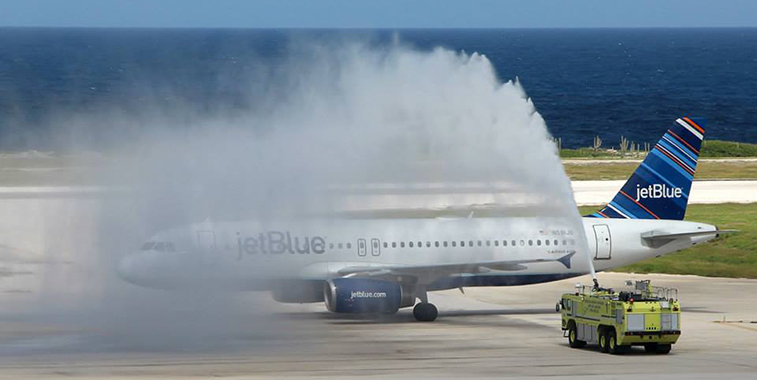 Is that water or dry ice coming out of that tender??

Judge’s comments: The special effects department in Curaçao were clearly working overtime this week for the launch of JetBlue’s service from JFK. Most of our judges were unsure as to whether this was water coming from the nozzle of the tender in view, or that the firefighters were using dry ice. However, head judge Paul (he pays our wages) brought it to the attention of the three remaining judges that this was in fact an unusual ‘Blue Curaçao’ style FTWA which is rarely seen off the Caribbean island. He added: “This is a near perfect example of this tricky, yet colourful style of FTWA.” 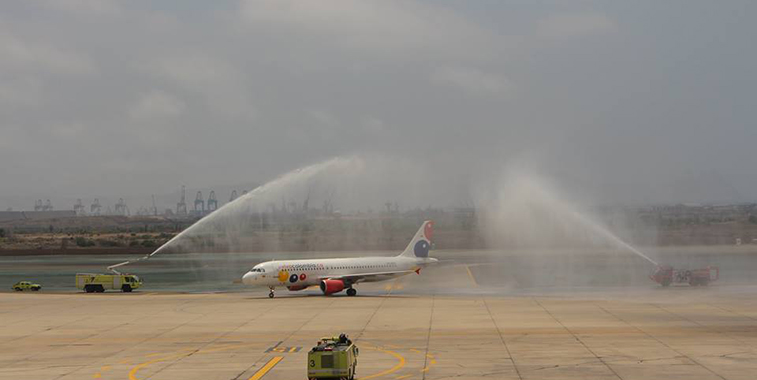 Judge’s comments: Perhaps this water arch from Lima is meant to be emulating the cranes serving the Pacific Ocean port in the background or even the snowy peaks of the Andes which run through Peru. Whatever happened here, this wind-affected FTWA did not turn out well. A low-cost arch for a new LCC. No es bueno Lima!! 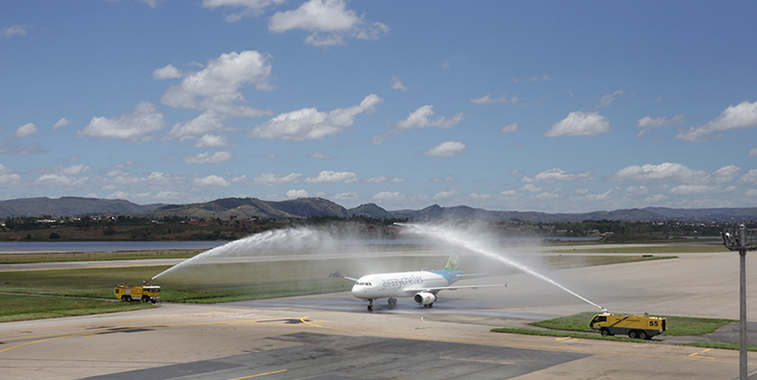 When you mix your tenders on an FTWA, you often get a mis-match in water pressure like this.

Judge’s comments: A couple of classic FTWAs errors have been made here in Madagascar. Mixing an old tender with a newer one often results in a mis-match in water pressure, resulting in one arm of the arch reaching the aircraft and the other not. The second problem is the delayed start to the spray, which has meant the aircraft is almost past before the water has had time to flow. 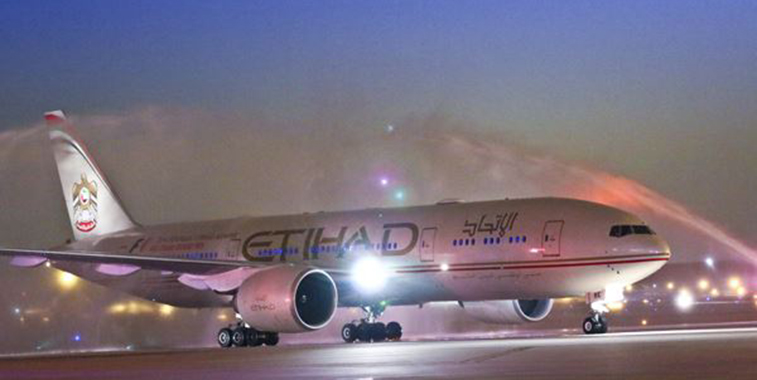 Judge’s comments: Everything is big in Texas. Big ranches, big hats and big airports. That said, this FTWA is a little on the snug side, with the water jets from DFW’s finest unlikely to clear the 18.6m (around 61ft for our American readers) tail height of this 777-200LR. However, this FTWA still scores big, but only enough to secure second spot this week. 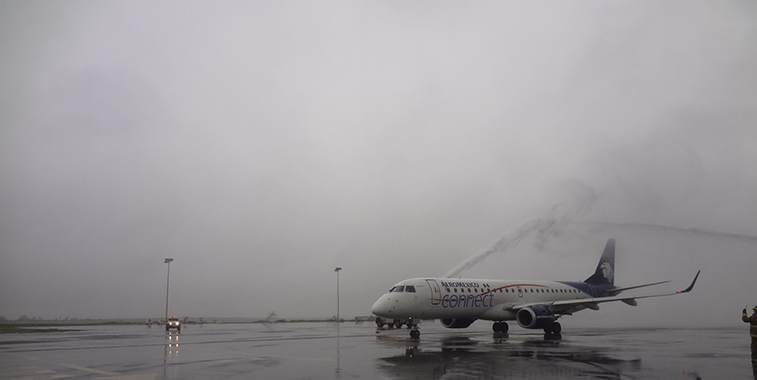 This must be the most miserable weather ever recorded for an FTWA.

Judge’s comments: Airport marketing departments can only arrange so much for inaugural flights…gifts for the passengers (check), new route cake (check), weather…errrr who’s sorting that? Wasn’t Janice meant to be arranging a nice sunny day? Or was it Brian?? Whether it was Janice or Brian, we’ll never know, but a brave effort was made by all on this hideous, grey, rainy, miserable day in New York. 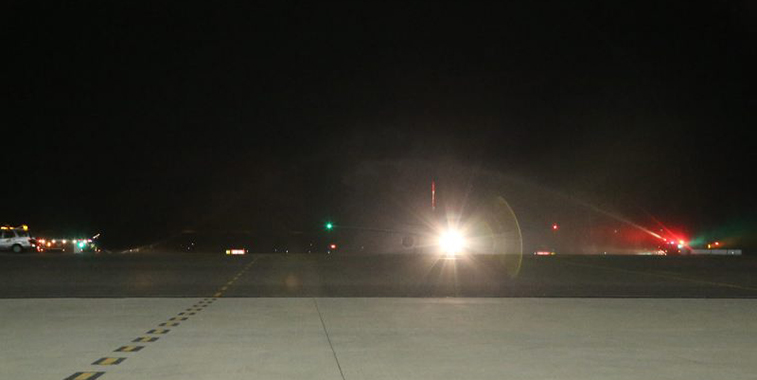 Out there somewhere is an FTWA…promise…

Judge’s comments: The airport lighting at Hyderabad has clearly let down what might have been a pretty good FTWA. Hopefully some heads are rolling in the Ops or Airfield Engineering departments for that one. Failing that, you could of course move the fire tenders a bit closer to the terminal and the photographer.