On 21 November, JetBlue Airways commenced daily services to Lima from Fort Lauderdale – its third busiest hub – which is connected to 33 non-stop destinations this December. Addressing the audience at the US gateway shortly before the inaugural flight is JetBlue’s EVP, Eash Sundarum.

Fort Lauderdale Airport (also known as Fort Lauderdale – Hollywood International Airport) is an intercontinental gateway to the state of Florida, and it is also the third busiest hub for USA’s fifth biggest carrier in terms of passengers carried in 2013, namely JetBlue Airways. This December, Fort Lauderdale offers around 74,000 fewer seats than the first busiest airport for JetBlue – New York JFK, but has managed to reduce the gap between itself at JFK by 433 seats over the last 12 months. Furthermore, the gap between Fort Lauderdale and the low-cost carrier’s second base at Boston (which is 29,190 weekly seats bigger) has narrowed by 3,900 weekly seats over the same timeframe. Overall, all three major bases of JetBlue posted capacity growth, with Fort Lauderdale (+18%) outperforming JFK (+7.6%) and Boston (+7.3%).

Examination of data facilitated by US Department of Transportation reveals that JetBlue Airways handled 4.4 million passengers at Fort Lauderdale in 2013, representing an increase of 9.9% when compared to 2012 figures. Nonetheless, for the first 10 months of 2014, for which traffic data is already available, the LCC posted an increase of 14% when compared to the corresponding period of the previous year, with close to 4.2 million passengers achieved at the airport until end-October. If JetBlue continues on this growth path, it will handle close to five million passengers at Fort Lauderdale in 2014, based on anna.aero forecasts. 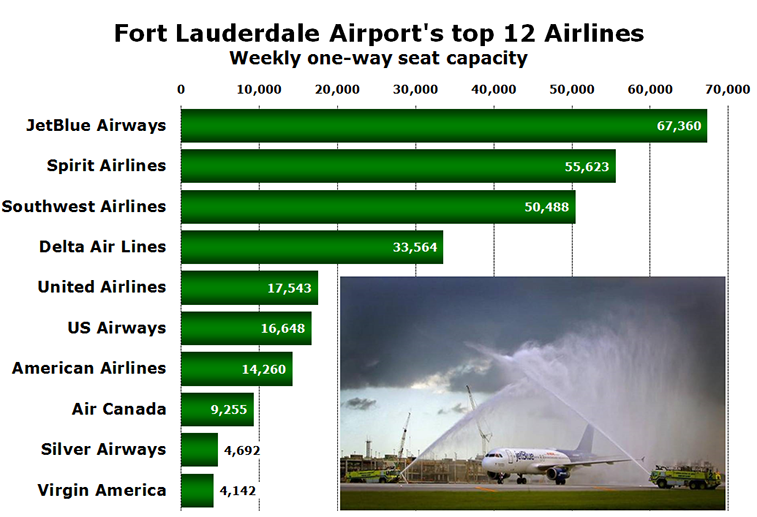 Analysis of Innovata schedule data for this December indicates that the low-cost airline is the market leader at Fort Lauderdale, with a weekly seat share of 22% (1.5% more than in the corresponding month of 2013), followed by Spirit Airlines (with 18%) and Southwest Airlines (17%). Moreover, domestic traffic represents 75% of total seat capacity JetBlue offers out of Fort Lauderdale, giving it a 21% share of domestic capacity at the airport (exactly the same market share as Southwest, but above Spirit with 17%). On the other hand, JetBlue leads the international market out of Fort Lauderdale, controlling 25% of total seat capacity, followed by Spirit and Air Canada at only 23% and 14% respectively. In fact, the carrier expanded its international offering from Fort Lauderdale on 21 November, when it commenced daily flights to Lima in Peru utilising its A320s.

A total of 33 destinations served from Fort Lauderdale

For the week being analysed, JetBlue operates a total of 33 non-stop routes from Fort Lauderdale, with an average weekly frequency of 15. By comparison, the airline offers 62 destinations from JFK and 50 from Boston, both airports being served with an average weekly frequency of 16 per network point. The airline’s top 13 routes from Fort Lauderdale account for 69% of all weekly flights (down 7% from last year’s figures), of which JFK is still the most frequently flown destination. 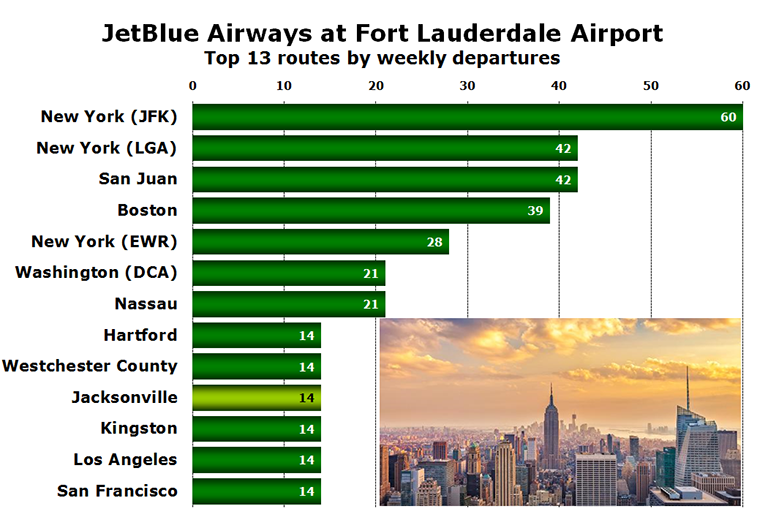 JetBlue’s weekly departures at Fort Lauderdale posted double-digit growth of 15% this December, with only the 1,714-kilometre sector to New York Newark decreasing, as a result of the carrier having reduced its operations by five weekly flights, while services to New York LaGuardia, Washington Reagan, Hartford, Westchester County, Kingston, Los Angeles and San Francisco have remained unchanged. Besides this, the 293-kilometre sector to Nassau is the fastest-growing airport pair (+50% or an additional daily departure). Served with twice-daily flights, Jacksonville (highlighted in bright green) is a new entrant into this year’s ranking, as the LCC introduced operations to the largest city in the state of Florida on 29 October.

JFK is also #1 route by ASKs

Analysis of which of JetBlue’s routes from Fort Lauderdale offer the most capacity measured by ASKs (Available Seat Kilometres) still sees JFK top the ranking. Interestingly, only two of the top 13 airport pairs are international services (Bogota and Lima), both of which are routes to South America. Overall, JetBlue serves a total of nine international country markets from Fort Lauderdale this December, with Colombia being the most extensively served, with a combined 26 weekly departures to Bogota, Cartagena and Medellin. 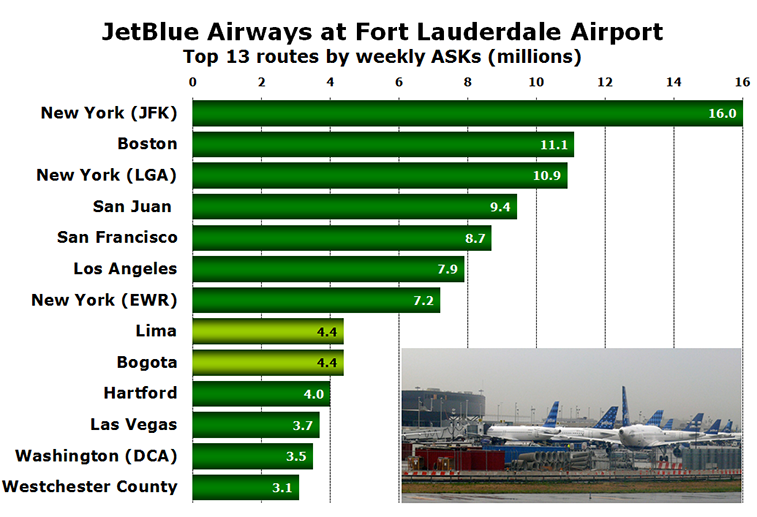 The 1,765-kilometre sector to Westchester County is the fastest growing route (+25%) this December (when compared to data from the corresponding week last year), due to JetBlue replacing seven weekly 100-seat E190 flights with 150-seat A320 operations. On the other hand, the Fort Lauderdale-Washington Reagan route provided the greatest capacity fall (-13%). On 29 October, Jacksonville Airport welcomed with a cake ceremony, JetBlue Airways’ twice-daily flights from Fort Lauderdale, which are operated by the LCC’s E190s.