On 25 November, Ruili Airlines celebrated with a special ceremony at Kunming Airport the arrival of its first direct 737-700 purchase from the American producer. The newly introduced unit is the first of a 14 aircraft order (and commitments) from Ruili, which currently operates two 737-700s and one 737-800 on seven domestic airport pairs. Commenting on the achievement, Ma Zhanwei, President, Ruili, said: “This is a momentous step forward for Ruili as we continue to enhance our fleet. We hope that the competitive advantages offered by the 737 will enable us to grow from a start-up airline to a driving force in China’s aviation industry.”

Following 111 airframes handed over in October, both Airbus and Boeing stepped up their deliveries in November this year, improving on last year’s results by nine units. While Boeing continues to lead the 2014 delivery race by 92 units (down from 96 in October), Airbus managed to deliver more units than its American counterpart for the second time this year. When compared to the first 11 months of 2013, the two producers managed to increase their combined deliveries by 57 units, with 1,200 aircraft incorporated by carriers into their respective fleets so far in 2014.

The combined deliveries of both manufacturers for the 11th month of the year, was 118, of which 61 came from the European producer, and 57 from its American counterpart, making it the best November since anna.aero started tracking aircraft deliveries in 2008. Notably, Airbus enhanced its performance when compared to the same month last year, delivering three more units, while Boeing handed over six fewer airframes. All in all, 75% of all November deliveries were single-aisle aircraft, which is up 2% from last month’s figure. 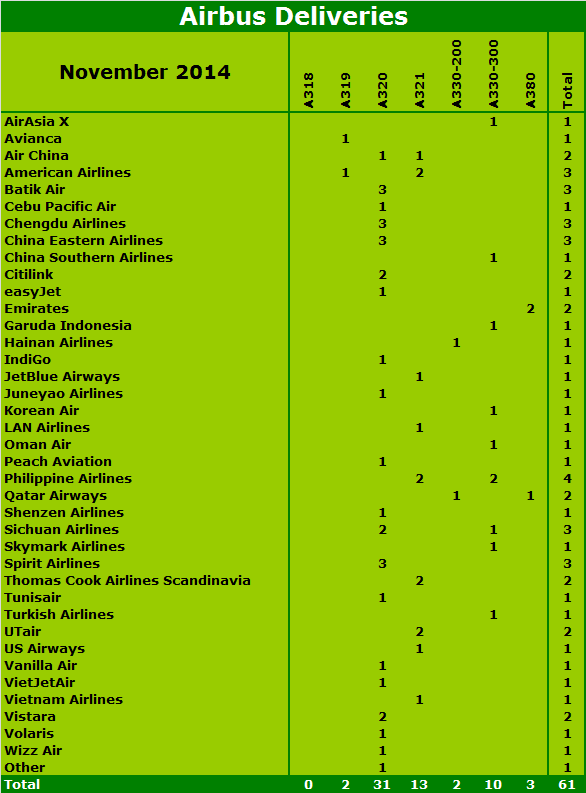 Airbus ended November with a total of 61 units handed over to airlines, which constitutes 11 more airframes than the amount delivered in October 2014 and three more than in the corresponding month last year. Over the 11 completed months of 2014, the European producer delivered 554 units, representing a decrease of 1.4% (eight fewer units) on the same period of 2013.

Once again, single-aisle deliveries in November were led by the A320 (31 units) with 46 narrow-body aircraft provided to carriers around the world. The oneworld member, American Airlines, was one of five airlines to receive more than two narrow-body units from Airbus, as it incorporated two A321s and one A319 into its fleet. Apart from this, other noteworthy carriers to receive more than two units were Batik Air, Chengdu Airlines, China Eastern Airlines and Spirit Airlines (each with three A320s); while seven other carriers saw two Airbus narrow-bodies join their respective fleets in November – Air China, Citilink, Philippine Airlines, Sichuan Airlines, Thomas Cook Airlines Scandinavia, UTair as well as Vistara.

Looking at wide-body deliveries, Airbus handed over 15 airframes in November, accounting for seven more units than in the preceding month, and two more than in the corresponding month of 2013. Following October’s delivery of a single A380, the European producer handed over three units of the type in the 11th month of 2014, two to the largest operator of A380s — Emirates, and one to Qatar Airways. As a matter of fact, Airbus‘ CFO has announced recently the possibility of stopping A380 production, with its fate being decided by 2018. At the moment, Airbus is considering two possible alternatives: either the A380 will be equipped with more efficient engines or it will be simply removed from production. As of November 2014, 318 Airbus A380s have been ordered, which is only a quarter of the expected demand. A total of 10 A330-300s were delivered in November, out of which two units of the type were incorporated by Philippine Airlines. Chengdu Airlines took delivery of its fifth new aircraft this year, when an unpainted A320 touched down at Chengdu Airport on 26 November. This also represents the third new aircraft handed over to Chengdu in the 11th month of 2014. 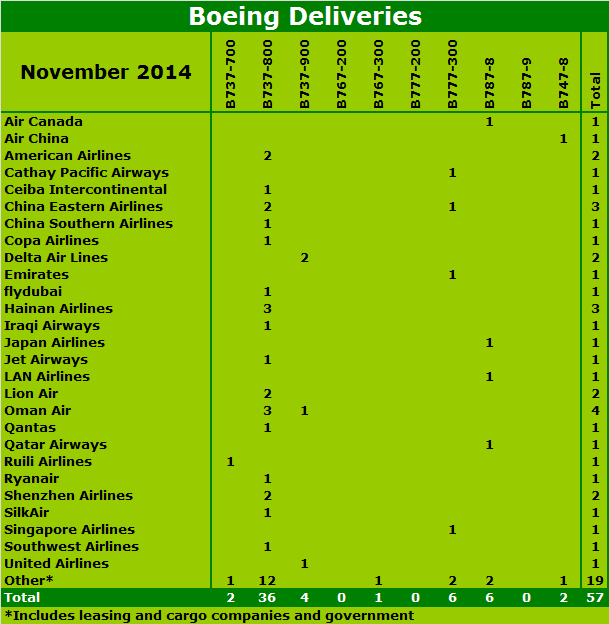 Carriers incorporated a total of 42 single-aisle units from the American producer, three more than in the preceding month. The flag carrier of Oman – Oman Air, which is based at Muscat Airport – was the largest recipient of the 737 family in November, as it incorporated three 737-700s and one 737-800 into its fleet. Ranking second in terms of single-aisle deliveries, Hainan Airlines (the fourth largest airline in terms of fleet size in China) took delivery of three 737-800s. In addition, five other operators received more than one single-aisle unit from Boeing, namely Delta Air Lines with two 737-900s as well as American, China Eastern, Lion Air and Shenzhen Airlines, each with two 737-800s. Notably, Ruili Airlines took delivery of its first direct 737-700 purchase.

A total of 15 wide-body airframes were delivered by Boeing in November 2014, seven fewer than the amount recorded in October. Besides this, the American manufacturer worsened its year-on-year performance, delivering one fewer wide-body unit than the 16 it managed in the corresponding month of 2013. Following seven and eight 787-8s delivered to carriers in September and October respectively, Boeing handed over a total of six units of the type reaching customers in the penultimate month of 2014, including one each to Air Canada, Japan Airlines, LAN Airlines and Qatar Airways. Interestingly, no 787-9 units were delivered by Boeing in November.