Tenerife South base for Iberia Express 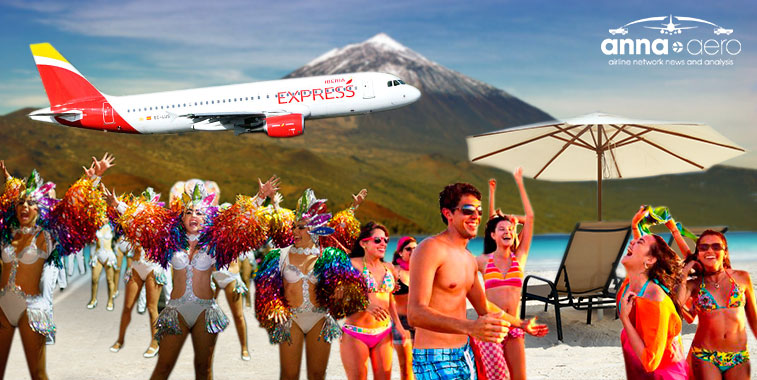 Party time in Tenerife (South). After using exhaustive market criteria to determine the best airport in the Balearics or Canaries for Iberia Express’ next home (after its initial Madrid operation), anna.aero’s data elves think a three aircraft base would be best suited at Tenerife South. No need to do the study anymore Fernando (the airline’s CEO) ‒ we’ve done it for you.

Iberia Express (I2), the low-cost daughter company of Iberia (IB), wants to establish a second base outside of its current Madrid hub, either next year or in 2016, most likely in Tenerife South. The airline’s CEO, Fernando Candela, intimated as much in a Spanish magazine interview recently that the second base will be in either the Balearic or the Canary Islands. IAG originally set-up Iberia Express in 2012 to operate short- and medium-haul routes from its Madrid hub and to provide transfer feed onto the mainline carrier’s long-haul network. Therefore, any move away from the principle hub will mean that the carrier will have to solely focus on point-to-point traffic, as Iberia’s long-haul routes are entirely served from Madrid.

Apparently the exact location of the base will only be decided once the airline has completed its own due diligence, but here at anna.aero we don’t normally like to wait around to be told where the new hub is going to be, we like to undertake our own bit of armchair airline CEO analysis. There are 11 commercial airports on the Balearics (Ibiza, Menorca and Palma de Mallorca) and the Canary Islands (Lanzarote, Fuerteventura, La Gomera, Gran Canaria, La Palma, Tenerife North, Tenerife South and El Hierro). These airports vary hugely in size, from the 23 million annual passenger handling Palma de Mallorca in the Balearics to the less significant La Gomera Airport in the Canaries, which handled around 24,000 passengers in 2013.

Iberia #1 airline at one airport – during the winter only

The following tables have been used to determine the best location for the new base, which has been derived primarily on the ‘avoid competing with parent company’ scenario, combined with the ‘low-hanging fruit’ scenario commonly employed by in-house LCCs. As many of the 11 airports being evaluated cater for highly-seasonal markets, the state of play in both the S14 and W14/15 seasons have been appraised. It should be noted that only data from scheduled flights has been used in the analysis, although many of these airports have huge charter airline flying programmes.

Looking at S14 operations first, what is immediately apparent is that Iberia has minimal presence across these airports, despite being Spain’s national carrier. At the bigger airports the existing market is commanded by the likes of Vueling and Ryanair, with Binter Canarias leading at the smaller airports in the Canaries. Iberia’s highest rankings (third) in terms of weekly seats are found in Gran Canaria and La Palma, while its largest S14 market share (14%) was found at Tenerife North. Iberia Express is present in eight out of 11 of the airports, with domestic flights from Madrid making up the vast majority of these services.

In terms of satisfying the first criteria for base selection ‒ ‘avoid competing with parent company’ – given the lack of Iberia presence at any of the 11 airports, an Iberia Express base could easily be set-up at any of them without too much upset. However, a positive decision is needed for Mr Candela, so we have to start removing some of the options for him. Assuming that Iberia Express will want to make a significant ‘market splash’, anna.aero’s data elves have deemed a three aircraft base is a minimal entry requirement. Configured with 177 seats, the airline’s A320s have been assumed to offer at least 17 weekly sectors (based on the airline operating 18 sectors per aircraft in S14 and 15 in W14/15), which equates to 9,027 weekly seats. While making a significant splash is absolutely necessary, the market size needs to be able to sustain such a capacity influx. On this basis, airports where the planned market share of the new base arrival exceeds 20% of total weekly seats in S14 have been excluded – this knocks out La Gomera, El Hierro and La Palma in the Canaries. Using this criteria also helps with the application of the ‘low hanging fruit’ scenario, as the airline will be keen to not wholly rely on stimulating a small market that is unable to sustain the fresh capacity.

Down to the final four – ACE, LPA, PMI and TFS

Turning our attention to W14/15, the same potential airport culling criteria – less than 20% of total weekly seats – is applied to the remaining eight airports, allowing us to remove a further four airports from the list of probable bases – Ibiza, Menorca, Fuerteventura and Tenerife North. In many ways this measure is more crucial in the winter season, as the extreme seasonality of some of these markets makes the importance of having a balanced year-round traffic profile more necessary.

Indeed, the final decision of the base location uses the airport’s seasonality as the ultimate deciding factor. Comparing the two sets of weekly seats data (S14 vs W14/15) for the remaining four airports sees Palma de Mallorca’s far more extreme seasonality deliver the worst set of figures, with its summer seats being four times larger than its winter offering. The flattest traffic profile comes from Tenerife South, with little or no variance between the summer and winter – in fact the Canaries airport has more winter seats than summer ones in the two sample weeks analysed. As a result, the second biggest airport in the Canaries sees off competition from Lanzarote and Gran Canaria (the biggest airport in the Canaries) to become anna.aero’s data elves’ favourite choice for an Iberia Express base.

Selecting any one of these Canary Islands bases will see Iberia Express have to face fierce competition from ULCC Ryanair, which has bases on all three islands. As a result, the Spanish carrier may choose to go head-to-head against a slightly weaker competitor in the form of airberlin, which has its well-established operation in Palma de Mallorca.

Where to fly? France, Germany, Scandinavia, UK and domestic…

With the potential base now selected, the next job for Iberia Express is to try and determine where it should fly to from Tenerife South. According to the airline’s CEO, he says that the carrier is looking to strengthen its presence in the Spanish domestic market as well as in France, Germany, and Scandinavia. New flights to the UK are also being studied. This strategy is backed up to some extent by the recent joint press release from Iberia and Iberia Express, launching 13 new routes next summer from Madrid to Germany (Hamburg), UK (Edinburgh, London Gatwick, Manchester) and France (Paris CDG) – but also to Italy (Catania, Florence, Naples, Palermo, Verona), as well as to Budapest and Funchal, and Asturias to Tenerife.

The four target markets have been evaluated in terms of the biggest (in terms of W14/15 weekly seats) served opportunities, as well as the largest unserved markets in each country/region (in terms of annual passengers) from Tenerife South. It should be noted that Madrid is already served by Iberia Express. Many of the unserved opportunities may well be without service due to operational reasons like access to slots or runway length. In fact in the UK, our data elves were running out of options, and this may well be why the airport pairs are unserved.

Several of these potential routes from Tenerife South would see Iberia Express compete directly with Ryanair, either on exact airport pairs (like to Paris Beauvais) or on city pairs (to Memmingen for Munich). The Irish ULCC also offers services to Manchester, East Midlands, Barcelona, Billund and Santiago de Compostela. 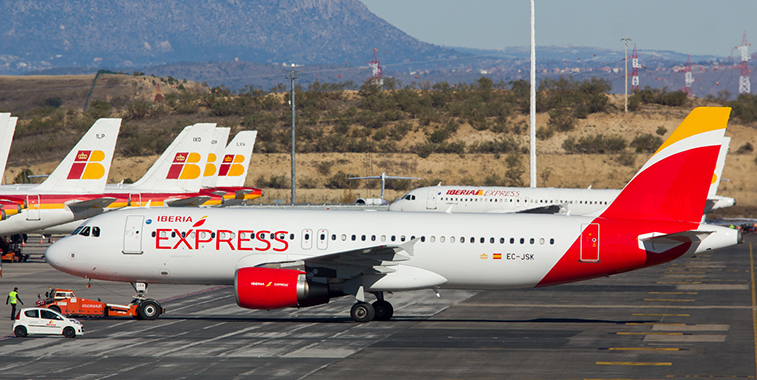 Iberia Express is set to become a more regular sight at Paris CDG, Düsseldorf, Helsinki, London Gatwick and Gran Canaria with new routes from its new Tenerife South base.