Oman Air, which controls 58% and 62% of seats and flights in Oman, expanded its international network with a new destination on 2 December, when it commenced thrice-weekly flights on the 6,632-kilometre sector from its Muscat base to Manila in the Philippines.

Oman, officially known as the Sultanate of Oman, is situated south of the United Arab Emirates, holding a strategically important position at the mouth of the Persian Gulf. The country is home to an estimated population of four million, even though it covers an area of almost the size of Poland. Unlike its resource-rich neighbours, Oman has modest oil reserves, being classified at #25 position worldwide in this sector. While its reserves of petroleum total about 5.5 billion barrels, its natural gas reserves are estimated at 850 billion cubic meters, ranking 28th globally. Considering around half of the population is concentrated in the capital city of Muscat, there is no surprise that Muscat Airport (also called Seeb International Airport) commands 91% of weekly seat capacity in this country market. Nevertheless, according to Innovata schedule data for this December, Oman currently offers four commercial airports providing scheduled airline services, namely Salalah, Khasab and Sohar, with the last two being relatively small.

Examination of annual traffic facilitated by Oman Airports Management Company (OAMC) reveals that the two major Omani airports handled a combined total of over nine million passengers in 2013, representing a double-digit increase of 11% when compared to 2012 figures. In fact, both airports managed to post a double-digit increase last year, with Salalah (+19%) outperforming Muscat (+10%). 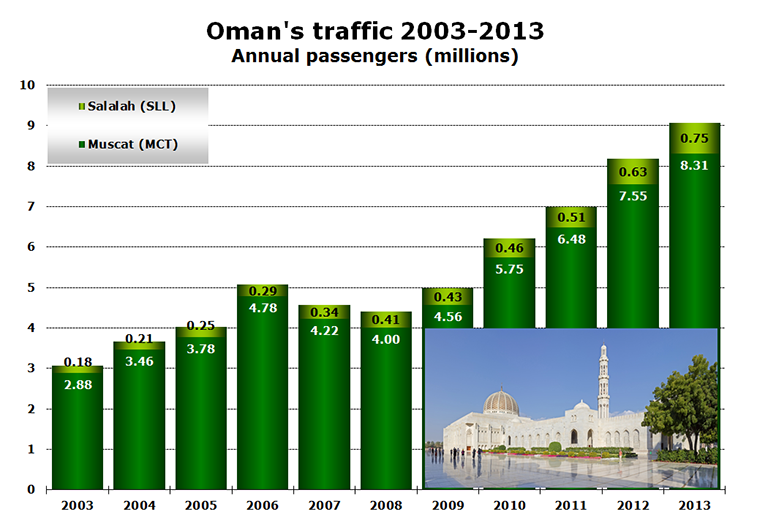 Looking at traffic development between 2003 and 2013, the combined passengers of Muscat and Salalah airports increased with an average annual growth rate (CAGR) of 10.3%. Omani airports handled a new record high of around nine million passengers last year, a number that increased dramatically from the three million recorded 11 years ago. Overall, Oman saw growth since 2003, with the exception of 2007 and 2008 when declines of 10% and 3.3% respectively were noted. The traffic fall can be explained by the decision of Oman to withdraw from its ownership of Gulf Air in May 2007. As a result, Gulf Air withdrew services from Oman to focus on its Bahrain base, while Oman Air entered a period of rapid growth.

Oman Air controls 58% and 62% of seats and flights

As of December 2014, Oman is served by a total of 27 airlines, with the national carrier Oman Air being the dominant player in this country market, as it controls 58% and 62% of seats and flights respectively. The airline, which can trace its roots back to 1970, operates a total of 45 airport pairs, of which 42 are international routes. That said, Dubai is Oman Air’s most frequently served international destination with a combined 53 weekly flights from Muscat and Salalah. In fact, the carrier has expanded its international network with Manila on 2 December, when it commenced thrice-weekly A330-200 flights from its Muscat base. By comparison, the Omani domestic market has long been a virtual monopoly for Oman Air, which connects Muscat to Salalah, Khasab as well as Sohar. 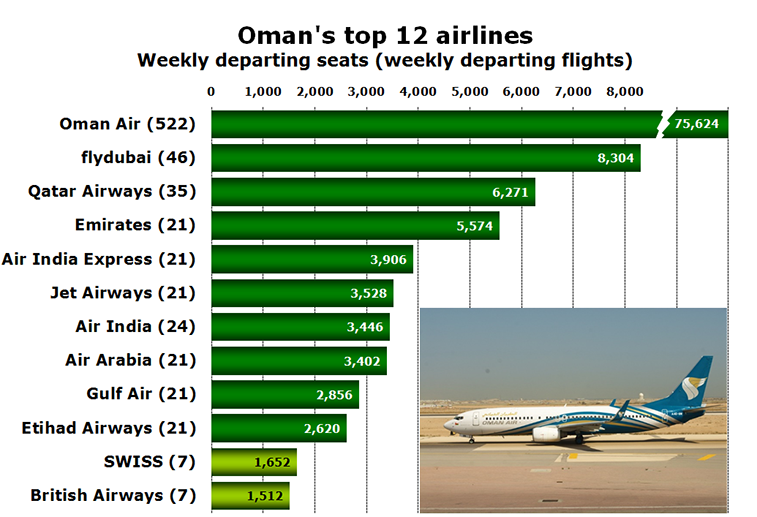 Total weekly seat capacity in Oman has gone up 8.2%, with only British Airways recording capacity decline of the top dozen airlines, when comparing data from this December with the same week last year, while Air India and SWISS saw their operations unchanged. The oneworld member, which operates to Muscat daily via Abu Dhabi, has noted 4.4% capacity decline due to replacing its 226-seat 777 flights with 216-seat 777 services over the past 12 months. SWISS is the second European operator that is featured in this year’s ranking, as it serves Muscat daily from Zurich via Dubai. Other European operators that fly to this country market are KLM (five times weekly) from Amsterdam via Doha, as well as Turkish Airlines that operates thrice-weekly with direct flights from Istanbul Atatürk and four times weekly via Bahrain.

flydubai is the fastest growing operator, increasing its weekly capacity by 42% or 2,445 weekly seats due to expanding its frequency on the 349-kilometre sector from Dubai to Muscat from four times daily to 41 times weekly, as well as growing the frequency on the Dubai-Salalah airport pair from thrice-weekly to five times weekly.

Based on Innovata schedule data for this December, operations to the UAE noted 17% growth when compared to data from the same week last year, overtaking India and becoming the largest country market with a capacity share of 24%. While Emirates, flydubai and Air Arabia enhanced their operations between the UAE and Oman over the last 12 months, Rotana Jet commenced four weekly flights from its Abu Dhabi Al Bateen base to both Muscat and Salalah at the beginning of this year. Even though weekly capacity to India increased by a modest 2%, the country market is not far behind the first position, with Jet Airways, Air India, IndiGo, SpiceJet, Air India Express and Oman Air operating a combined 174 weekly flights. 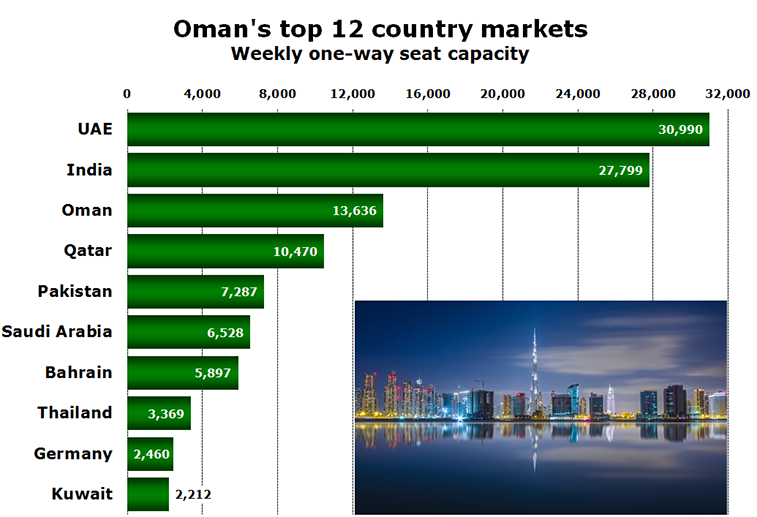 While Kuwait is the fastest growing country market (+21%), being followed by Malaysia with an increase of 19% and the UAE with 17%; Sri Lanka has witnessed the most significant decrease (-17% or 451 fewer seats), as a result of SriLankan Airlines having reduced its frequency on the 2,937-kilometre airport pair from Muscat to Colombo, from daily to four times weekly.