New York JFK’s latest route launch is the 3,187-kilometre sector to Curaçao, the island in the southern Caribbean Sea part of the Kingdom of the Netherlands, which was inaugurated on 2 December by JetBlue Airways with twice-weekly flights.

As a result of a 2.3% increase in passenger numbers last year when compared to 2012 figures, JFK established itself as the sixth busiest gateway in the US, while Newark was classified as 13th (+3.1%) and LaGuardia was ranked #20 (+4.4%), according to anna.aero’s American Airport Traffic Trends database. In addition, the airport is classified as #19 in the 2013 global rankings, after being overtaken by Guangzhou and Istanbul Atatürk. The busiest gateway to New York, JFK (more commonly known as Idlewild Airport until 1963) is under the operational control of The Port Authority of NY and NJ (PANYNJ), and serves as a base for JetBlue Airways, American Airlines and Delta Air Lines. In the past, the airport has been a hub for Eastern Air Lines, National Airlines, Pan Am and Trans World Airlines. 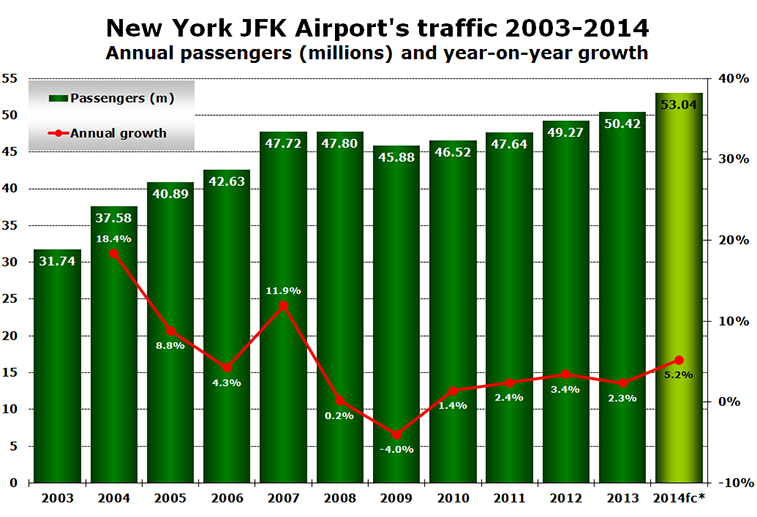 Analysis of data facilitated by PANYNJ reveals that passenger traffic at New York JFK has grown continuously between 2003 and 2013, with the exception of 2009, when a decrease of 4% was noted due to the global economic recession. In fact, its passenger numbers increased with an annual growth rate (measured in CAGR) of 4.3% over the 2003-2013 timeframe. JFK handled close to 32 million passengers in 2003, a number that grew to a record 50 million last year. Traffic at LaGuardia also reached a new high – close to 27 million – while Newark with 35 million was still behind the 36 million record achieved in 2007. In the first nine months of 2014, for which traffic data is already available, JFK posted an increase of 5.2% when compared to the corresponding period of 2013, with 41 million passengers handled until end-September. If the airport continues on its existing 2014 growth trajectory, anna.aero forecasts that it will achieve over 53 million passengers this year.

Furthermore, entering JFK’s monthly passenger data for 2013 into anna.aero’s Seasonal Variation in Demand (SVID) calculator, the airport performs exceptionally well, producing a score of 1.74, an “excellent rating”. Against its fellow airport peers from the New York area, its 2013 score is marginally higher than the second busiest airport at Newark (1.15 – excellent). Besides this, when compared to LaGuardia, it performs worse than the 27 million facility, which scores 0.98, another “excellent” result. All in all, with almost 80 seasonality performance evaluations completed so far this year, JFK has entered the rankings at #29 spot, between Long Beach (1.66) and Oslo Gardermoen (1.60).

JetBlue dominates with 25% and 29% of seats and flights

While a total of 68 airlines operate from JFK, the top 12 carriers command around 77% of weekly seats this December. Due to increasing its weekly capacity by 6.8% over the last 12 months, JetBlue managed to maintain its top position in 2014. The airline only began operations from JFK as recently as February 2000, and yet by 2003 it had overtaken American to become the biggest airline at the airport. Furthermore, the LCC, which controls 25% and 29% of all weekly seats and flights respectively, operates to a total of 62 airport pairs from JFK, of which its third busiest base at Fort Lauderdale is the most frequently flown destination, served with 78 weekly flights. Internationally, the LCC’s JFK offering consists of 22 routes to 16 country markets in the Americas and the Caribbean. In fact, on 2 December, JetBlue has added Curaçao in the southern Caribbean Sea to its international offering from JFK, with twice-weekly flights. Not far behind, with a weekly seat share of 24%, Delta connects JFK to 90 worldwide destinations with a combined total of 1,159 weekly departures. Overall, the first three biggest operators at JFK, command over 61% of weekly capacity at the airport. 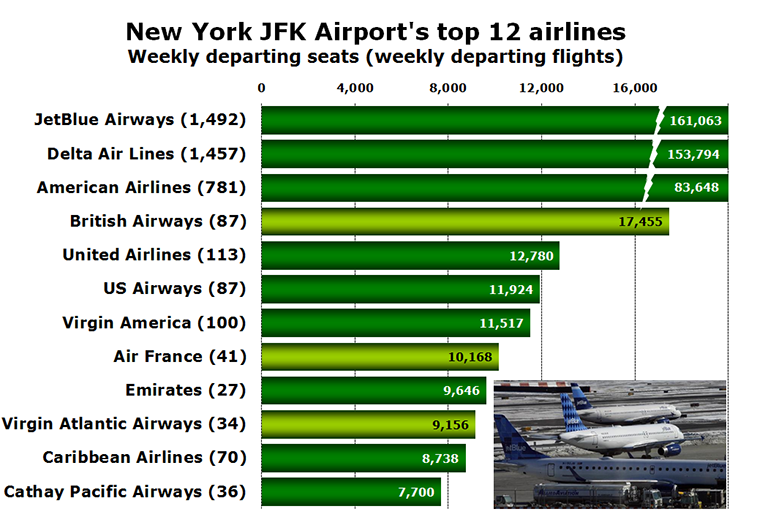 Weekly seat capacity for this December has gone up 5.4% (when compared to the same week last year), with seven of the top dozen operators recording capacity growth, while Emirates and Cathay Pacific Airways saw their operations unchanged. Delta is the fastest growing carrier at JFK, posting a net annual growth in weekly capacity of 15,661 weekly seats or 11% more when compared to the corresponding period last year, coming as a result of adding operations to 14 new destinations, but withdrawing services to a total of four. By comparison, American has provided the greatest capacity decrease (-7.6%), followed by United Airlines (-6.9%) and then Caribbean Airlines (-4.1%). As a major international gateway, it is worth noting that three of the top dozen airlines (highlighted in bright green) are from Europe, led by British Airways, which operates a combined total of 71 weekly departures to London City, London Heathrow and Paris Orly, the latter route being flown by its OpenSkies brand.