Romania’s Blue Air reached a significant milestone on Saturday 13 December when it celebrated 10 years of operations. The LCC, which launched in the year when Romania joined the EU, has (according to the airline’s in-flight magazine beBlueAir) carried some 11.5 million passengers during its first decade, and currently operates a fleet of 11 Boeing 737s (-300s, -400s and -500s). Having originally started operations from Bucharest’s ‘low-cost’ airport at Baneasa, the carrier was forced to relocate to the city’s main Otopeni airport in the summer of 2012 when Baneasa was closed for scheduled services. In addition, the airline saw a change of ownership in the summer of 2013 with a local company Airline Management Solutions taking control.

This summer Blue Air operated 35 scheduled routes of which 22 were from Bucharest and a further 10 from its secondary base at Bacau. A number of new, seasonal services were added to holiday destinations in Greece and Turkey, as well as resuming flights between Bucharest and Cologne Bonn and Bucharest and Cuneo. According to anna.aero’s data archives, at one time or other during the last 10 years Blue Air has served 45 destinations from Bucharest with scheduled services. Routes no longer served by the airline from the Romanian capital include Florence, Istanbul, Lisbon, Lyon, Venice, Verona and Vienna. In addition the airline has swopped airports at a number of destinations such as Berlin (Schönefeld to Tegel), Brussels (Charleroi to Zaventem) and London (Stansted to Luton). 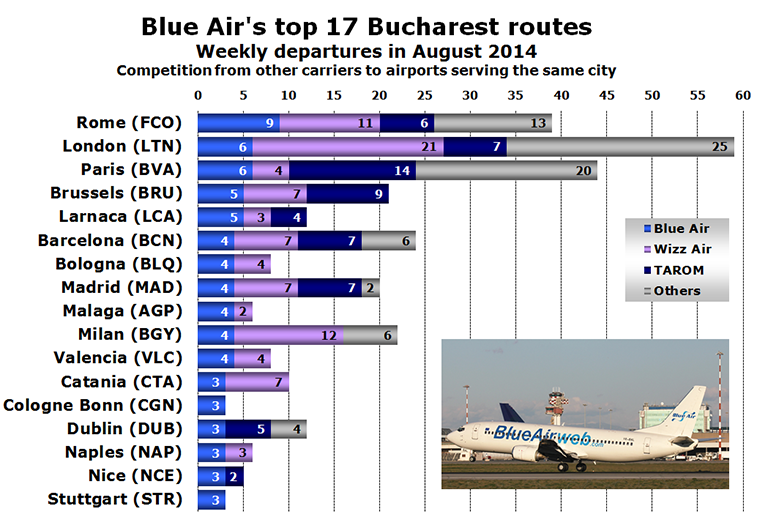 This summer Blue Air operated to 17 destinations from Bucharest with at least three weekly flights. Only Rome Fiumicino was served at least daily with London Luton and Paris Beauvais having six weekly flights. Wizz Air competes either directly (on the same airport pair) or indirectly (to another airport serving the same city) on 13 of these 17 routes, while flag-carrier TAROM offers an alternative option on nine of them. Only on the two German routes to Cologne Bonn and Stuttgart does Blue Air not face any competition. 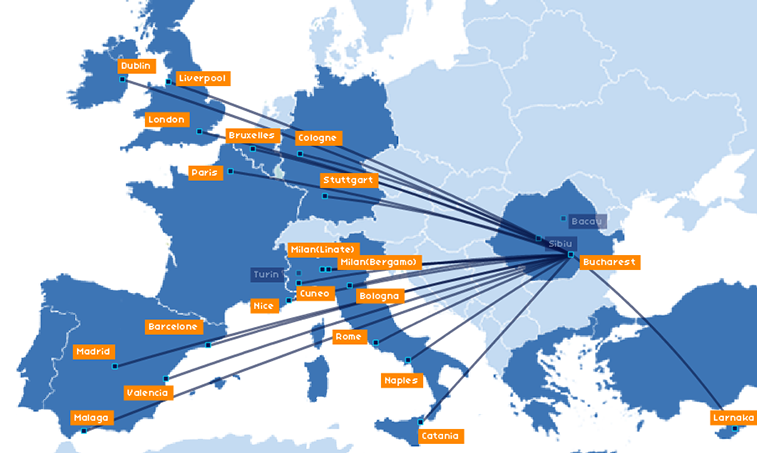 Second base at Bacau

According to the airline it will operate non-stop flights from Bacau to nine destinations next summer. Existing routes to Bologna, Brussels, Dublin, London (Luton), Milan (Bergamo), Paris (Beauvais), Rome (Fiumicino) and Turin (Cuneo) will be continued and joined by a new service to Liverpool starting in March. All of these routes will be served at least twice-weekly, with Rome getting daily flights.

Other routes currently planned for next summer are Sibiu-Stuttgart (thrice-weekly) and Turin-Catania (six times weekly). The Sibiu-Stuttgart route serves workers in the automotive industry as Sibiu is home to a number of component manufacturers, while Stuttgart is home to both Mercedes and Porsche. The reasons for recently launching six times weekly flights between Turin and Catania are less clear, as the route is already served daily by Ryanair. However, it may be related to the fact that this winter Blue Air is operating two routes from Turin on behalf of Meridiana; four times weekly flights to Naples, and twice-weekly flights to Berlin.

According to anna.aero’s archives Blue Air has not been shy in exploring the viability of a wide range of other routes outside of its main Bucharest base. These include: 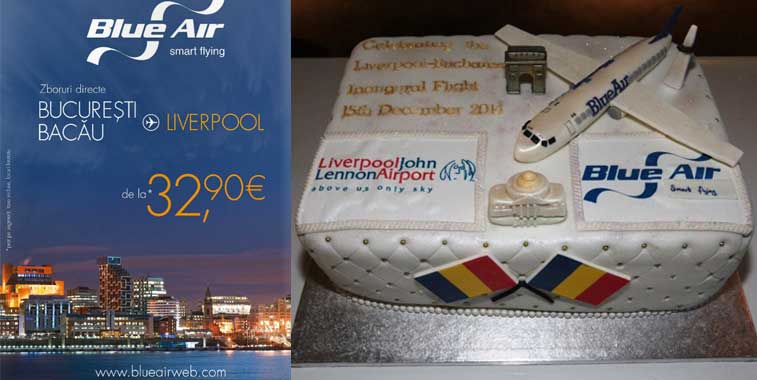 Blue Air’s latest network addition is Liverpool. Thrice-weekly flights from Bucharest began on 15 December 2014, while service to Bacau is expected to begin in March 2015.