International services were welcomed back in style to Reno-Tahoe International Airport when Volaris introduced twice-weekly flights from Guadalajara in mid-December. A cake and a water arch salute were part of the celebrations. Even more exciting for the airport will be the launch in December 2015 of the airport’s first European service, when Thomas Cook Airlines introduces twice-weekly flights from London Gatwick.

Reno-Tahoe International Airport in Nevada celebrated a major milestone just before Christmas with the arrival of a flight from Guadalajara Airport in Mexico. The service, operated twice-weekly by Volaris, was the airport’s first scheduled international service for 15 years. Reno is the second largest city in the state of Nevada with a population of around a quarter million and is famous for its casinos. It promotes itself as “The Biggest Little City In The World”. Lake Tahoe, which straddles the Nevada/California border and lies around 40 kilometres south-west of Reno, is the largest alpine lake in North America and is a major tourist attraction, being home to several ski resorts. The 1960 winter Olympics, the first to be televised live, were held nearby at Squaw Valley. 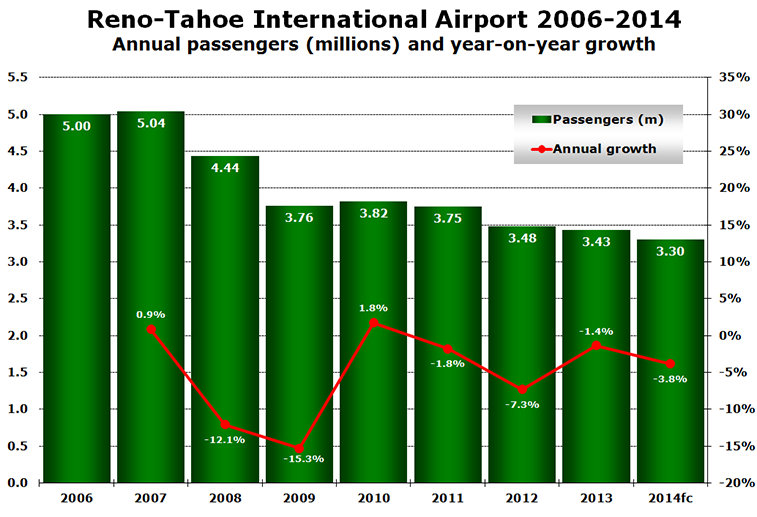 In recent years passenger numbers at Reno-Tahoe International Airport have been in decline. In 2007, over five million passengers passed through the airport, but since then demand has fallen by around one-third. Comparing schedule data for January 2015 and January 2007 shows that the airport has lost non-stop services to Atlanta, Boise, Oakland and Santa Ana, while capacity has been reigned in considerably on several other routes.

Thanks to the region’s year-round tourism Reno’s seasonality profile is relatively flat and scores a “Good” 2.59 on anna.aero’s SVID calculation based on 2013 data. However, Las Vegas scores an even better 0.57 (“Excellent”) while nearby Sacramento in California also rates as “Excellent” with a score of 0.77. 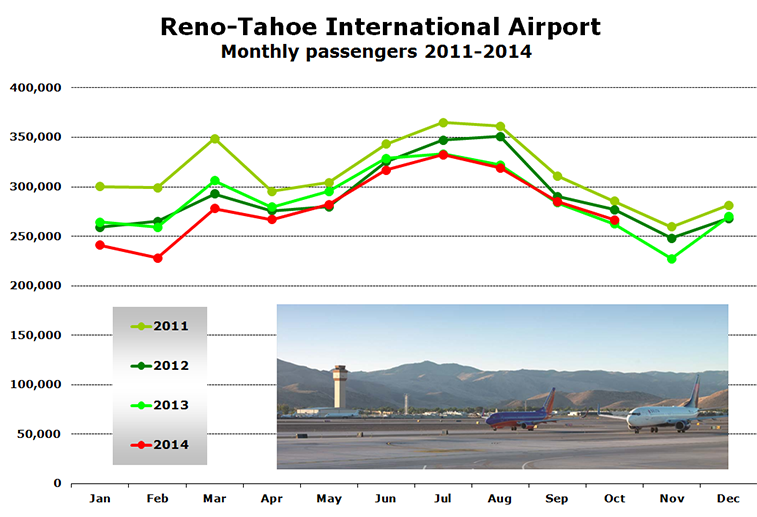 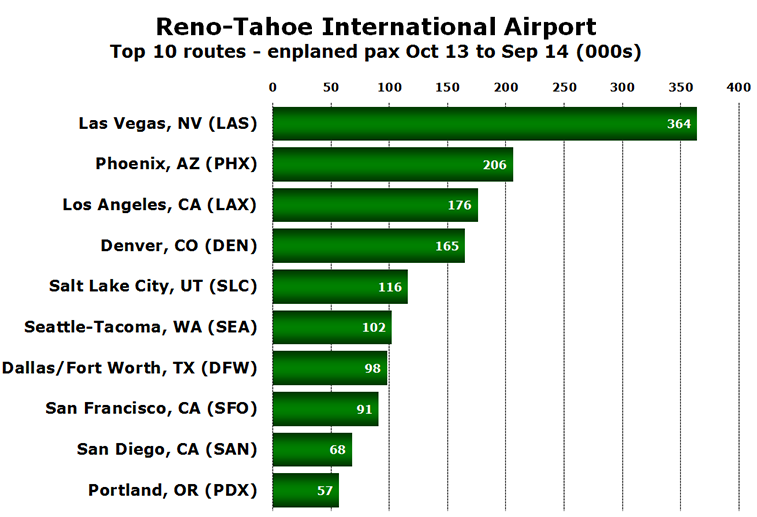 Southwest #1 with almost 50% of seat capacity

Transatlantic service from London set to start in December

In early November it was announced that Thomas Cook Airlines, in conjunction with Ski Lake Tahoe, would introduce a twice-weekly A330 service from London Gatwick to Reno-Tahoe from 19 December 2015 until 9 April 2016. This is the first ever non-stop scheduled service between Reno-Tahoe and Europe. “This is amazing news for our ski community, gaming community and overall economic impact for the region,” said Airport President and CEO Marily Mora. “It also highlights that Reno-Tahoe International Airport is truly the Gateway to Lake Tahoe. Non-stop service to London, England represents an important partnership between the skiing and gaming community in Reno-Tahoe. Our ski resorts and hotel casinos have partnered to support this flight and bring our new European customers a one-of-a-kind skiing and nightlife experience in one of the most beautiful and entertaining places on earth.” Reno-Tahoe International Airport will get its first European service starting December 2015 when Thomas Cook Airlines will start twice-weekly flights. Announcing the new route at the airport on 4 November was airport CEO Marily Mora. Tea and crumpets were served to celebrate the news.