anna.aero’s New Route Database has details of over 1,000 new services by 160 airlines set to start in 2015 – over 100 more routes than this time last year. While the USA was overwhelming the most active new-route country market in 2014 (China was just 7th), one of the promised highlights of 2015 includes easyJet’s 26th base at Amsterdam Schiphol… and can it be really true that Emirates has no route launches planned?! (We’re grateful to Kim Jong-Un, a reader in Pyongyang, who laid on this Arirang Festival just so we could illustrate our point.)

According to anna.aero’s New Route Database, 352 of the world’s airlines launched over 2,550 new services across 171 countries in 2014, which works out as an average of almost 50 new services per week. This is over 150 more new routes than we logged in 2013. Around 1,150 of these new services were on routes already operated by at least one other carrier, while over 1,400 were genuinely new routes. The average frequency of the services launched where there was competition, was 5.8 flights per week (up from 5.5 in 2013), while on the genuinely new routes the average weekly frequency was just 3.9 (up from 3.6 in 2013).

Despite starting over 40 fewer routes in 2014 than in 2013, Ryanair still launched more new routes than any other airline in the world in 2014. With 134 new routes launched, Ryanair beat its nearest rival germanwings by some 50 routes, a much narrower gap than last year when the margin of victory was almost 100 routes, although in fairness germanwings owes its second position to being handed many former Lufthansa routes. 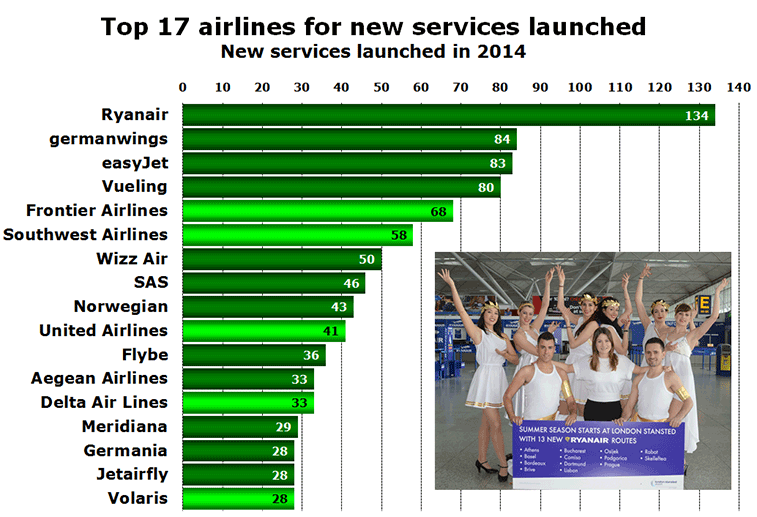 European carriers (in dark green) took nine of the top 12 places despite low economic growth in the region. Putting germanwings aside, easyJet and the Alitalia-attacking Vueling both achieved their rankings through organic growth. In the battle for Scandinavia, it may come as a surprise to see that SAS started more new routes than local rival Norwegian, while Aegean Airlines of Greece continued to impress in the recovering Greek market. Among Europe’s niche airlines Germania (Germany), Jetairfly (Belgium) and Meridiana (Italy) all had busy years. The only non-European carriers in the top 17 were either from the US (four carriers) or Mexico (Volaris).

The 2,564 new services in our database involve 5,128 airports, one at each end of the route. Analysis by country reveals that despite relatively modest traffic growth, US airports still welcomed more than double the number of new services in 2014 than the airports of any other country. Europe’s five ‘FIGUS’ countries filled the next five positions, with Spain dropping from second in 2013 to fifth in 2014 as Germany, Italy and the United Kingdom each moved up a place. European countries (in dark green) scooped nine of the top 15 positions. Apart from the US the leading non-European countries were China (7th), Japan (10th), Mexico (11th), UAE (13th) and Canada (15th). 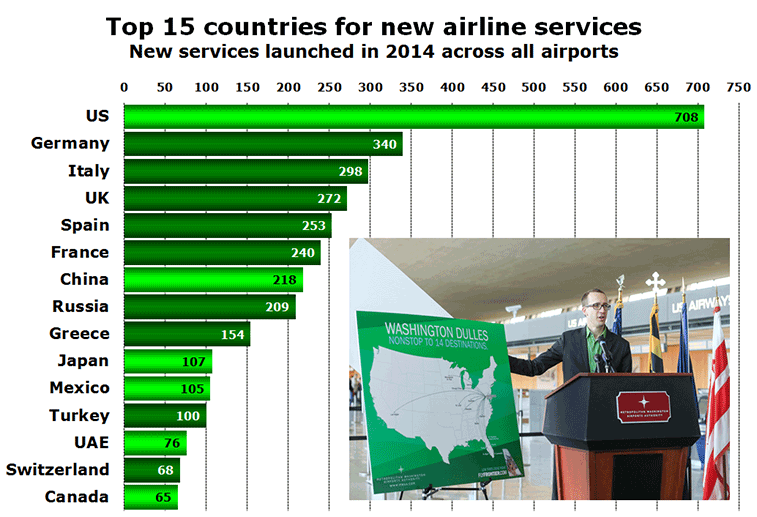 Just outside the top 15 were Poland, Thailand, Brazil, Indonesia, Malaysia, Belgium, Sweden, India, Portugal and South Korea. All of these countries saw at least 50 new air services launched from their airports.

In 2013 more new services were started with Boeing than with Airbus aircraft, but in 2014 this pattern was reversed with almost 1,000 routes started by airlines operating the aircraft produced by the European manufacturer, and just under 900 routes started by airlines operating aircraft produced by the US manufacturer. Among turboprop manufacturers ATR (with just under 90 new routes) beat Bombardier (just under 70 new routes).

As we start 2015, anna.aero’s New Route Database currently has details of over 1,000 new services that are scheduled to start before the end of the year. These are being flown by 160 airlines. This time last year the corresponding figures were 900 and 150 suggesting that 2015 is going to be a record year for airline route launches. Eight airlines, all based in Europe, have already indicated their intention to start over 30 new services this year with easyJet, Wizz Air, Aegean Airlines and Vueling leading the way.

Ryanair has so far announced plans to open three new bases in 2015; in Bratislava (Slovakia), Copenhagen (Denmark) and Ponta Delgada (Portugal). This will take it to 72 bases across Europe and North Africa. However, at present these three new bases will see the addition of just eight new routes between them.

easyJet will open its 26th base at Amsterdam Airport Schiphol at the start of the summer 2015 season. However, many of its other bases will see expansion this summer with the airline having already revealed plans for almost 70 new routes in 2015.

Among the flag-carriers, SWISS currently leads the way with expansion planned in Geneva and Zurich, perhaps to make up for its withdrawal from the Basel market at the end of May. Finnair plans to add almost 20 destinations this summer from Helsinki, while British Airways is adding almost 20 new routes split across London Heathrow, London Gatwick and London City airports. After a not always bloodless low cost revolution, a new Indian full service airline, Vistara, starts services this month. A joint venture between Singapore Airlines and the famous Tata conglomerate (which originally founded Air India in the 1930s), Vistara’s aircraft deliveries have been treated like route launches by Delhi airport operator GMR.

In the next week India’s newest airline, Vistara, is set to finally launch operations. This is the joint venture carrier between India’s Tata Sons and Singapore Airlines. With fuel prices at their lowest levels for several years this may be a good time to start a new airline. Other new carriers planning to take flight in 2015 include Jetlines (a ULCC to be based in Vancouver) and several new LCCs in China, where new airports continue to be opened to serve new markets.