Europe here we come! Cakes, ribbons and speeches were all part of the route launch celebrations as Air Canada and its subsidiary Air Canada rouge launched new services in June 2014 from Toronto Pearson Airport to Lisbon (Portugal), Manchester (UK) and Milan Malpensa (Italy). This has helped Canada’s busiest airport to grow its international (non-US) demand by 7.5% in the first 10 months of 2014. 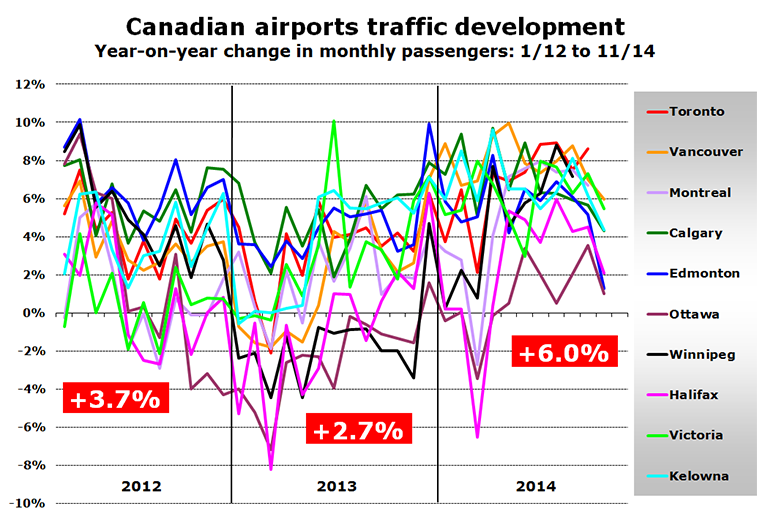 International (non-US) traffic up 15% in Edmonton thanks to Icelandair

The eight busiest Canadian airports all break down their traffic figures into domestic, transborder (US) and international (non-US). A graph of 2014 year-to-date ‘growth’ for each airport by region reveals that domestic traffic is up at all eight airports, with half of them achieving growth of more than 5%. In the transborder market six of the eight airports are reporting growth, led by Vancouver (+9.3%), Edmonton (+9.2%) and Toronto Pearson (+6.6%). 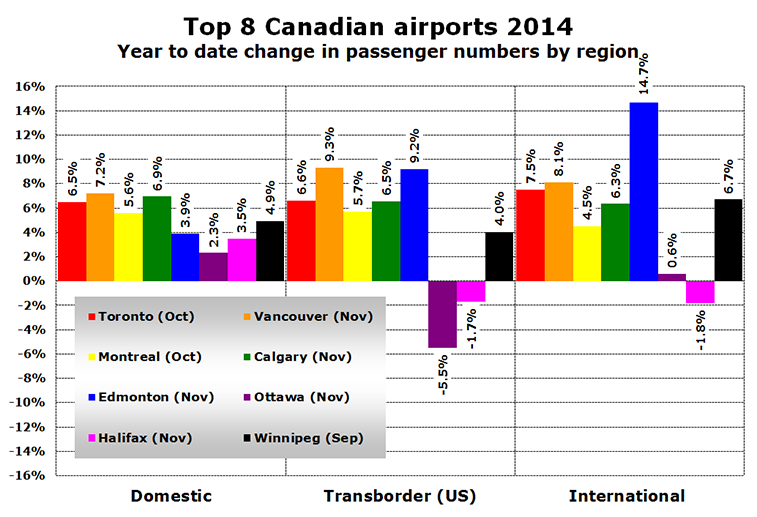 International (non-US) traffic is up at seven of the eight airports, with Edmonton reporting impressive double-digit growth of almost 15% in 2014 thanks in part to the launch of Icelandair’s Reykjavik/Keflavik service on 5 March 2014. The top five airports have all reported growth in all three market segments in 2014. Icelandair introduced non-stop flights from Reykjavik/Keflavik to Edmonton on 5 March 2014. This has helped the Canadian airport to report almost 15% growth in 2014 on non-US international routes.

The following new international (including US) services have been introduced during the current W14/15 season from Canada’s main airports:

The following new international services have been announced and are scheduled to start operations during S15:

In addition Air Canada has already announced plans to operate non-stop flights from Toronto to Delhi and Dubai starting in November 2015.