So called ‘logojets’ are still something of a rarity in the Chinese market but Beijing Capital Airlines has two A320s in non-standard colour schemes among its fleet of 52 Airbus narrowbody aircraft. With an estimated 2.5% share of the Chinese domestic market the Hainan Airlines Group subsidiary recently launched its first international flights to Japan (Okinawa and Shizuoka), South Korea (Cheongju) and Thailand (Bangkok and Phuket).

Beijing Capital Airlines (IATA code JD), the Chinese carrier in which Hainan Airlines Group (HNA) is the majority shareholder, has recently started operating its first international services. With a current fleet of 52 Airbus narrowbody aircraft (27 A319s and 25 A320s according to Airbus) the airline has an estimated 2.5% share of the Chinese domestic market. Much of its fleet is leased from Hainan Airlines, though its newest aircraft have been leased from BOC. 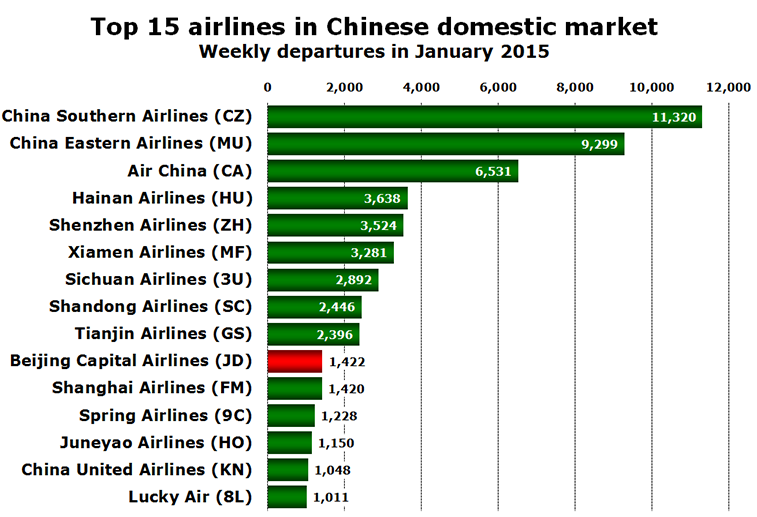 Over 100 routes operated with considerable churn in last 12 months

Based on analysis of schedule data, Beijing Capital Airlines has increased its scheduled route network from 104 routes to 111 in the last 12 months. However, this net gain of seven routes is achieved by the axing of 29 airport pairs and the launch (or resumption) of 36 airport pairs. Only five of these routes are served with at least two flights per day, with the airline’s Beijing-Hohhot service having the highest frequency with 20 weekly flights. 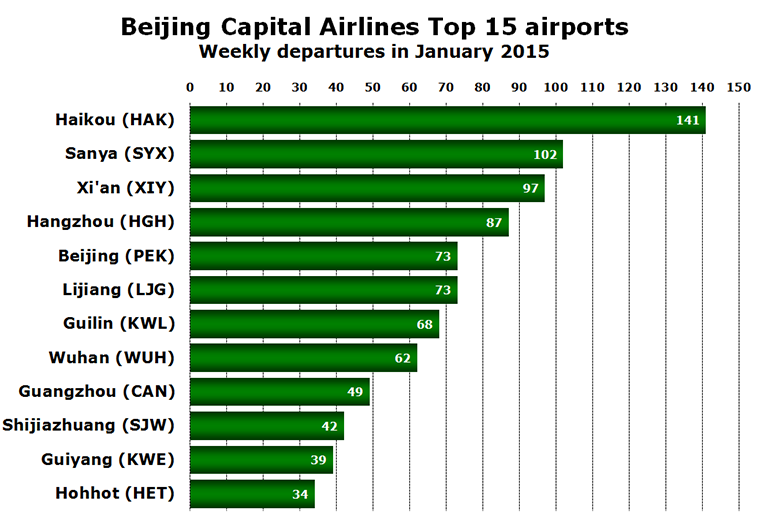 The two busiest airports of Haikou and Sanya are both located on Hainan Island off the southern Chinese coast, and are both witnessing over 100 weekly departures per week from Beijing Capital Airlines (which is known locally as just Capital Airlines). Beijing is only fifth equal among the airline’s airports with 73 weekly departures spread across 10 domestic routes and one international route.

Until the end of October 2014 the airline’s scheduled network comprised only domestic services. Since then, the airline has launched international service to five destinations in three different countries: