Located 13 kilometres southeast of the capital Chisinau – formerly known as Kishinev – Chisinau Airport is the main gateway to the Republic of Moldova, an Eastern European country bordered by Romania and Ukraine. A member of the Association of CIS airports, Chisinau was awarded best airport in the CIS for six consecutive years between 2007 and 2012. It also caters for a population of 493,000, and serves as an operating base for Air Moldova. In fact, the Moldavian flag carrier has inaugurated two new airport pairs, to Turin on 16 December and to Moscow Sheremetyevo on 22 December with twice-weekly and four times weekly flights respectively. In addition, Chisinau offers 30 non-stop services flown to 16 countries in Europe and the Middle East. 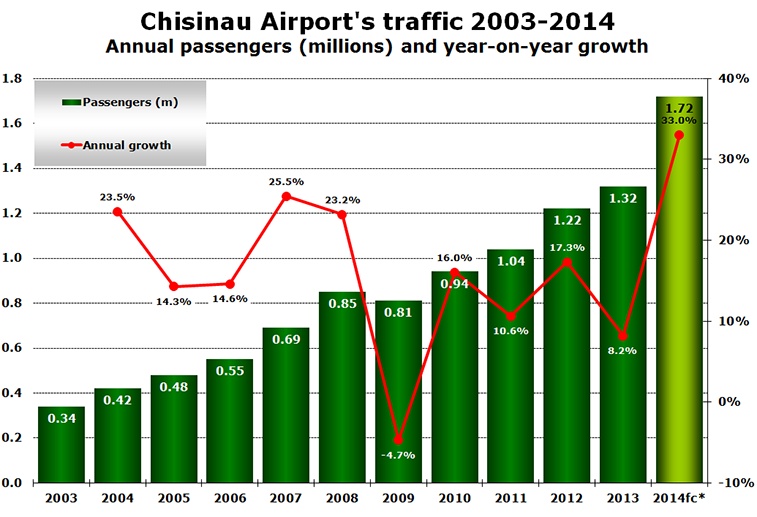 Examination of data facilitated by the Moldavian airport reveals that passenger traffic at Chisinau has grown impressively between 2003 and 2013, with an average annual growth rate (CAGR) of 13% over this timeframe. The airport handled around 1.3 million passengers in 2013 (a new record high), a number that increased from the 340,000 recorded 11 years ago. In addition, when compared to 2012 figures, Chisinau’s traffic increased by 8.2% last year. Overall, its passenger numbers experienced growth since 2003, with the exception of 2009, when a modest decline of 4.7% was noted due to the global economic recession strongly affecting the aviation industry. In the first nine months of 2014, for which traffic data is already available, the airport posted a massive increase of 30% when compared to the corresponding period of 2013, with 1.3 million passengers achieved until end-September. If the airport continues on this growth trajectory, it will achieve close to 1.7 million passengers in 2014, based on anna.aero forecasts.

Moreover, entering Chisinau’s monthly passenger data for 2013 into anna.aero’s Seasonal Variation in Demand (SVID) calculator, the airport performs well, producing a score of 8.64, a “good rating”. Against its fellow Romanian airport peers across the border, its 2013 score is significantly better than Bacau’s (13.77 – poor). On the other hand, when compared to Iasi, the primary international gateway for the north-eastern part of Romania, it performs worse than the country’s sixth busiest airport, which scores 7.88 (but still a “good” result). All in all, with over 80 seasonality performance evaluations completed so far, Chisinau has entered the rankings at #65 position, between London Southend (8.03) and Kazan (9.07).

Air Moldova controls 47% and 48% of seats and flights

Evaluation of Innovata schedule data for this January indicates that a total of 12 airlines are serving Chisinau, with Air Moldova maintaining its top position. The national airline evolved out of the local branch of Aeroflot in 1992 after Moldova achieved independence from the Soviet Union in August 1991. In addition, it has transitioned from a Russian fleet to a Western fleet and currently operates two A320s, one A321 and two E190s according to Planespotters.net. In the first 10 months of 2014, Air Moldova has carried around 488,000 of all passengers passing through Chisinau according to OAG Traffic Analyser. This month, the airline accounts for 47% and 48% of all weekly seats and flights respectively and operates a total of 22 non-stop routes from Chisinau, of which Moscow Domodedovo is the most frequently flown destination, being served with thrice-daily flights. Controlling 15% of seats at the airport, S7 Airlines — ranking second — links Chisinau to Domodedovo with thrice-daily flights as well. 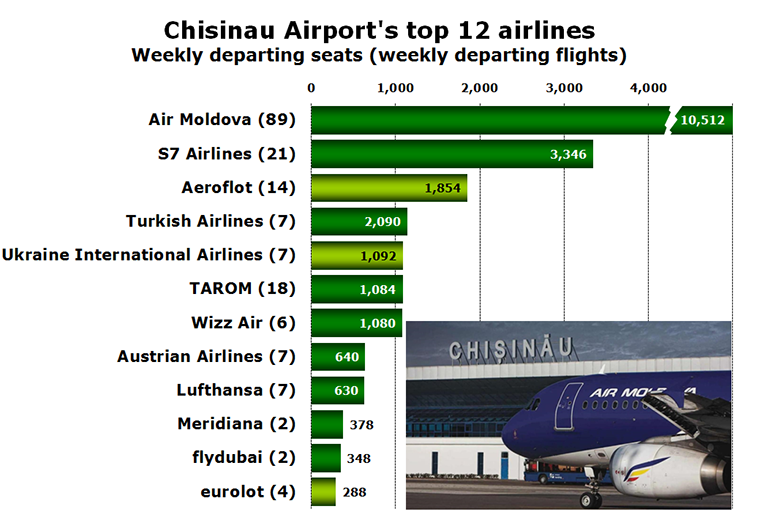 Weekly seat capacity for this January has gone up 47% (when compared to the same week last year), with five of the top dozen carriers recording capacity growth. Over the last 12 months, Chisinau has seen the arrival of three new carriers, Aeroflot, Ukraine International Airlines and eurolot (highlighted in bright green), with the former having touched down at the airport on 26 October with daily flights from Sheremetyevo; while Carpatair has withdrawn its operations from the airport. Air Moldova is not only the biggest airline, but also the fastest growing one, with a net increase of 4,004 weekly seats or 62% over the last 12 months, due to adding operations to Athens, Antalya, Barcelona, Dublin, Lisbon, Surgut as well as Turin over the past 12 months. By comparison, Meridiana has provided the greatest capacity decline (-74%), followed by Austrian Airlines (-13%) and flydubai (-7.9%).