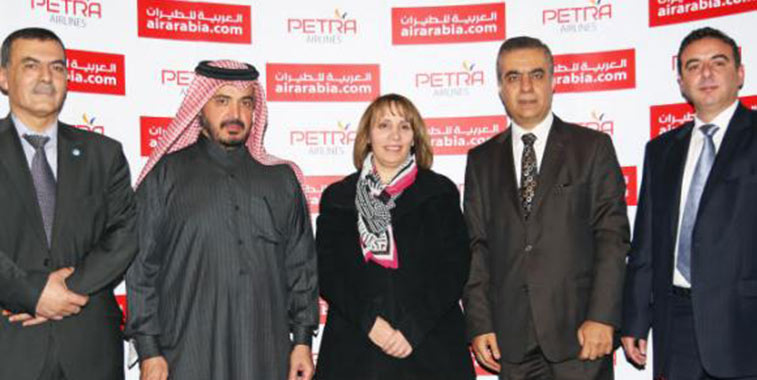 The deal is done. Air Arabia will open its fifth base in Amman, and will operate under the name of Air Arabia Jordan, following the acquisition of a 49% stake in local carrier Petra Airlines. Flights to Europe, the Middle East and North Africa are anticipated to start in Q1 2015 with two based A320s forming the initial fleet.

Air Arabia Jordan is most likely to start flights to Jeddah, Kuwait City and Erbil, with other possible destinations to Dubai and Riyadh also expected when operations begin in Q1 2015 – anna.aero’s analysis can exclusively reveal. The new LCC, set-up by Air Arabia, is to open a new base in Amman ‒ its fifth ‒ adding to existing hub operations at Sharjah, Ras Al Khaimah, Casablanca (Air Arabia Maroc) and Alexandra (Air Arabia Egypt), following the acquisition of a 49% stake in Petra Airlines, which will be rebranded as Air Arabia Jordan.

During the launch press conference on 5 January, Air Arabia Chairman Sheikh Abdullah Bin Mohammad Al Thani stated that the new carrier would fly “to a range of destinations across the Europe, Middle East and North Africa region” from Amman. He added that “launch routes will be announced in the coming weeks”, however our data elves at anna.aero are an impatient bunch and they like to use schedule data and analysis to determine the most likely new route candidates – just for our readers.

Air Arabia’s four bases currently comprise of the following operations for the week commencing 8 January 2015 (according to OAG Analyser):

In terms of trying to determine which are the most likely routes to be started by Air Arabia Jordan, in true LCC style it may well be considering a joining of the dots of its existing network. Considering existing connections between its five potential hubs, Air Arabia currently flies from Sharjah to Amman (twice-daily) and Alexandria (daily), but not to Casablanca. One hub-to-hub connection that might be likely is Air Arabia Jordan offering an Amman-originating service to Sharjah to complement or replace the existing double-daily operation by Air Arabia. The potential 53-kilometre domestic sector between Sharjah and Ras Al Khaimah is clearly not viable, however the LCC’s hub in the latter UAE city, set-up following the demise of RAK Airways last January, is yet to be connected to any of Air Arabia’s other bases. To conclude, Air Arabia Egypt also offers a twice-weekly link between Alexandria and Amman, but no further intra-hub connections from its Egyptian operation.

On this basis, Air Arabia Jordan may well consider new links from Amman to its other unserved hubs of Casablanca and Ras Al Khaimah, both of which are currently unserved. However, anna.aero’s data elves think that the fledgling LCC will most likely target markets with existing significant volumes of traffic, rather than pursuing niche markets in the initial start-up phase or route selection. 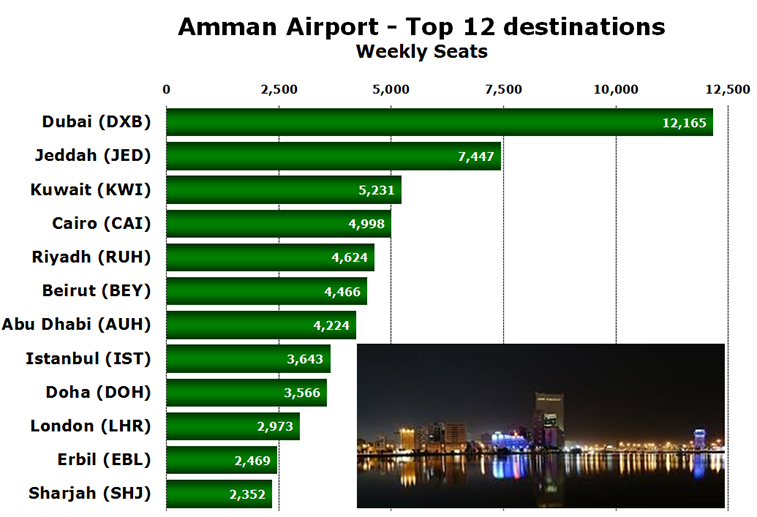 Looking at which airlines serve the top 12 destinations from Amman and what opportunities may present themselves to Air Arabia Jordan as a result, each of the potential routes has been considered as being either ‘highly likely’, ‘likely’ or ‘unlikely’. The ability of the LCC gaining airline designation on any bilateral agreements between the two nations has been evaluated in this analysis, with nations typically agreeing that the same number of carriers from each side can operate on city pairs. In addition to this, Petra is already present in some of these markets, so it would seem likely that Air Arabia Jordan would assume responsibility for flying these routes.

Following this analysis of Amman’s schedule data, the three routes currently offered by Petra – Jeddah, Kuwait City and Erbil – are deemed as the most likely to be started in the initial batch of routes. Complimenting these would be Dubai which offers the highest market potential due to the fact that it is 63% larger in terms of weekly seats than the #2 market of Jeddah, and it would seem that Jordan is able to designate a second carrier on the city pair. The ability to add a second carrier from the Jordanian side and the fact that Air Arabia and Air Arabia Egypt already serve the Saudi city of Riyadh, makes it another ‘likely’ service.

Cairo has been deemed as ‘unlikely’ purely because the airline may be unable to gain designation on the city pair as Royal Jordanian and Royal Falcon already operate from the Jordanian side. However if Air Arabia Jordan was permitted to fly to the Egyptian capital city then the fact that Air Arabia already offers flights from Sharjah and Ras Al Khaimah would make this route a ‘likely’ starter.

Beirut, Abu Dhabi, Istanbul and Doha have all been determined as ‘unlikely’ due to the fact that it would seem that only one carrier from each side of the respective bilateral agreements appear to have been designated. While this would seem a reasonable explanation for Istanbul, where our data elves have presumed that Pegasus Airlines would be a willing capacity provider on the city pair (from Sabiha Gökçen rather than Atatürk) but is curiously absent, it is harder to justify on the remaining three routes. However, with no real second tier carrier or LCC present at Doha, Abu Dhabi or Beirut to offer a real alternative to the incumbents of Qatar Airways, Etihad Airways and Middle Eastern Airlines, single airline designation seems to be the answer to the status quo.

The same cannot be said of London-Amman market, which must permit a second carrier, as easyJet did offer a London Gatwick to Amman service until May last year. However given the LCC’s failure to make the city pair work, London has been classified as ‘unlikely’ as a potential route for Air Arabia Jordan. The Levant nation was indeed one of just two country markets ‘lost’ by easyJet last summer, as the LCC also dropped Norway (Bergen) from its Gatwick network too.

The mysterious inclusion of Yemenia Yemen Airlines on the Amman to Beirut route is due to the fact that the carrier currently offers a twice-weekly Sanaa-Amman-Beirut service. However, having tried to book the Amman-Beirut sector on the airline’s website, fares were unavailable, so it is most likely that Yemenia does not have traffic rights on the city pair.

It is also interesting to note that Royal Jordanian currently serves 11 of the top 12 routes above and is understandably the carrier that will feel the impact most from the arrival of Air Arabia Jordan, given its position as the #1 carrier in Amman. Also noteworthy are the positions of Petra, the #3 carrier at the airport, as well as Air Arabia, which is also inside the top 12 (both highlighted below in light green). 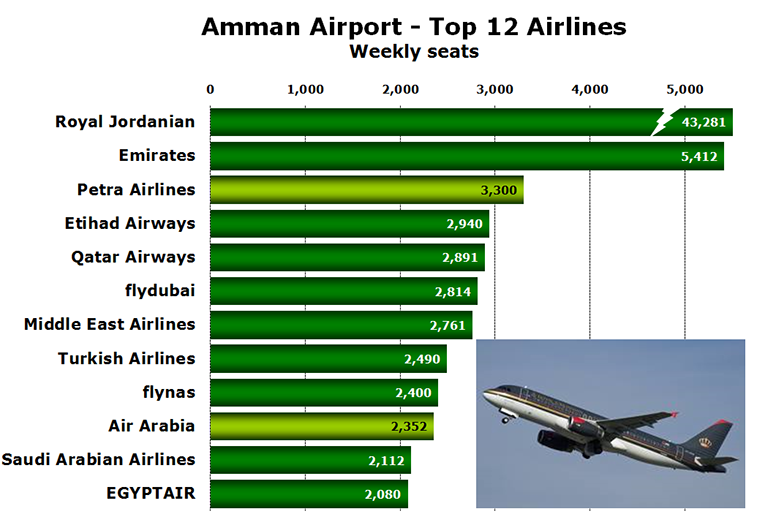 Air Arabia Jordan’s first two A320s will initially be based at Amman from Q1 and the fleet and network will grow as the business dictates. Launch routes will be announced in the coming weeks. Our data elves can’t wait to see if we’re right. If you have any different views on the potential start-up routes to our data elves, then feel free to comment.