Norwegian grows by 16% in 2014; Oslo Gardermoen accounts for 21% of weekly departures On 30 October, Norwegian celebrated the launch of its fourth long-haul service from Copenhagen, this time to Bangkok Suvarnabhumi, a sector served twice-weekly by the airline’s 291-seat 787-8s. The LCC’s long-haul network from the Danish capital includes Fort Lauderdale, Los Angeles and New York JFK.

Founded on 22 January 1993 to take over the regional airline services produced by Busy Bee for Braathens in western Norway, Norwegian has expanded considerably, becoming the third largest low-cost carrier in Europe (after Ryanair and easyJet), the second largest operator in Scandinavia (after SAS), as well as the ninth largest airline in Europe based on 2013 passenger numbers. Historically, Norwegian existed for many years as a regional airline operating a small fleet of Fokker F50s on behalf of Braathens. Following the merger of Braathens with SAS in 2002, the airline’s management decided to establish a low-cost carrier in the Norwegian domestic market utilising 737s. Unlike most other European LCCs, whose networks are dominated by international routes, which have high potential for stimulation with low fares, Norwegian’s network remained totally domestic until April 2003.

According to Planespotters.net, Norwegian’s fleet currently consists of 83 737-800s and seven 787-8s. With the arrival of its first 787-8, the LCC commenced its long-haul expansion in May 2013, under its legally separate entity – Norwegian Long Haul, with the launch of services from Oslo Gardermoen and Stockholm Arlanda to New York JFK and from Gardermoen to Bangkok Suvarnabhumi.

Recognised as the “biggest new airline in the US market” during last year’s US ANNIE Awards, Norwegian handled almost 24 million passengers in 2014, representing a double-digit increase of 16% over the previous year. In addition, its load factor grew by 2.6% to a record high of 80.9%. This has been facilitated by a number of new additions to its network in 2014, including new services from London Gatwick to Los Angeles, New York and Fort Lauderdale in July as well as from Copenhagen to Bangkok in October. 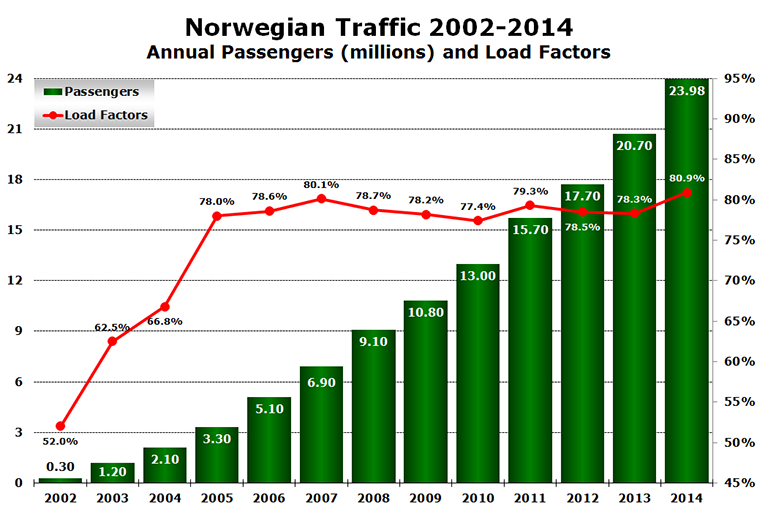 Looking at passenger development between 2002 and 2014, Norwegian’s traffic has visibly accelerated, with an impressive average annual growth rate (CAGR) of 40% over this period. Furthermore, the carrier’s load factors have fluctuated between 62.5% and 80.9% between 2002 and 2014. The carrier has had a fantastic development in the last 13 years, as its passenger numbers experienced double-digit growth each year. Notably, even in the worst year of the recession, the LCC’s traffic continued to grow rapidly, recording in 2009 a yearly increase of 19% when compared to the previous year.

Gardermoen accounts for 21% of weekly departures

Examination of Norwegian’s current network for this January reveals that the carrier serves a total of 84 airports, of which 17 are in Norway. In fact, the airline’s top dozen airports account for 70% of total flights this month, which is down 1% from last year’s figures. Not surprisingly, Oslo Gardermoen is by far the airline’s busiest airport by weekly departures (21%), posting a decrease of 9% or a net decline of 59 weekly flights this January when compared to data from the same period last year. The main gateway to the capital of Norway is connected to 62 destinations, of which the 325-kilometre domestic sector to Bergen is the LCC’s most frequently served airport pair from Oslo, with 69 weekly operations. In addition, Norwegian airports (highlighted in bright green) hold four of the top 12 places, when ranked by weekly departures. Ranking second in terms of weekly flights, Stockholm Arlanda posted 1.7% growth, being connected to 38 destinations. 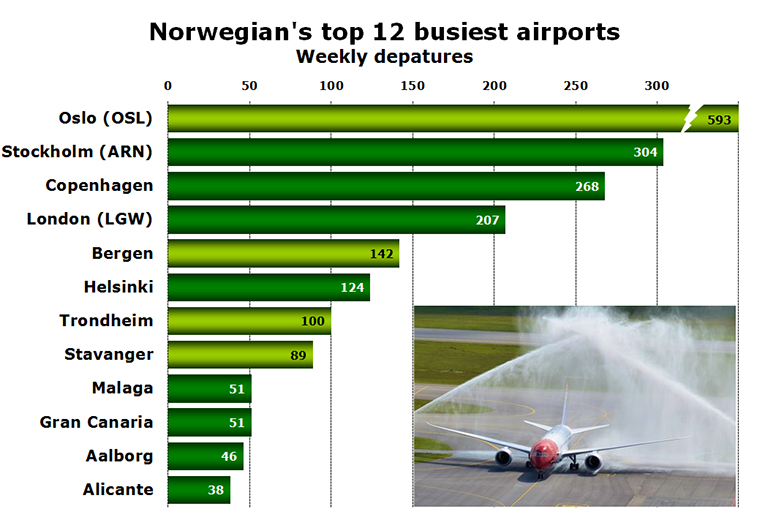 Norwegian’s weekly departures are up just 1% this January when compared to data from the same week last year, with five of the top 12 airports growing, while operations at Gran Canaria remained unchanged. Therefore, the stand out performance is that emanating from operations at London Gatwick, having increased by 36% or 55 weekly flights in the last year. The carrier has significantly expanded at London’s second busiest gateway, with the addition of new services to Madrid, Berlin Schönefeld, Warsaw Chopin, Budapest, New York, Fort Lauderdale, Funchal, Los Angeles, Larnaca, Grenoble, La Palma and Salzburg over the past 12 months. By comparison, Trondheim witnessed the greatest decline, as Norwegian has trimmed 15% of its weekly departures at the airport.

Norwegian market accounts for 40% of seats

Despite serving a total of 31 country markets, Norwegian is focussed heavily on the domestic sector, with 40% of its seats in January having an origin or destination there. With the exception of Norway, Sweden is the airline’s largest European market, accounting for 15% of weekly seats and being served with a combined 418 weekly flights to Stockholm, Gothenburg, Kiruna, Lulea, Malmo and Umea. 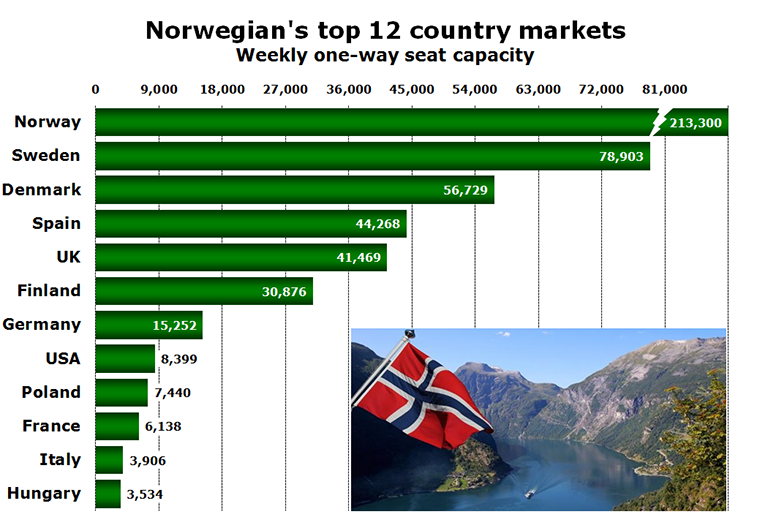 The United States is the only country market in this year’s top 12 ranking served by Norwegian outside Europe. The airline operates services to Fort Lauderdale, New York, Los Angeles, Orlando and Oakland with a combined total of 29 weekly departures. A new entrant into this year’s ranking is that of #12 country market, Hungary, which experienced 36% growth, due to the LCC adding thrice-weekly flights from Gatwick to Budapest on 30 March as well as increasing its frequency by an additional weekly departure from both Copenhagen and Oslo to the Hungarian capital over the last 12 months.