An impressive 1,351 airframes were delivered to worldwide airline customers by Airbus and Boeing last year, turning 2014 into a record year. While the 2012, 2013 and 2014 delivery winner Boeing managed to further improve its performance, as it delivered 73 units more than in the previous year, Airbus improved its delivery record by a modest three units more, passing the 600 annual deliveries milestone for the second time. All in all, the annual deliveries for 2014 increased by 6% when compared to the previous year. 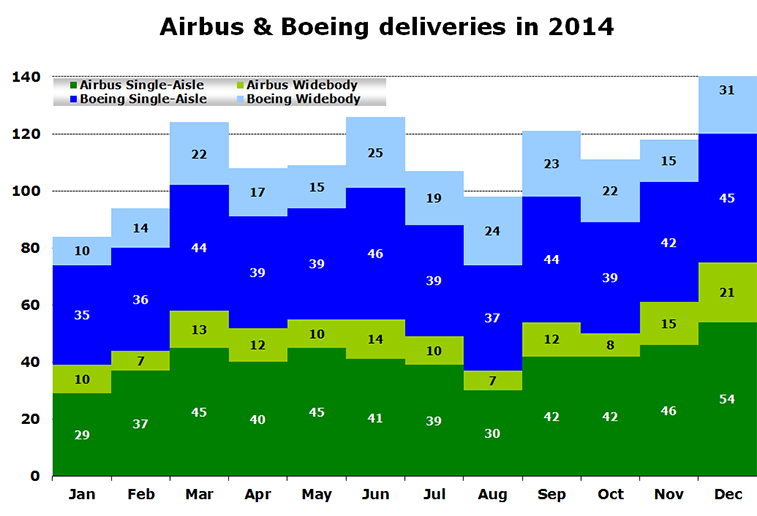 Interestingly, the discrepancies between the two companies appear to have grown with regard to wide-body aircraft output, with Boeing increasing the gap to 98 units (up from 75 in 2013). The American manufacturer handed over a total of 102 units of the 787-8 type in 2014, 37 units more than in the previous year. Across the pond, Airbus had a couple of weaker months as the year progressed, delivering just 30 A380s, five more than in 2013. Other highlights of 2014, include the delivery of the first A350-900 to Qatar Airways on 18 December, as well as the incorporation of the first 787-9 by All Nippon Airways into its fleet on 30 June. Overall Boeing delivered nine 787-9 to airlines around the world in 2014.

The European manufacturer remains the leader in terms of narrow-bodies in 2014, as it delivered five single-aisle units more than its US counterpart. This is despite Boeing increasing its narrow-body deliveries by 10% over 2013 figures. 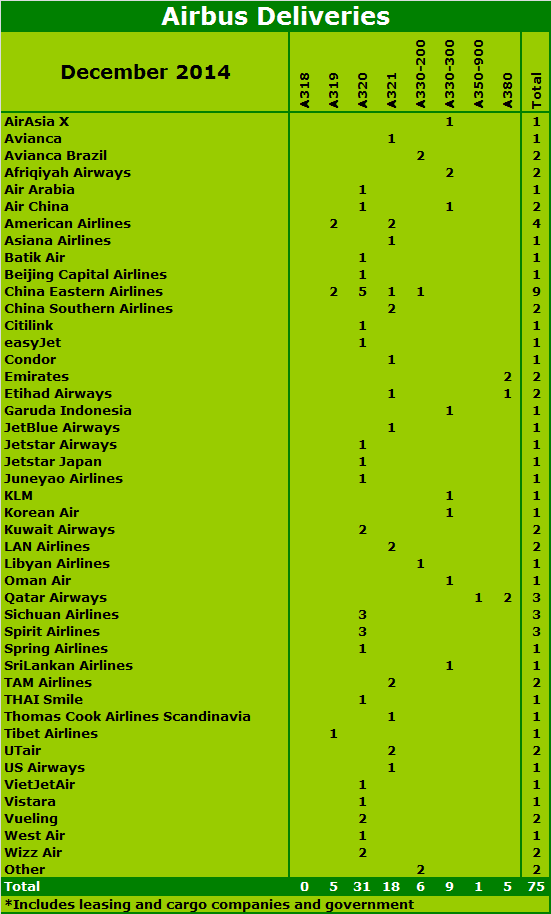 Airbus closed December with a total of 75 units delivered to airlines, which constitutes 14 more airframes than the amount delivered in November 2014 as well as 11 more than in the corresponding month last year. Looking at the annual deliveries, the European manufacturer delivered 629 units, representing an increase of 0.5% over 2013 figures.

One again, narrow-bodies deliveries in December were led by the A320 (31 units) with 54 narrow-body airframes provided to airlines around the world. Shanghai-based China Eastern Airlines was one of the four airlines to incorporate more than two narrow-body units from Airbus into their fleet, as it received five A320s, two A319s and one A320. Besides this, other noteworthy carriers to receive more than two units were American Airlines (two A319s and two A321s), Sichuan Airlines (three A320s) and Spirit Airlines (three A320s); while six other carriers saw two Airbus single-aisles join their respective fleets in December – Kuwait Airways, LAN Airlines, TAM Airlines, UTair, Vueling and Wizz Air.

Looking at wide-body deliveries, Airbus handed over 21 airframes in December, representing six more units than in the preceding month, and five more than in the corresponding month of 2013. Following November’s delivery of three A380s, the European producer handed over five units of the type in the 12th month of 2014, two each to Emirates and Qatar Airways, as well as one unit to Etihad Airways. On 31 December, Boeing delivered Etihad Airways’ first 787-9, which sports the airline’s new “Facets of Abu Dhabi” livery, which was revealed at a ceremony earlier this year. The colours, are reminiscent of the desert landscape, inspired by the culture, Islamic design and architecture motifs of the UAE. Celebrating the delivery are: Larry Loftis, VP and GM 787 programme, Boeing; Abdulla Alsaboosi, Consul General to the UAE in Los Angeles; and Peter Baumgartner, CCO, Etihad Airways. 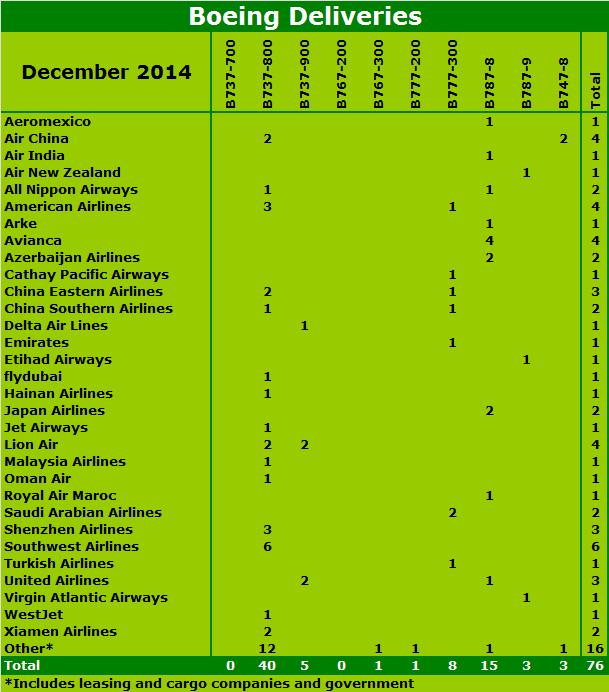 An impressive 31 wide-body airframes (a new record high) were handed over by the American manufacturer in December 2014, 16 more units than in November. Moreover, Boeing bettered its year-on-year performance, delivering five more wide-body units than the 26 it managed in the corresponding month of 2013. Following eight and six 787-8s delivered to airlines in October and November respectively, Boeing handed over a total of 15 units of the type reaching customers in the last month of 2014, including four to Avianca, and two each to Azerbaijan Airlines and Japan Airlines. Interestingly, Air New Zealand, Etihad Airways and Virgin Atlantic Airways received one 787-9 each.