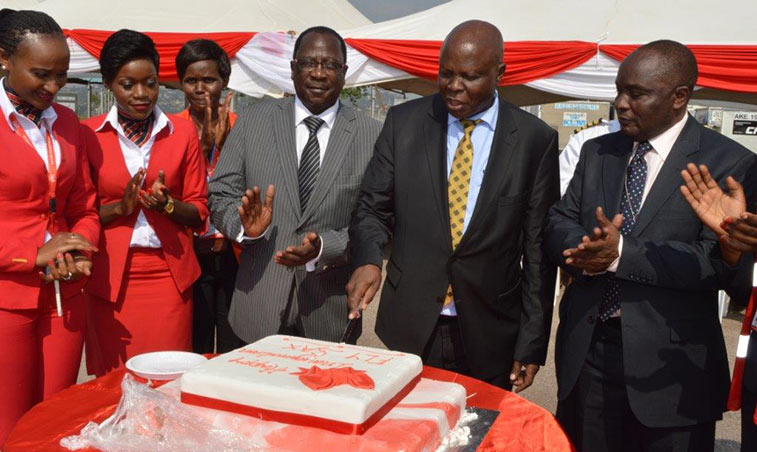 On 9 January, Fly-SAX (Kenya’s premier safari and private charter airline) expanded its international offering from the country’s primary gateway – Nairobi, with the addition of twice-daily flights to Entebbe in Uganda. Cutting the celebratory cake’s first slice are: Stephen Chebrot, Minister for Transport, Uganda; and Fly-SAX’s staff, including the Chairman, Charles Wako (left).

While it is home to an estimated population of 45 million, Kenya covers an area of almost the same size as mainland France, being classified as the largest economy by GDP in southeast and central Africa. Famous for its tea, coffee, flowers and athletes, tourism plays a key role in the country’s economy thanks to the many national parks, game reserves and beaches along the Indian Ocean. In fact, tourism makes a major contribution to its economy, adding 61% to the GDP. Therefore, the air transport industry plays an important role in supporting Kenyan tourism.

According to Innovata schedule data for January 2015, the Kenyan market is being served by 19 commercial airports, of which Nairobi (perhaps better known as Jomo Kenyatta International Airport) controls around 74% of the country’s scheduled seat capacity. Besides Nairobi, there are other two airports to offer international services, namely Nairobi Wilson and Mombasa. Overall, Kenya’s annual seat capacity has grown by 2.7% since anna.aero last looked at this country market four years ago. Benefitting from this favourable economic climate, Fly-SAX (also known as East African Safari Air Express) expanded its international offering from Nairobi on 9 January, with the addition of twice-daily flights to Entebbe in Uganda.

Examination of Innovata annual capacity reveals that around 6.3 million one-way seats were offered on air services involving Kenyan airports in 2014, representing an increase of 8.5% when compared to 2013 figures. Therefore, domestic traffic experienced a double-digit growth rate of 12%, while the international sector increased by just 6.8%. 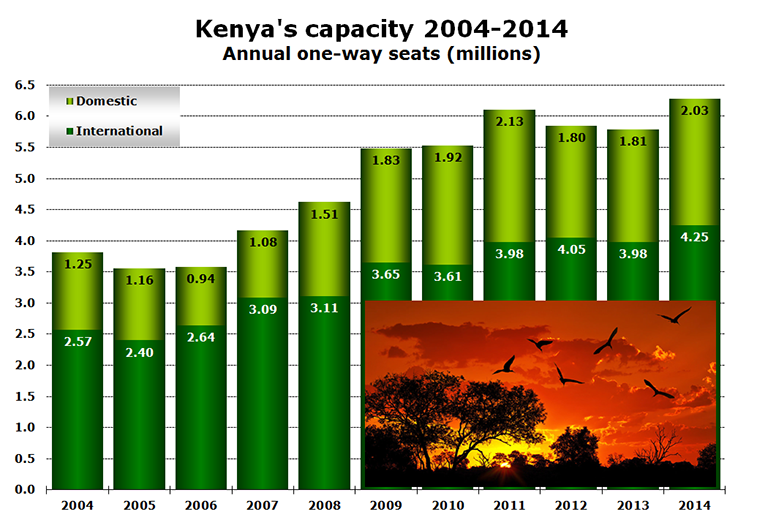 Looking at annual seat figures between 2004 and 2014, the combined capacity of the 19 Kenyan airports grew with an average annual growth rate (CAGR) of 4.6%, with the international sector (+4.7%) outperforming the domestic market (+4.5%). Also of note, the international travel market has increased by 65%, while the domestic one has gone up 62%, when comparing 2014 to 2004. Not surprisingly considering the country’s political and economic instability in recent years, Kenyan aviation saw an uneven development in the period following 2009.

Kenya Airways controls over half of weekly capacity

As of January 2015, the top 12 carriers serving the Kenyan market account for 90% of all weekly seats, which is up 3% when compared to the corresponding week in 2014. Launched in January 1977 following the breakup of the East African Community and the subsequent disintegration of East African Airways, Kenya Airways remains by far the most dominant player in the country, as it commands over half of the market, being eight times bigger than the second operator, Five Forty Aviation. A full member of SkyTeam since June 2010, Kenya Airways (which handled 3.7 million passengers in 2013) operates on a total of 45 airport pairs, of which 42 of them are international routes. Dar es Salaam in Tanzania and Entebbe in Uganda are the flag carrier’s most frequently served international destinations, both with five daily flights from Nairobi. Domestically, the airline is connecting Nairobi to Kisumu, Mombasa and Malindi. 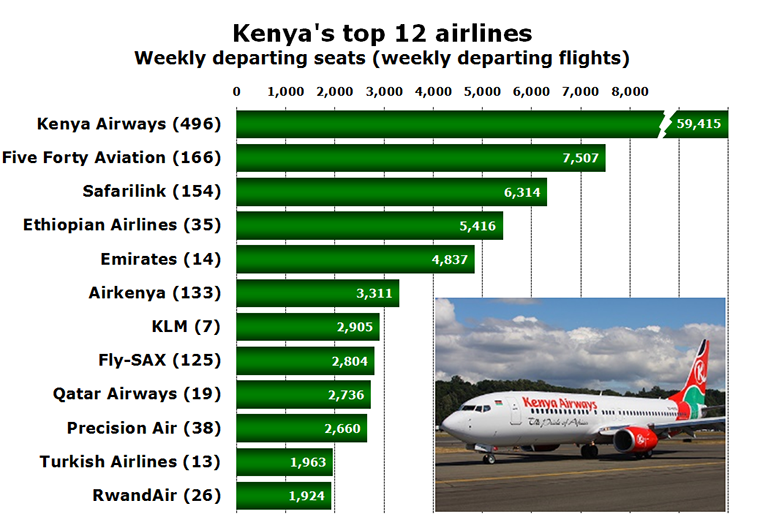 Ranking second, Five Forty Aviation offers less capacity than the flag carrier, but it does operate nine domestic links, three times more than Kenya Airways. The low-cost carrier which commenced operations in 2006 offers up to thrice-daily flights between its Nairobi base and Mombasa. In fact, the 422-kilometre sector to the second largest city in Kenya provides around 37% of the country’s domestic seat capacity. In addition, Safarilink operates eight domestic routes from Nairobi’s second gateway at Wilson, which is just five kilometres from the city but has a relatively short runway.

While the domestic sector is Kenya’s biggest country market representing 31% of all weekly seats, 44 countries can be reached non-stop from Kenyan airports according to Innovata schedule data for this January. At around 9,600 weekly seats and 18% more than in January 2014, the UAE leads in terms of international markets, being served by five carriers (Emirates, Etihad Airways, Air Arabia, Kenya Airways from Nairobi and RwandAir from Mombasa) with a combined 38 weekly flights. Second-ranked neighbouring Tanzania is served with around 110 weekly departures offered by Five Forty Aviation, ZanAir, Fly-SAX, Safarilink, Kenya Airways, Airkenya as well as Precision Air. 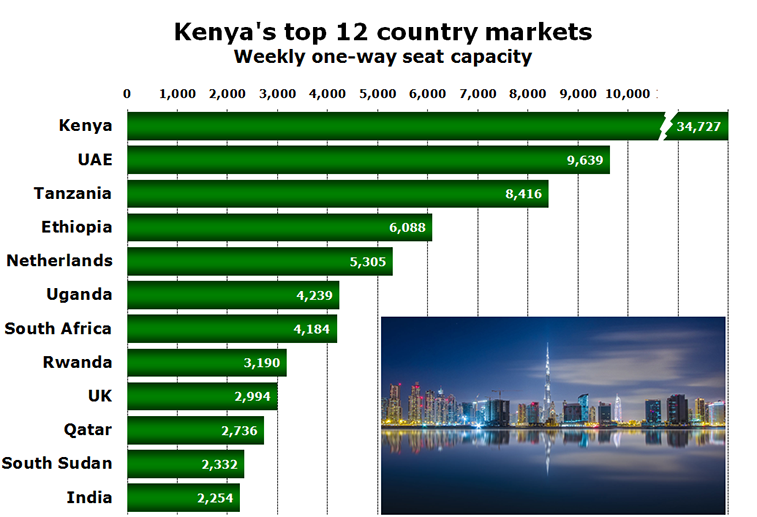 Neighbouring Ethiopia has seen the most significant growth in weekly capacity, 44% or an additional 1,857 weekly seats, as a result of Ethiopian Airlines increasing its frequency on the Addis Ababa-Nairobi sector from twice-daily to four times daily. By comparison, the UK has witnessed the most significant decrease (-28% or 1,133 fewer seats), due in part to Thomson Airways having withdrawn its weekly flights from London Gatwick, as well as to British Airways having decreased its frequency on the London Heathrow-Nairobi route by one weekly flight. 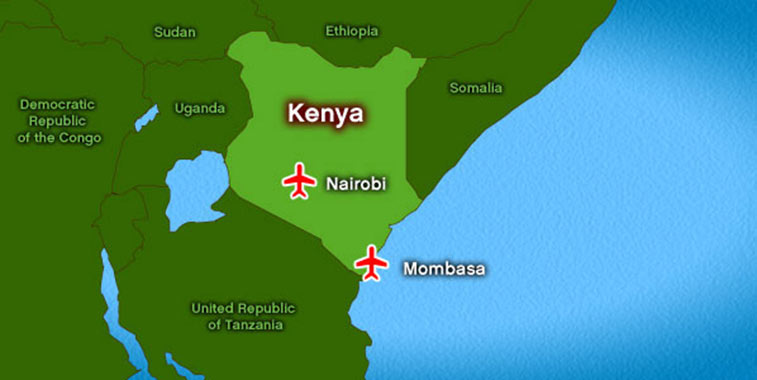 Tourism makes a major contribution to Kenya’s economy, adding 61% to the GDP, with the country being served by three international airports, namely Nairobi, Nairobi Wilson and Mombasa.