On 13 October, Virgin America touched down for the first time at Dallas Love Field Airport with a “Downtown Express” flight hosted by Sir Richard Branson, Founder, Virgin Group, with an acoustic in-flight performance by Kacey Musgraves. Following the opening of a new secondary base at Love Field, the carrier linked Dallas’ smaller airport to Los Angeles, San Francisco and Washington Reagan.

Established on 8 August 2007 to provide low-fare, high-quality for long-haul point-to-point service between major metropolitan cities on the US eastern seaboard and the US west coast, Virgin America has expanded considerably in the domestic market, while also operating a small number of international routes (to Cancun, Puerto Vallarta and San Jose del Cabo in Mexico). With nearly 1% of weekly domestic seats (according to Innovata schedule data for week commencing 20 January 2015), Virgin America has established itself as the 12th largest operator in the US, behind Allegiant Air and above Sun Country Airlines. Nonetheless, looking at ASKs (Available Seat Kilometres – takes into account sector length and the size of aircraft), the airline’s share of the domestic market for this month stands at around 1.7% (being ranked 10th). According to Planespotters.net, Virgin America’s fleet currently consists of 43 A320s and 10 A319s, however the airline announced on 17 January 2011 a firm order for 30 A320neos to be delivered between 2020 and 2022.

Examination of the airline’s operational results for 2014 indicates that Virgin America handled around 6.5 million passengers last year, representing an increase of 2.8% over 2013 figures. In fact, 2014 was an excellent year for Virgin America, as RPK (Revenue Passenger Kilometres – takes account of average sector length and load factor) went up 2.7% and the load factor grew by 2.1% to 82.3%. Based at San Francisco Airport, the airline also serves Los Angeles and Dallas Love Field as focus cities, with the latter having become a secondary hub for the carrier on 13 October 2014, when Virgin America switched its operation from Dallas/Fort Worth.

According to Innovata schedule data for this January, the carrier operates 35 non-stop routes to a total of 21 airports. Regarding its most significant services, the top 12 airport pairs account for 31% of all weekly capacity, representing a 1% decrease from last year’s figures, with San Francisco-Los Angeles maintaining its top position in 2015. In fact, Virgin America’s three hubs dominate the airline’s largest airport pairs in terms of weekly capacity, with all the routes in this year’s ranking featuring either of the three bases. 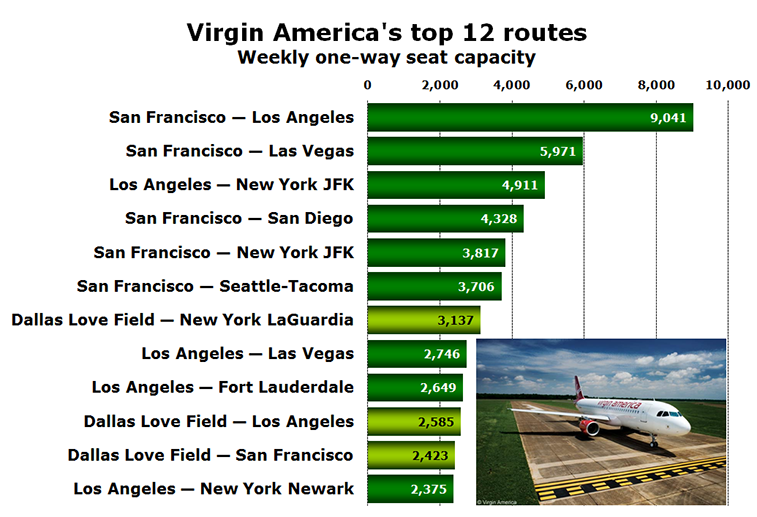 Virgin America’s seat capacity noted a modest 0.4% increase when compared to data from the same week last year, with three of the top dozen airport pairs growing, while the links between Los Angeles and New York JFK, Fort Lauderdale and New York Newark saw their operations unchanged. The 542-kilometre route between San Francisco and Los Angeles is not only Virgin America’s biggest airport pair, but also the fastest growing one, with a net increase of 1,048 weekly seats or 13% over the last 12 months. By comparison, the 4,162-kilometre sector from San Francisco to JFK posted the greatest capacity decline, albeit marginal (-1.5%). New entrants into this year’s ranking are the three links (highlighted in light green) commenced from the airline’s latest secondary hub at Love Field.

Looking at Innovata weekly departures being offered by Virgin America from individual airports reveals that the airline is growing this winter at five of its top 13 airports, while operations at Newark, San Diego and Washington Dulles have remained unchanged. The carrier’s two bases at San Francisco and Los Angeles, accounting for a combined total of 536 weekly departures, will both see decreases of 3.4% and 13% respectively, coming as a result of diversifying its domestic network. Over the past 12 months, Virgin America has started operating at Love Field and LaGuardia, while it has ceased services at Dallas/Fort Worth, San Jose and Philadelphia. 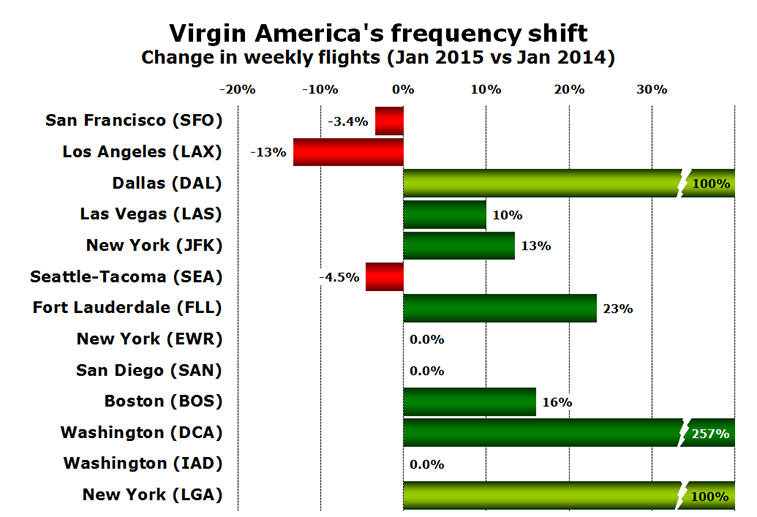 On the other hand, the airline is expanding hugely at Washington Reagan, with the airport experiencing an impressive growth of 257%, following the introduction of 18 weekly flights from Love Field on 13 October. Moreover, the number of weekly departures across its network is expected to go up by a modest 0.5% this winter.