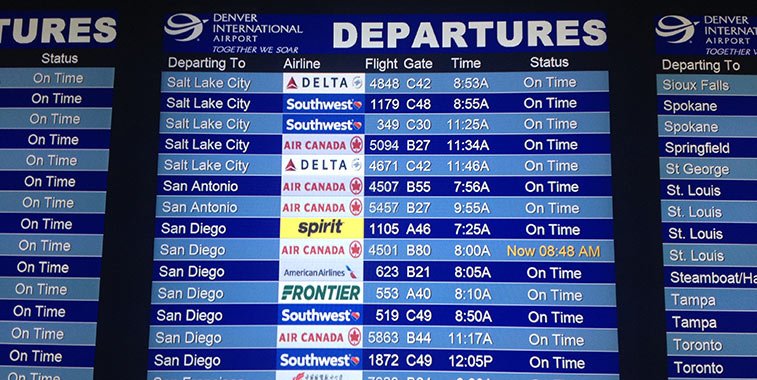 In case you were wondering, Air Canada doesn’t fly between Denver and San Diego but it does codeshare with Star Alliance partner United Airlines, which does. American Airlines does not operate non-stop between the two cities. But it does codeshare with US Airways which operates one-stop flights between Denver and San Diego via its major hub at Phoenix. This week’s fare analysis however only looks at non-stop flights.

One-way fare data was collected for the next five weeks for all four airlines. Where there were multiple daily flights, only the cheapest fare on any of the flights was recorded. In each case the cheapest fare type was chosen. With diverse business models ranging from ULCC (Spirit Airlines) to legacy carrier (United Airlines), what you get for your basic fare will vary in terms of baggage allowance, allocated seating, complimentary food and drink etc. 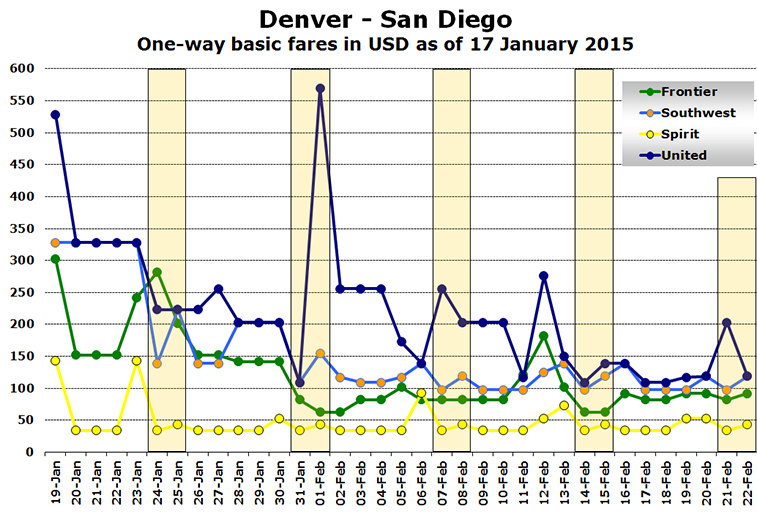 Source: Airline websites as of 17 January 2015. Shaded days are Saturdays and Sundays.

Looking first at flights from Denver to San Diego, it quickly becomes clear that Spirit’s fares are far below those of its competitors. This is not surprising as it is a true ULCC and also a new entrant on the route, and thus keen to either attract new passengers, or lure away passengers currently flying with one of the other three carriers. Frontier is the second cheapest as it migrates from being an LCC to a ULCC. Southwest is third and United fourth, with United apparently matching Southwest’s fares to the Dollar on several days. 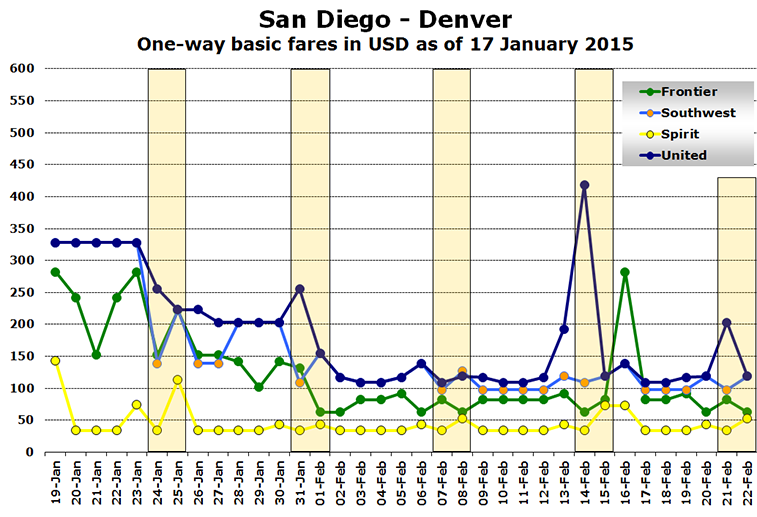 Source: Airline websites as of 17 January 2015. Shaded days are Saturdays and Sundays.

For the San Diego to Denver sector the same ranking is repeated. Again, there is a notable similarity in United and Southwest’s fares, with these two carriers offering the most weekly flights. Looking at the two graphs together reveals another interesting point. Romantics will have noticed that Valentine’s Day (14 February) falls this year on a Saturday, encouraging weekend breaks. Looking at the fare spikes around that weekend would suggest that the good folk of Denver consider San Diego more of a romantic weekend destination in mid-February, than the other way round. There are clear fare spikes for Denver-San Diego traffic on 12/13 February with a corresponding spike on 15/16 February on San Diego-Denver fares.

If we take a simple mathematical average of all the fares shown across this five week period for each airline in each direction, the difference in fares becomes even more apparent. It would be interesting to revisit this route in a year’s time and see if Spirit is still significantly cheaper. Even as a ULCC, the fares it is currently offering in this market would not make this a profitable route at this time. We would like to thank Manuel Moreno of Denver Airport for getting up extra early on Tuesday and providing us with pictures for this story. The Spirit Airlines service to San Diego departs at 07:25 from Gate A46. If you think that’s early, Denver’s first morning outbound flight that day was with American Airlines to Dallas/Fort Worth, which had a scheduled departure time of 05:30.