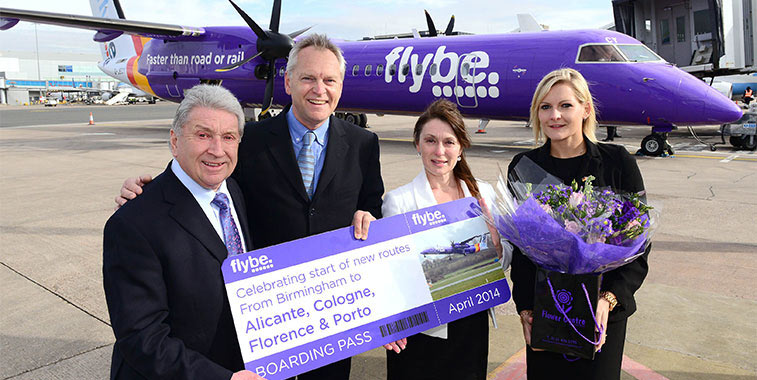 Among the three airlines that have touched down at Florence Airport over the past 12 months is Flybe, which introduced six weekly operations from Birmingham on 10 April. The UK regional carrier is currently operating four weekly departures as of January 2015. Celebrating the route launch to the Italian airport are: Peter Mathews CMG, Paul Willoughby, Mandy Haque and Beatrix Troger.

Established in the early 1930s as Peretola Airport, Florence is the primary gateway to the capital city of the Italian region of Tuscany and of the province of Florence, having a population of around 380,000. Perhaps better known as Aeroporto di Firenze-Peretola, the facility is ranked as the country’s 17th busiest airport according to anna.aero’s European Airport Traffic Trends database, behind Lamezia Terme, but above Venice Treviso. In addition, Florence is also the smaller of the two main airports in the Tuscany region, the larger being Pisa (with 4.4 million passengers in 2014). Operating as a base for the Spanish LCC Vueling, the airport offers 16 non-stop services flown to seven European countries, according to Innovata schedule data for this January. 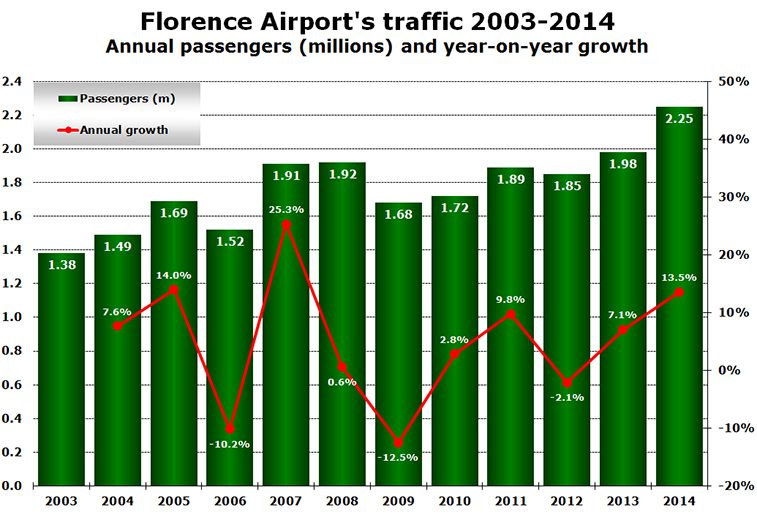 Analysis of data facilitated by the airport authority indicates that while the traffic trend was fairly uneven between 2003 and 2011, and peaked in 2008 at 1.9 million passengers, Florence has consolidated its annual passenger performance after 2012, reaching around 2.3 million passengers last year (a new record high). Vueling’s decision to establish a new base at the airport on 5 December 2012, had a major impact on traffic flows to and from the airport, resulting in an increase of approximately 7.1% in 2013. Furthermore, according to 2014 traffic data, Florence recorded a double-digit increase of 14% in passenger numbers, when compared to 2013 figures. Overall, the airport’s traffic increased with an average annual growth rate (CAGR) of 4.2% between the 2003-2014 timeframe.

Air France controls 20% and 17% of seats and flights respectively

Evaluation of Innovata schedule data for this January indicates that a total of 12 airlines are serving Florence, with Air France maintaining its top position. The SkyTeam member accounts for 20% and 17% of weekly seats and flights respectively and operates a total of 34 weekly departures on the 880-kilometre sector to Paris CDG. Ranking second with a weekly seat share of 18%, Vueling connects Florence to Barcelona, Bari, Catania, London Gatwick, Paris Orly and Palermo with a combined total of 30 weekly flights. 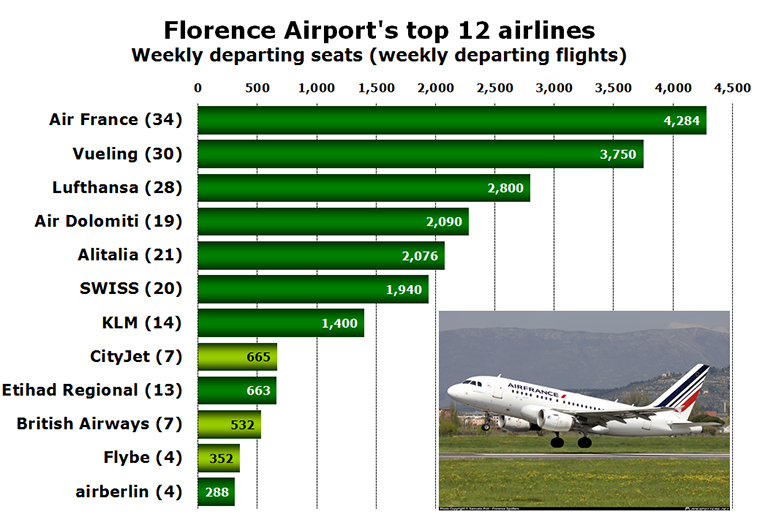 Weekly seat capacity has gone up 8.5%, with Etihad Regional (+117%), Vueling (+20%), Air France (+17%), KLM (+17%) and airberlin (+2.6%) noting growth, while Lufthansa saw its operations unchanged (when comparing data from this January with the same week last year). Interestingly, Florence has seen the arrival of three new airlines over the past 12 months, namely British Airways and CityJet from London City, as well as Flybe from Birmingham. Etihad Regional has more than doubled its capacity at the Italian airport, as a result of introducing daily flights from Zurich on 2 May.