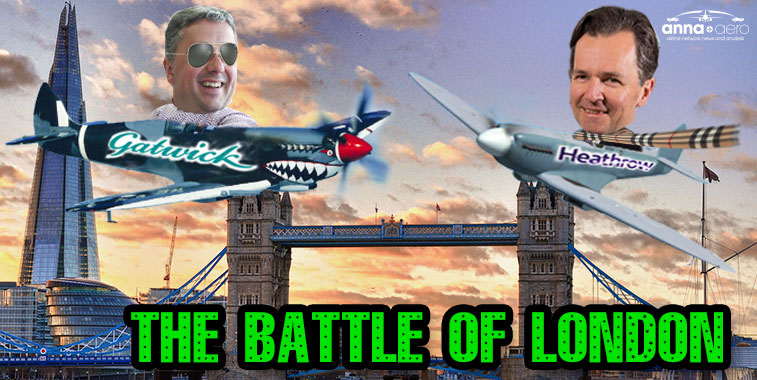 anna.aero looks at the facts regarding operations and trends at Heathrow and Gatwick and laments how the perceived economic benefits of one or two runways (anything up to $500 billion) would pay off over a quarter of the national debt. As each tries to make the most convincing case for why it should get the new runway, it seems there’s only one way to find out: FIGHT. Both airport CEOs, Wingate (LGW) and Holland-Kaye (LHR), will also present at Future Travel Experience Europe 2015, an anna.aero sister initiative taking place in Central London, 2-4 February.

With the Airport Commission decision on where London will get its new runway only a few months away, the war of words between Heathrow and Gatwick appears to be escalating as each tries to make the most convincing case for why it should get the new runway. So this week anna.aero has decided to present a range of factual data about the two airports.

Making great use of existing runways 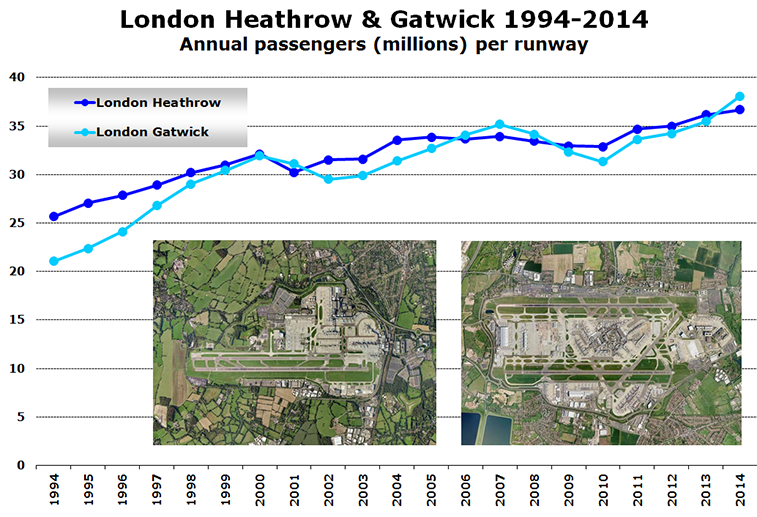 Passenger numbers per runway at Heathrow and Gatwick for the last 20 years show that since around 1997 the two airports have handled similar numbers of passengers per runway, rising from 30 million per runway in 1998, to over 36 million per runway, with Gatwick managing a record-breaking 38.1 million on its single runway in 2014. Just-released traffic data for 2014 shows that, while Heathrow traffic grew a modest 1.4%, Gatwick’s traffic surged ahead by 7.4%. In 2013 both airports had grown by between 3% and 4%.

Connecting traffic accounts for over one third of passenger numbers at Heathrow, but less than 10% at Gatwick. One claim that has been made is that hub traffic is declining at Heathrow. However, according to UK CAA Survey data, connecting traffic was 36.3% at Heathrow in 2003 and, since 2008, it has hovered between 34% and 38%. In both 2012 and 2013, the figure was just below 37%, indicating no decline in connecting traffic.

Almost 30% of Heathrow’s throughput is business traffic but, with the remaining 70% travelling for leisure, that means that Heathrow still handles more leisure passengers in absolute terms than Gatwick. According to the CAA survey, only around 13% of Gatwick passengers are travelling on business; around one in seven.

In terms of where passengers come from, only around 40% of passengers using Heathrow are originating in the UK, while at Gatwick this figure is over 70%. This suggests that in 2014 UK-based passengers accounted for 29 million passenger movements at Heathrow and 27 million at Gatwick – not a huge difference. However, for passengers originating outside of the UK, four times as many used Heathrow (44 million) as used Gatwick (11 million).

Now let’s take a look at the leading airlines at each airport. At Heathrow, British Airways is the clear leader offering more than seven times as many seats in 2014 as its nearest rival, Virgin Atlantic Airways. However, BA still accounts for less than half (48%) of all scheduled seats at the airport, where a total of 15 airlines account for 80% of seats; a total of 84 airlines served the airport in 2014. 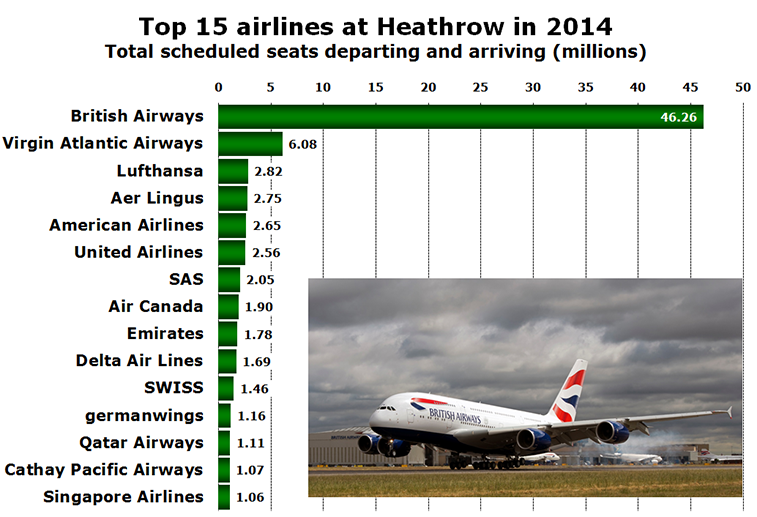 At Gatwick, easyJet has been determined in acquiring available slots and building its presence from nothing in 1998, to being the leading airline a decade later. Norwegian only began serving Gatwick in October 2007, but is now the third busiest airline, with an 8% share of seat capacity, and a route network of 30 destinations, including three US cities. In total, the top 15 airlines account for 95% of scheduled seats at Gatwick, with 52 airlines operating scheduled services at the airport in 2014. 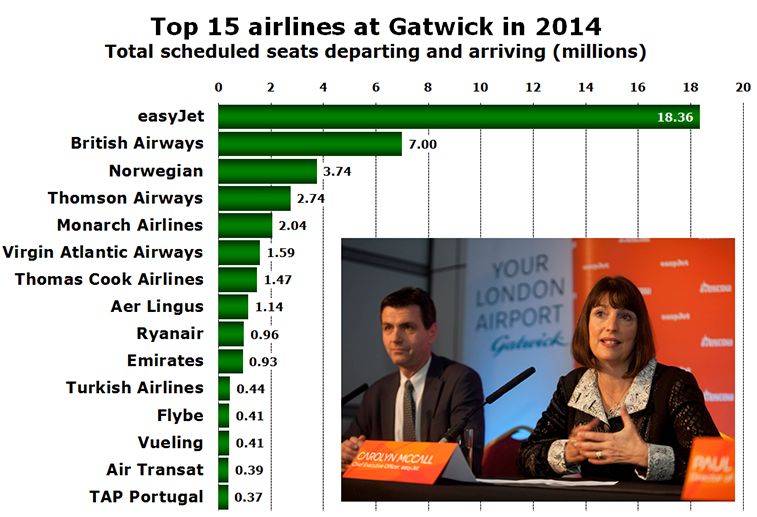 Unsurprisingly, British Airways is very much in favour of a third runway at Heathrow. easyJet also supports expansion at Heathrow (!) claiming Gatwick charges could rise to pay for construction. Having worked hard to attain its dominant (and profitable) position, easyJet also potentially has more to lose than to gain by an additional Gatwick runway, as it does not benefit from connectivity in the way BA does at Heathrow (remember up to 38% of passengers using Heathrow change planes, most of them connecting with BA services).

Analysis of seat capacity from both airports in 2014 by country market reveals the importance of the US at Heathrow. Almost 20% of all seats departing Heathrow were bound for the US. Meanwhile, UK and German destinations were virtually tied for second place with around 8% each. Among the top 15 country markets from Heathrow, six were outside of Europe (shown in light green). While passengers heading to the US, India, Canada, Hong Kong and South Africa were most likely to be ending their journeys in those countries, many passengers heading to the UAE (Dubai and Abu Dhabi) would be connecting onwards to other destinations. In total the top 15 country markets account for 70% of all seats, with 79 countries served during 2014. 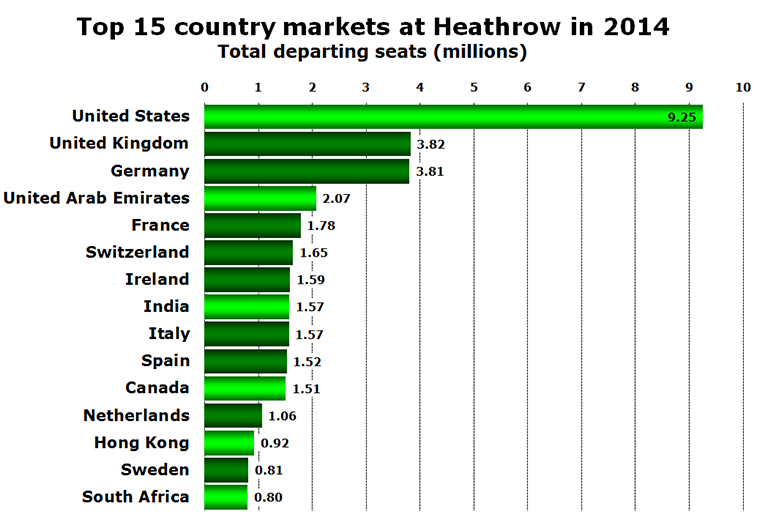 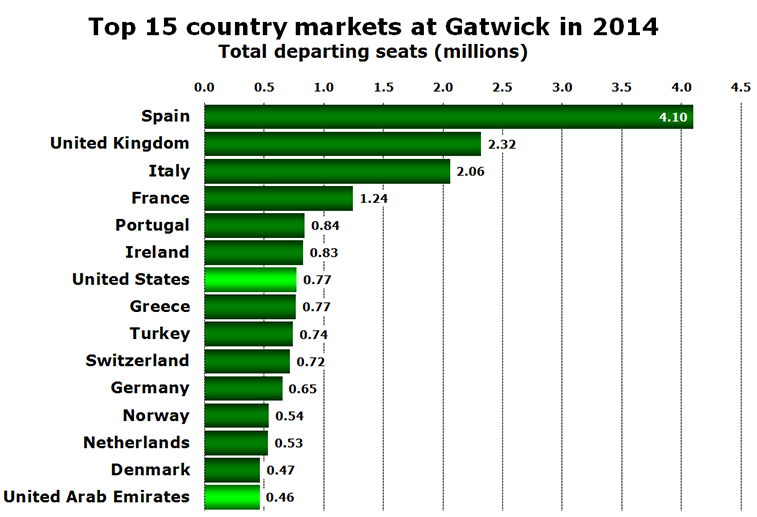 Over 250 new services started at Heathrow and Gatwick since 2010

Heathrow and Gatwick used to be owned and operated by the same company, the glamorously-titled BAA. However, since December 2009, the airports have been competing with each other, with Gatwick now owned and operated by Global Infrastructure Partners. Since then, the two airports combined have seen the launch of over 250 new services with Gatwick responsible for almost 180 and Heathrow for a further 80 (this is not the same as the number of new destinations, as a significant proportion of new services were launched on routes already served by other competing carriers). 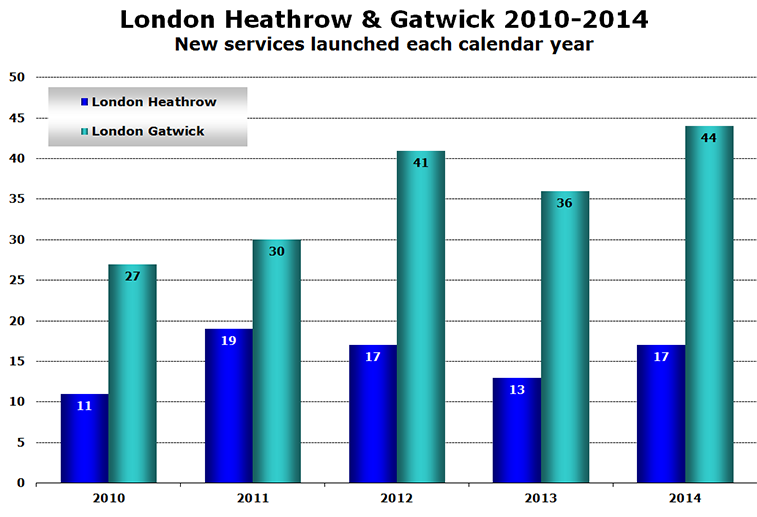 A year-on-year analysis of schedule data for the peak month of August reveals the comings and goings of airlines at London’s two busiest airports. Some of these carriers (such as Aegean Airlines at Gatwick) began operations before the year indicated, but were not operating flights during August. Since 2012, the only airlines to cease operating from Heathrow are those that have encountered serious operational issues: bmi was put up for sale and then absorbed by British Airways, Cyprus Airways ceased operations at the beginning of this year and Libyan Airlines has been banned from operating in EU airspace since last December. Cyprus Airways had already moved its London flights to Stansted having sold its last Heathrow slots to American Airlines (for over $30 million!). Despite the scarcity and high price of Heathrow slots, airlines that have found a way into the airport since 2012 include Aeromexico, airBaltic, Avianca and Philippine Airlines, with Vietnam Airlines set to start operations at the end of March from Ho Chi Minh City and Hanoi.

In the last five years, Gatwick Airport has attracted services from some 40 new (or returning) airlines, many more than Heathrow’s 15. Several of these new carriers at Gatwick, underlined in table, have since withdrawn their operations, although there are a great variety of reasons for this which have nothing to do with airline choice between competing London airports, especially the changes and troubles at various airlines ranging from bmi, airberlin, Malév etc. Indeed, the table also indicates that several carriers rebound – Air One, Tunisair, Caribbean Airlines, Adria Airways and many others have all returned; it is understood Qatar Airways may return to Gatwick this summer with a daily flight.

Two (runways) for the money?

It’s pretty obvious to anyone that both airports are clearly running close to maximum capacity and both are highly vulnerable to disruption (such as sudden bad weather or an operational emergency). An additional runway at both airports would considerably help with reliability as well as creating opportunities for significant traffic growth, and benefits to the UK economy of somewhere around a whopping £300 billion ($500 billion). To get this figure we combined the Airport Commission’s estimates of the economic benefit of each runway – a total exceeding £340 billion – and ‘slightly’ discounted the total to account for overlaps – in truth nobody knows what the actual figures are, but it is safe to say the benefits would be an absurdly huge boost to the UK economy and competitiveness, were any political party able to explain it to the electorate.