On 15 January, Copa Airlines celebrated the launch of its only domestic service with the addition of four daily flights between Panama City and David, the capital of the province of Chiriquí that has an estimated population of 144,858 inhabitants.

Covering an area of 75,500 square kilometres (around the size of Czech Republic), Panama is situated on the isthmus connecting North and South America, having a population of 3.6 million people. Famous for the Panama Canal that connects the Atlantic Ocean via the Caribbean Sea to the Pacific Ocean, the country has the largest economy in Central America and it is also classified as having the fastest growing economy and the largest per capita consumer in Central America (according to the Central Intelligence Agency). With an unemployment rate of 2.7%, Panama is the second most competitive economy in Latin America (after Brazil) based on World Economic Forum’s Global Competitiveness Index. Benefitting from this favourable economic climate, the country’s airports have grown their combined annual capacity (measured in CAGR) by 8.1% since anna.aero last looked at this market three years ago.

According to Innovata schedule data for 2015, the Panamanian market is being served by 18 commercial airports, of which Panama City (perhaps better known as Tocumen International Airport) controls 94% of the country’s scheduled seat capacity. For international traffic, this share increases even further (around 99%) and virtually all international flights use Panama City, making it the ultimate gateway to the country. Although further four airports, namely Balboa, Bocas Del Toro, David and Panama City Paitilla, enjoy international flights, none of them exceed a weekly capacity of 1,200 seats. Interestingly, Panama City’s latest international link was introduced on 3 December 2014, when United Airlines commenced daily flights from Denver. This is the Star Alliance member’s third route to the country’s primary gateway, as it already flies from New York Newark (nine times weekly) and Houston Intercontinental (17 times weekly). 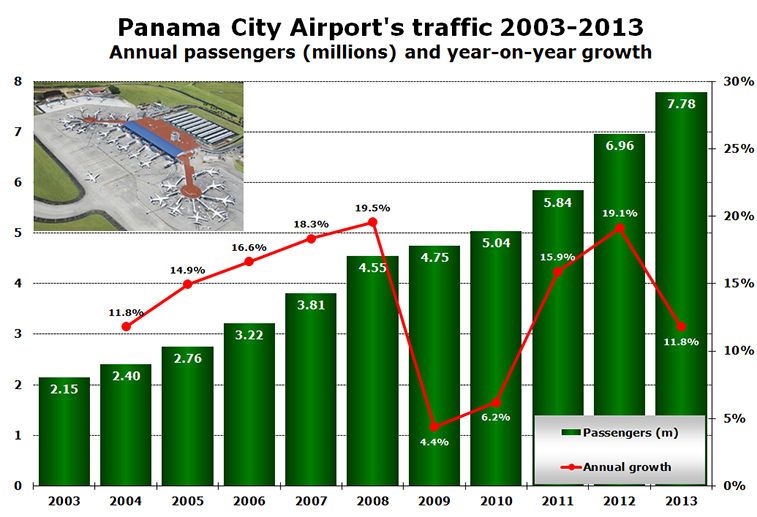 Examination of data facilitated by the Panamanian airport reveals that passenger traffic at Panama City has grown visibly between 2003 and 2013, with an average annual growth rate (CAGR) of 12% over this timeframe. The airport handled around 7.8 million passengers in 2013 (a new record high), a number that increased from the 2.1 recorded 11 years ago. This has largely been driven by the local carrier Copa’s dynamic expansion, which has heavily focused on developing its ‘Hub Americas’ transfer hub between North and South at Panama City. The Star Alliance member makes up almost 85% of the airport’s capacity this January. In addition, when compared to 2012 figures, Panama City’s traffic increased by 12% in 2013.

Copa Airlines controls 81% and 75% of seats and flights

As of January 2015, Panama is served by a total of 19 airlines, with Copa being the dominant player in this country market, as it controls 81% and 75% of seats and flights respectively. The airline, which can trace its roots back to 1947, operates a total of 69 airport pairs, of which only one is a domestic route. Launched on 15 January, the 344-kilometre sector from Panama City to David is operated four times daily, utilising Copa’s E190s. By comparison, San Jose in Costa Rica is Copa’s most frequently served international destination with a combined nine daily flights. This sector is also operated by third-ranked Avianca with thrice-daily flights. 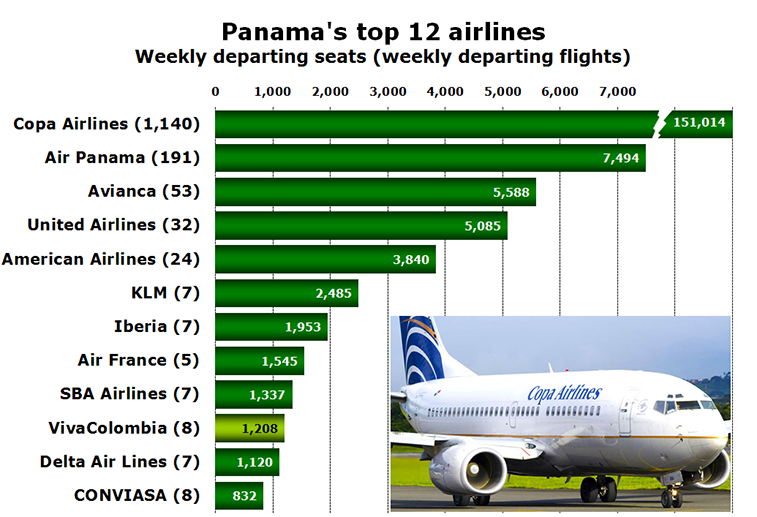 Total weekly seat capacity in Panama has gone up 14%, with six carriers recording growth, when comparing data from this January with the same week last year, while Air Panama, KLM, SBA Airlines, Delta Air Lines and CONVIASA saw their operations unchanged. Panama has seen the arrival of four new airlines in the past 12 months, namely VivaColombia, TAP Portugal, Aruba Airlines and Air Canada, with the former being the only one to make it into this year’s top 12 ranking. As a matter of fact, the Colombian LCC commenced services from both Bogota and Medellin to Balboa on 1 August 2014. As a result of having integrated TACA and LACSA’s operations as part of their merger, Avianca is the fastest growing carrier, with a net increase of 3,738 weekly seats or 202% over the last 12 months. This is followed by Air France, which has increased its weekly capacity by 67% due to the addition of two further weekly departures on the 8,665-kilometre sector from Paris CDG to Panama City. Interestingly, none of the top dozen airlines noted capacity decline this January.

A total of 33 country markets can be reached non-stop from Panama according to Innovata schedule data for this January. At around 37,570 weekly seats and 8.8% more than in the corresponding week last year, the USA tops the list of country markets served, with a combined total of 249 weekly flights operated by American Airlines, Copa, Delta, Spirit Airlines and United from Panama City. Furthermore, the domestic sector (ranking fifth) represents 6.4% of weekly capacity, being served by Air Panama and Copa with a combined 237 weekly departures. 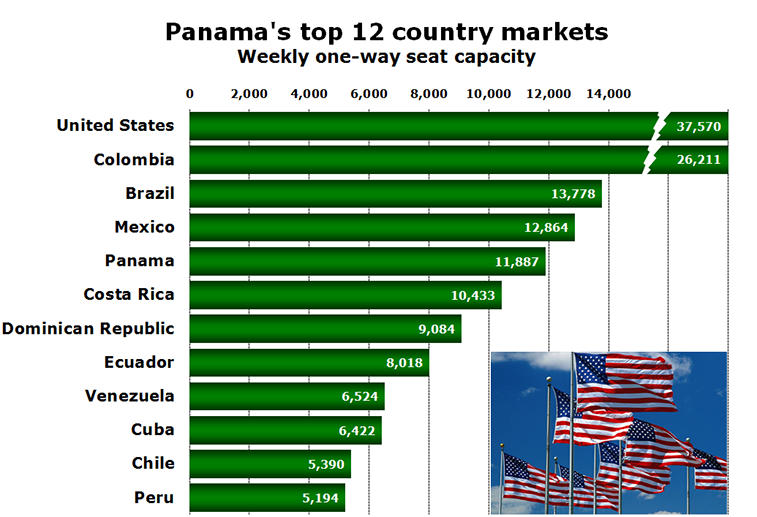 While the domestic sector is the fastest growing country market (+62%), being followed by Costa Rica with an increase of 47% and Brazil with 26%; Venezuela has witnessed the most significant decrease (-27% or 2,433 fewer seats), as a result of Venezolana having withdrawn its six weekly flights between Maracaibo and Panama City, and Copa having decreased its frequency on the Panama City-Caracas sector from thrice-daily to twice-daily. Panama City’s latest international link was introduced on 3 December, when United Airlines commenced daily flights from Denver. Celebrations included a ribbon cutting ceremony at the US gateway. Addressing the audience shortly before the airline’s first departure is Steve Jaquith, MD Denver base, United.