Examination of Innovata schedule data for this January reveals that flights between Australia and New Zealand have experienced a modest increase of 2.8%, with around 445 weekly flights now being operated between the two countries. Total weekly departing seats have grown at a faster rate, having over the last year increased by 3.3%, with ASKs up 2.5% to 225 million this January.

The top 12 city pairs represent over 92% of all weekly seats provided between Australia and New Zealand, which has slightly increased from the 91% recorded for the same week last year. The 2,165-kilometre sector between Sydney and Auckland has managed to maintain its top position in 2015, with weekly seat capacity between the two destinations having increased by 1.5%. A total of seven airlines are serving this city pair this January, the same number recorded in the corresponding week last year. Air New Zealand is the dominant operator serving the route, accounting for over 34% of weekly seats, followed by Qantas (25%) and Emirates (15%). Interestingly, LAN Airlines is also serving this city pair as part of its daily flights from Santiago to Sydney.

Overall, the 2015 ranking is relatively stable with no new entrants in the top dozen since last January, although there have been movers in that time. Notably, the 2,232-kilometre sector from Sydney to Wellington provided 7.1% less weekly capacity this January and dropped one position. 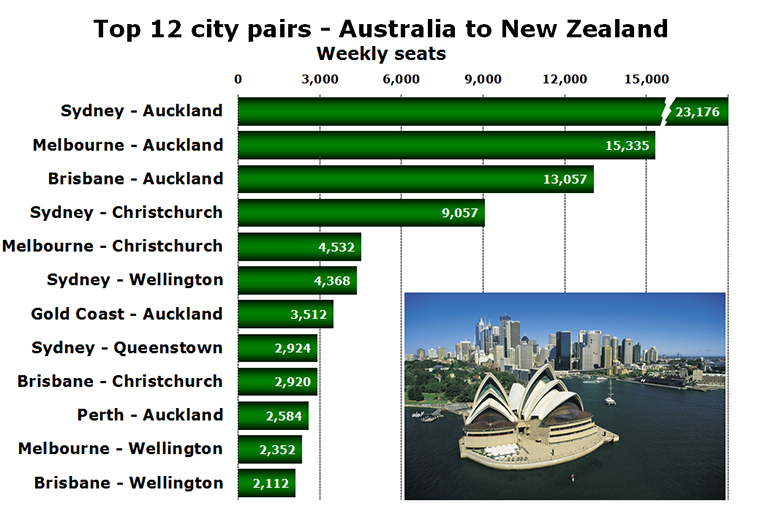 In fact, seven out of the top 12 city pairs experienced growth, when comparing data from this January with the same week last year, while operations between Gold Coast and Auckland remained unchanged. The stand out performance is that emanating from the Sydney–Queenstown city pair, which noted a yearly increase of 41%. This impressive growth was due to Air New Zealand, Qantas and Virgin Australia, all of which have added additional weekly departures on the 1,941-kilometres airport pair. On the other hand, services between Brisbane and Wellington provided the greatest capacity decline (-20%), as a result of Virgin Australia reducing its weekly frequency from 15 times weekly to 12 times weekly.

Australian carriers have 45% of weekly seats

According to Innovata schedule data for week commencing 20 January 2015, seat capacity between the two countries is up 3.3% this winter, following the introduction of a raft of new services that have started in recent months, including Jetstar Airways’ thrice-weekly flights from Gold Coast to Wellington and to Queenstown on 12 and 13 December respectively. A total of three carriers serving this country pair have noted capacity increases, while Emirates and LAN have seen their operations unchanged. The three Australian carriers account for 45% of all weekly seats, which represents the same share as in the corresponding week of 2014. On the other hand, Air New Zealand accounts for 35% of all weekly seats between Australia and New Zealand. 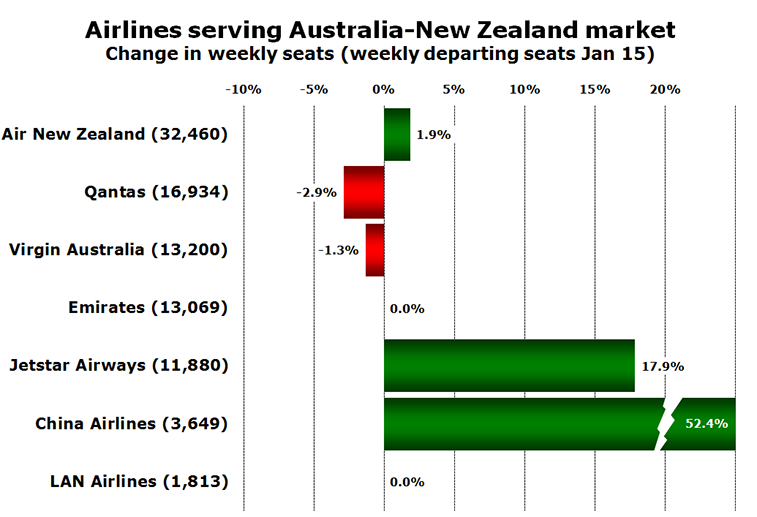 China Airlines, commanding 3.9% of weekly capacity, is the fastest growing operator, with an annual growth in weekly seats of 52%. Contrarily, Qantas posted the greatest capacity decline, as a result of reducing its frequency on the Melbourne-Auckland route from thrice-daily to 17 times weekly. A total of three non-Australian and non-New Zealander airlines are operating in this country pair, namely Emirates, China Airlines, and LAN, with the former linking Brisbane, Melbourne and Sydney to Auckland as well as Sydney to Christchurch.

Sydney dominates with 43% and 42% of seats and flights

Examination of Innovata weekly schedule data for this January reveals that Sydney is the largest Australian destination for New Zealander traffic, with around 43% and 42% of seats and flights respectively. Out of its five New Zealand destinations, Auckland is the most frequently served airport with a combined total of 102 weekly flights from all seven airlines serving this country pair.

Traffic between the two countries is likely to receive a boost in February and March as cricket teams, media and fans of the game moved around between matches in the Cricket World Cup. This event runs from mid-February to the end of March with Australia looking to regain the trophy from holders India.