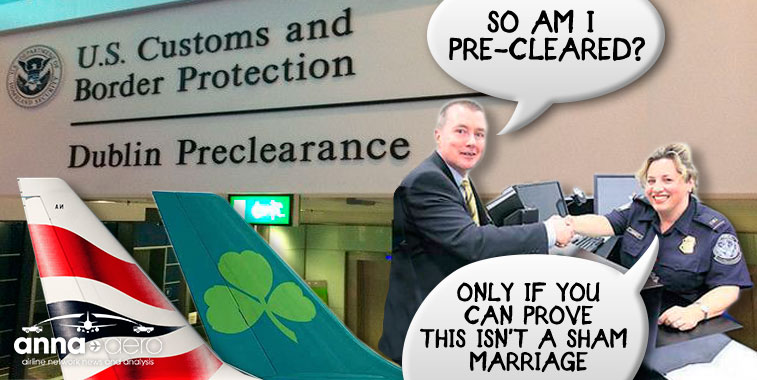 Forget economic reasoning, politically the BA/IAG-Aer Lingus takeover won’t be smooth and BA will have to give up Heathrow slots, although that won’t benefit anyone in Ireland. Ironically, other than the slots, IAG’s obvious desire will be to significantly strengthen Aer Lingus’ transatlantic feed strategy from the UK and Europe – and that would be very good for Ireland! Despite having to change planes, Dublin Airport’s US immigration preclearance is a major selling time-saving point because Aer Lingus’ passengers don’t queue for two hours to meet welcoming Homeland Security officers after arriving in the US. 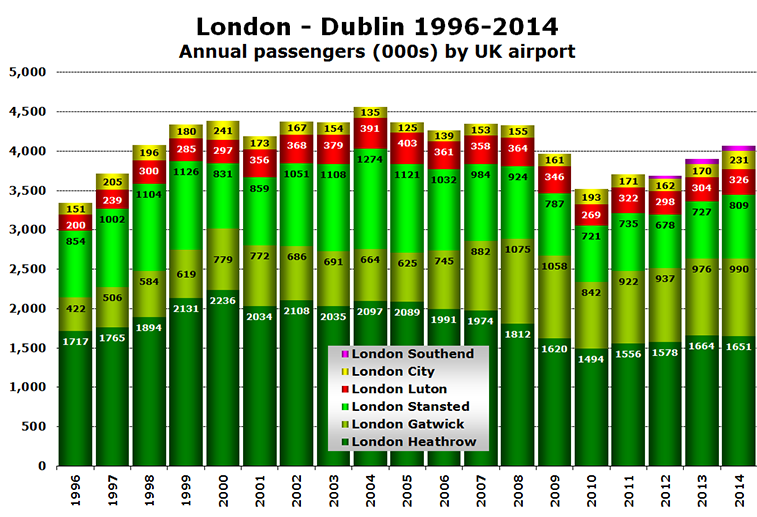 Passenger numbers between London and Dublin peaked in 2004 at just over 4.5 million. Between 2008 and 2010 demand fell by almost 20% (!) when Ireland went into deep recession. However, latest figures from the UK CAA show that since 2012 the market has picked up again, growing by 10%. Last year’s passenger figures of 4.1 million are almost identical to those first achieved as along ago as 1998 (and before the full impact of the Ryanair revolution).

It seems unlikely that regulators would allow, or that a semi-independent Aer Lingus would want, to drop the Heathrow routes and just hand over the slots to British Airways. Aer Lingus is the fourth biggest operator at LHR with 23 departures per day, beaten only by British Airways (around 350), Virgin Atlantic Airways (34) and Lufthansa (25). So acquiring Aer Lingus would increase BA’s share of Heathrow departures (based on last summer’s schedules) from around 52% to just under 56%.

However, that assumes that regulators (such as the EU) would simply approve the takeover without requiring any slots to be given up. That’s unlikely. With 21 daily flights each way between them in summer, the Heathrow-Dublin route would be a monopoly to that one of six London airports. While there is plenty of competition in the London market as a whole, the Heathrow flights are the only services which connect with a true London hub where Dubliners can fly on to all the other places in the world they need to get to. According to schedule data for last summer (September) the Heathrow-Dublin airport pair is the 13th most flown route within Europe with 143 weekly flights each way. The other 12 routes are all domestic (four in Turkey, three in Norway, two each in France and Italy, and one in Germany) making Heathrow-Dublin the most flown international airport pair in Europe. Without speculating on the merits or downside of BA’s dominance (let’s face it they would probably be unconcerned if IAG was anything but an airline), the situation on the Heathrow route will probably be considered politically unacceptable – even though plenty of other airlines in Europe – Air France at Paris, Lufthansa at Frankfurt, KLM at Amsterdam etc – have far greater dominance of their hubs (and no choice of alternative airports).

So, with such competition issues probably requiring external intervention (with unknown consequences), maybe BA’s interest is less in what it might gain at Heathrow…and far more about what it and Aer Lingus can do in Dublin.

In recent years Aer Lingus has again been focussing on exploiting Dublin’s position as an alternative hub to Heathrow for transatlantic passengers (something IAG boss Willie Walsh knows all about as he was Aer Lingus CEO 2001-05). The airline’s traffic statistics for 2014 reveal that while short-haul Aer Lingus Mainline passengers were down 1% to 8.44 million, Aer Lingus Regional passengers were up 18% to 1.31 million, and long-haul passengers (Canada and US) were up 20.6% to 1.32 million. As a result, in terms of RPKs (Revenue Passenger Kilometres) North American operations accounted for 44.7% of Mainline capacity in 2014, up from 39.0% in 2013.

In summer 2014 Aer Lingus offered non-stop flights from Dublin to five US destinations; Boston, Chicago O’Hare, New York JFK, Orlando and San Francisco, as well as Toronto in Canada. San Francisco services resumed in April 2014 after a five-year hiatus, while Toronto flights were launched for the first time in the same month. The importance of the US market at Heathrow should be recognised. Our comparison of Heathrow and Gatwick networks last week revealed that from Heathrow there were more than twice as many seats to the US as any other country in 2014. These transatlantic services are clearly a critical part of BA’s business model; perhaps it can find a way of using Dublin as a secondary hub for North American routes, thereby freeing up some slots at Heathrow for other new services to fast-growing Asian markets. More likely IAG/Aer Lingus will just deepen the model of UK regional-Dublin feed – after all many of these cities (Liverpool, Birmingham etc) have all had their connecting services to Heathrow sacrificed due to slot congestion. Aer Lingus returned to San Francisco on 2 April 2014 after a five-year hiatus. It joined the airline’s existing US services of Boston, Chicago O’Hare, New York JFK and Orlando. BA/IAG/Aer Lingus want to deepen the model of UK-Dublin feed from its 12 non-London UK regional airports – after all many of these cities (Liverpool, Birmingham etc) have all had their connecting services to Heathrow sacrificed due to slot congestion over the years.

To help feed Aer Lingus’ North American services there has been an increased focus on connections to UK regional airports. Since 2011 new UK services from Dublin have been started (or resumed) to Aberdeen, Bournemouth, Bristol, Isle of Man, Newcastle and London Southend.

As a result, last summer, Dublin’s US flights could connect with 12 non-London UK airports (Aberdeen, Birmingham, Blackpool, Bournemouth, Bristol, Cardiff, Edinburgh, Glasgow, Isle of Man, Jersey, Manchester and Newcastle). This compares with just seven UK regional airports that BA serves from Heathrow (Aberdeen, Belfast City, Edinburgh, Glasgow, Leeds Bradford, Manchester and Newcastle). This is an increase of two over summer 2010, since when BA has added service to Belfast City and Leeds Bradford. 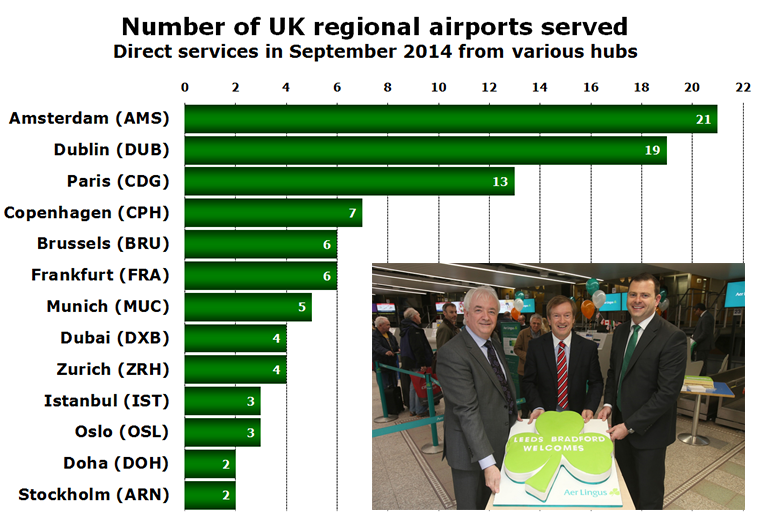 If we consider all airlines (not just the home based carrier) then Dublin was connected last summer to 19 UK regional (non-London) airports, only beaten among hub airports by Amsterdam, which has direct flights to 21 UK regional airports. Next comes Paris CDG with 13 routes followed by Copenhagen with seven and Brussels and Frankfurt with six each.

Four UK regional airports have direct service to Dubai (Birmingham, Glasgow, Manchester, Newcastle) the same number as are connected with SWISS’ main hub in Zurich (Birmingham, Bristol, Jersey, Manchester). Other airports such as Barcelona, Madrid and Rome are connected to several UK regional airports (12 in Barcelona’s case) but these are not natural hubs for passengers to consider except maybe for flights to Latin America via Madrid.

Ryanair and Etihad Airways could profit; but what about the Irish government?

There are growing signs that Aer Lingus’ management believes that the latest offer from British Airways should be recommended to its shareholders which includes the Irish government (25.1%) and Ryanair (29.8%) – or 54.9% of shares between them (which could make for some colourful/interesting meetings and discussions in the days and weeks ahead). Another interested party is Etihad Airways, which currently has a little 4.1% stake in Aer Lingus. Given its challenging involvement in other European carriers (notably airberlin, Alitalia and Darwin Airline), the Abu Dhabi-based carrier will probably be very happy to sell and make a tidy profit – a rare thing in the airline business.