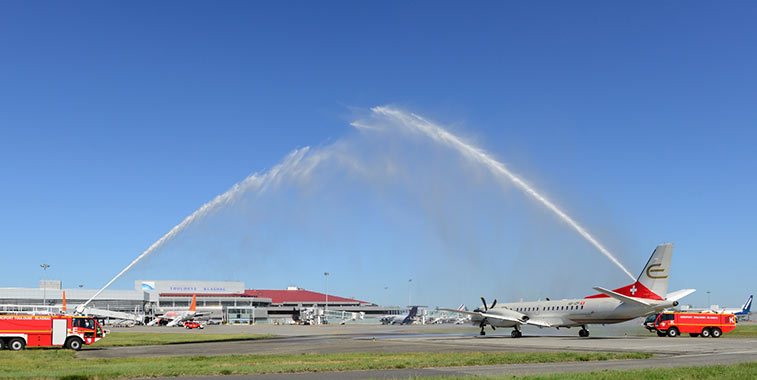 One of four routes that the airline has announced it is terminating from the beginning of February, Etihad Regional began serving the Geneva-Toulouse market on 1 April 2014 initially with just two flights per week. Frequency was increased to four flights per week in May and then increased further to daily flights with the start of the winter season at the end of October 2014. During this period easyJet has been serving the 473-kilometre route (which it launched in December 2009) with between five and six weekly flights.

Last week Darwin Airline (trading as Etihad Regional) announced that it would be restructuring its operations citing a number of issues that have contributed to this decision. In particular the airline complained about aggressive behaviour from the national carrier SWISS and its parent company Lufthansa. As a result Darwin Airline has revealed plans to drop four routes from the beginning of February; Zurich-Lugano, Zurich-Linz, Geneva-Nice and Geneva-Toulouse. Out of curiosity anna.aero decided to take a closer look at these four routes in terms of monthly seat capacity since the beginning of 2014. 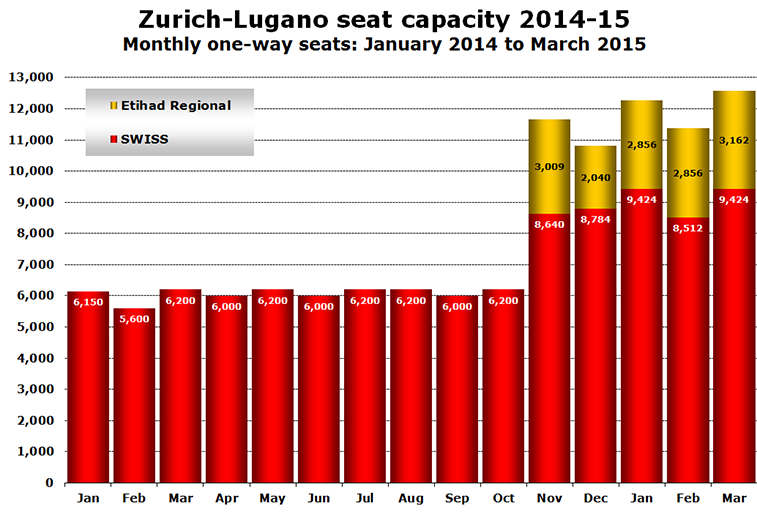 One of the complaints was that SWISS terminated a wet lease agreement with Darwin Airline which had seen Darwin operate on behalf of SWISS for almost 10 years on the Zurich-Lugano route. SWISS replaced the 50-seat Saab 2000 operations of Darwin with 78-seat Q400s of Tyrolean Airways, a wholly-owned subsidiary of Austrian Airlines which, of course, is another Lufthansa subsidiary. However, Darwin chose to start its own double-daily service on the 1 November resulting in a doubling of seat capacity, a situation that was never going to be sustainable given that neither carrier was likely to stimulate the market massively with low fares.

The 430-kilometre Zurich-Linz route has in the past been served by Robin Hood Aviation (with up to two flights per day using Saab 340s), but this ended when the airline ceased operations in August 2011. The route had remained unserved for almost three years until June 2014 when Etihad Regional started operating daily flights with its Saab 2000s. 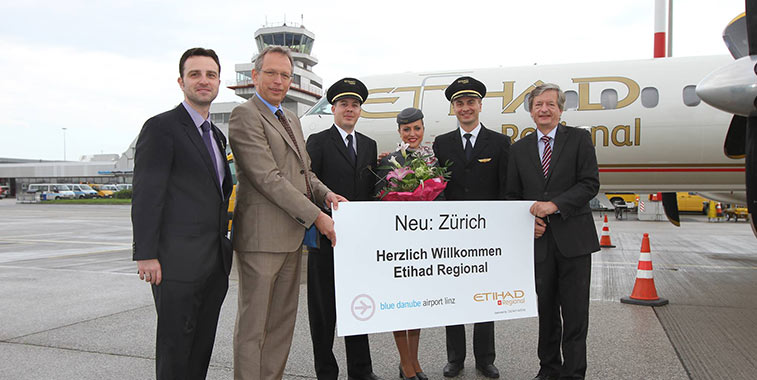 Etihad Regional began services linking Zurich and Linz on 1 June 2014. The daily flight was operated by the airline’s Saab 2000s and was the first air link between the two cities since Robin Hood Aviation ceased operations in August 2011.

Taking on easyJet on Geneva-Toulouse

Etihad Regional began connecting Geneva and Toulouse on 1 April 2014 with twice-weekly flights, before increasing to four weekly flights in May and daily flights for the start of the winter season at the end of October. This route was already being served by easyJet (since December 2009) with between five and six weekly flights. easyJet did not noticeably respond in terms of seat capacity. Etihad Regional’s entry added between 20% and 30% more seats into the market depending on the month. 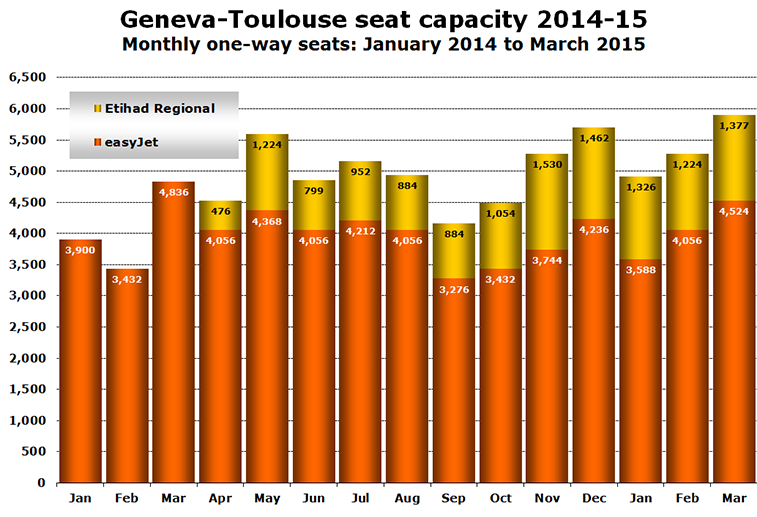 Taking on easyJet and SWISS on Geneva-Nice

Etihad Regional’s decision to enter the Geneva-Nice market on 7 July with thrice-weekly flights using a mix of Saab 2000s and ATR 72s is one of the harder to understand, given that both easyJet (with up to four daily flights) and SWISS (with twice-daily flights) were already well established in the market and both operating with jet aircraft on this short 299-kilometre route. Etihad Regional’s additional seat capacity represented around 3% of the route’s seat capacity in summer, rising to 6% this winter. Given the competition in the market it is hard to see what sort of passenger Etihad Regional was hoping to attract in this market. 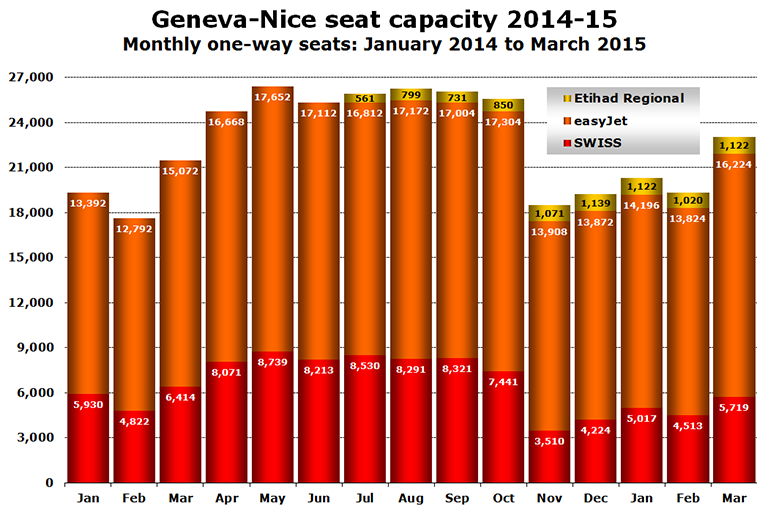 SWISS competition on Geneva routes set to grow this summer

Another point in the airline’s press release about the aggressive behaviour of SWISS and Lufthansa was: “Launching services on Darwin Airline routes, many previously not operated by SWISS”. The only example that anna.aero’s data elves have found of SWISS starting a new route in 2014 that was already served by Darwin was the Geneva-Rome route which the airline introduced on 11 April 2014. However, SWISS has announced plans to start serving this summer the Darwin destinations of Calvi, Florence, Lugano and Valencia. All of these route will be operated on behalf of SWISS by Tyrolean Airways’ Q400s.

Based on analysis of schedule data for September 2014, SWISS was competing directly with Darwin on just four of its 19 routes from Geneva; Belgrade, Rome, Nice and Zurich. SWISS’ strategy at Geneva seems, until recently, to have been aimed for more at ‘defending its patch’ against easyJet (who have a base there), than attacking Darwin. At Zurich there was competition from SWISS on four out of 10 routes; Düsseldorf, Florence, Geneva and Lyon. According to anna.aero’s New Route Database SWISS has launched 16 new destinations from Geneva since May 2013 to the end of 2014. Of these only Belgrade (launched 19 December 2013) and Rome Fiumicino (launched 11 April 2014) are destinations served by Darwin Airline last summer. Darwin began its Belgrade service on 1 May 2014 (after SWISS) while the Rome service has been part of the airline’s network for many years.