In December 2012, GOL announced its first US services, to Miami and Orlando, which are operated via Santo Domingo in the Dominican Republic. These two routes are still flown daily this January via the Caribbean airport as a connector between Sao Paulo Guarulhos as well as Rio de Janeiro Galeao and the two US destinations.

Established in 2000 the GOL started operations on 15 January 2001 with a flight from Brasilia to Sao Paulo Guarulhos. Since then it has expanded considerably, offering services to a total of 70 destinations in 11 countries in North America, the Caribbean and South America this January. With nearly 37% of weekly seat capacity (according to Innovata schedule data for week commencing 20 January 2015), GOL has established itself as the largest operator in Brazil, above TAM Airlines (30%) and Azul Airlines (19%). With a fleet of 139 737 units (comprising 34 -700s and 105 -800s), GOL is now offering more than 1.1 million seats per week. This is more than when anna.aero last looked at this carrier three years ago.

Examination of GOL’s passenger statistics indicates that the airline handled around 35 million passengers in 2013, representing a decrease of 7.3% over 2012 figures. In the first 11 months of 2014, for which traffic data is already available, the carrier posted an increase of 10% when compared to the corresponding period of the previous year, with 36 million passengers achieved until end-November. If the airline continued on this growth trajectory, it would have set a new record close to 39 million passengers in 2014, based on anna.aero’s forecast. In addition, the load factor for the first 11 months of 2014 grew by 7.4% to 77%.

Guarulhos accounts for 13% of weekly departures

Examination of GOL’s current network for this January reveals that the carrier serves a total of 70 airports, of which 55 are in Brazil. In fact, the airline’s top dozen airports account for 72% of total flights this month, which is down 1% from last year’s figures. Not surprisingly, Sao Paulo Guarulhos is by far the airline’s busiest airport by weekly departures (13%), posting 1.5% growth or an increase of 12 weekly flights this January when compared to data from the same period last year. The primary gateway to the most populous city in Brazil is connected to 42 destinations, of which the 344-kilometre sector to Rio de Janeiro Santos Dumont is the LCC’s most frequently served airport pair from Guarulhos, with 61 weekly departures. Ranking second in terms of weekly flights, Sao Paulo Congonhas is connected to 22 destinations. 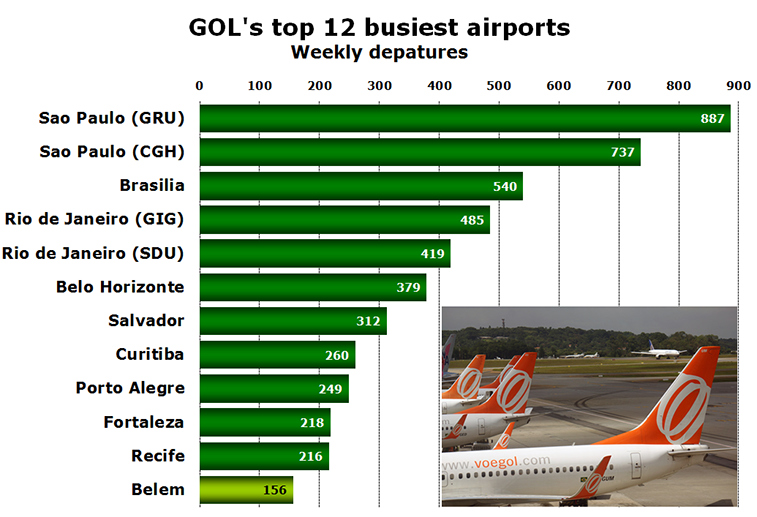 GOL’s weekly flights are up 3.3% this January when compared to data from the same week last year, with nine of the top dozen airports growing, while operations at Belo Horizonte remained unchanged. Thus, the stand out performance is that emanating from operations at Belem, which is also a new entrant in this year’s ranking, having increased by 14% or 19 weekly flights over the last 12 months. The carrier has significantly expanded at Belem, with the addition of thrice-weekly flights to Altamira and four weekly services to Parauapebas, while it has also increased the frequency on a number of other airport pairs. By comparison, Congonhas witnessed the greatest decline, as GOL has trimmed 2% of its weekly departures at the airport.

Domestic market accounts for 97% of seats

Despite serving a total of 11 country markets, GOL is focussed predominately on the domestic sector, with 97% of its seats in January having an origin or destination there. Internationally, neighbouring Argentina is the largest country market, accounting for a more modest 1.2% share of weekly seats and being served with a combined 75 weekly flights to Buenos Aires Aeroparque, Buenos Aires Ezeiza, Cordoba as well as Rosario. 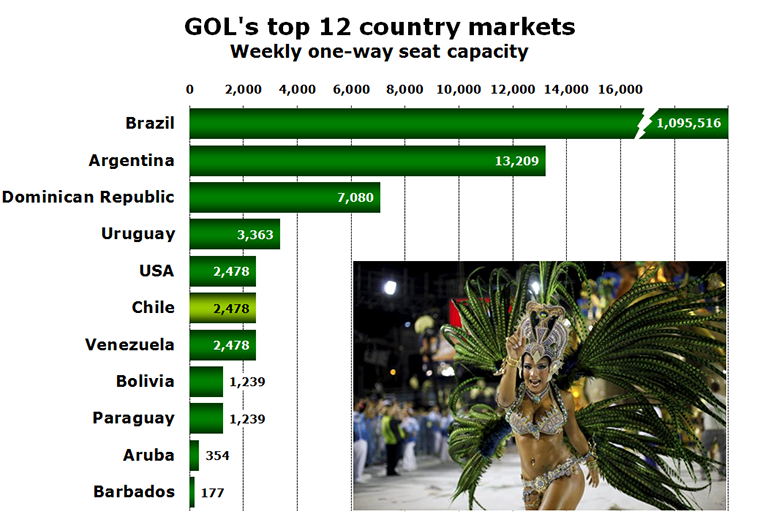 A new entrant into this year’s ranking is that of #6 country market, Chile, due to the LCC adding twice-daily flights on the 2,617-kilometre sector to Santiago on 3 July 2014. Interestingly, the USA is served by GOL’s daily flights to Orlando and Miami operated via Santo Domingo in the Dominican Republic as of December 2012.

Congonhas-Santos Dumont is #1 route by seats

According to Innovata schedule data for this January, the carrier operates a total of 212 non-stop routes. Regarding its most significant services, the top 12 airport pairs account for 12% of all weekly seats, with Congonhas-Santos Dumont maintaining its top position in 2014, even though GOL reduced its weekly capacity by 13% on the 367-kilometre route. 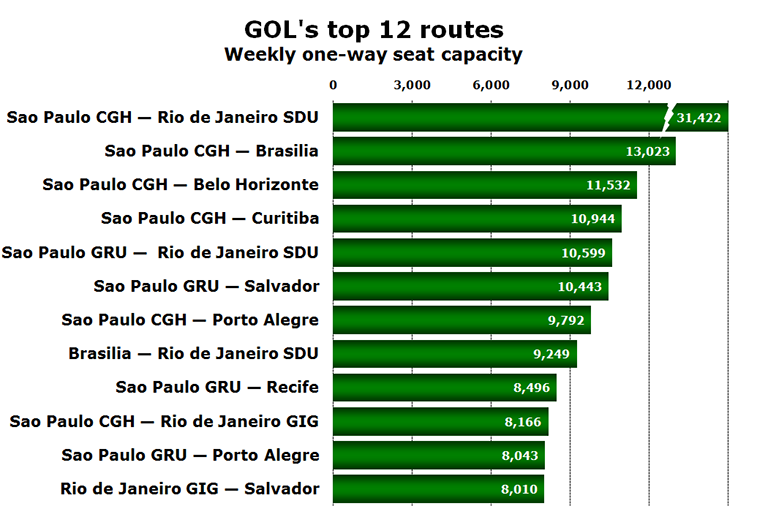 Looking at weekly seat capacity data for this January, the airline posted 1% growth when compared to data from the corresponding week of 2014. Surprisingly, the links from Guarulhos to Recife as well as from Rio de Janeiro Galeao to Salvador are the only airport pairs that noted capacity increase (+11% and +9% respectively).