One of Ryanair’s six routes that were launched to Rabat over the past two years is the 1,207-kilometre sector from Girona in Spain, which was introduced on 7 November 2013. Luis Sala Montero, Airport Director of Girona (left) and Ryanair flight crew welcomed passengers of the inaugural flight to Rabat in Morocco, which will operate thrice-weekly, with a commemorative cake.

Located in the city of Sale and also serving its sister town Rabat – the capital of Morocco, Rabat Airport is currently classified as the country’s sixth busiest airport according to anna.aero’s European Airport Traffic Trends database, behind Tangier, but above Nador. Under the operational control of the Moroccan Airports Authority (ONDA), Rabat offers 11 non-stop services flown to six country markets within Europe and North Africa, according to Innovata schedule data for this January. 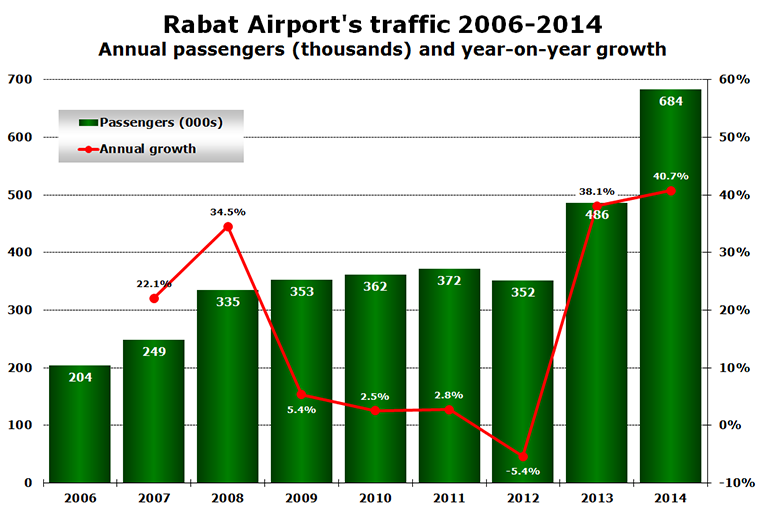 Examination of data facilitated by the Moroccan airport reveals that passenger traffic at Rabat has grown visibly between 2007 and 2014, with an average annual growth rate (CAGR) of 13.5% over this timeframe. The airport handled around 684,000 passengers in 2014 (a new record high), a number that increased from the 249,000 recorded seven years ago. Furthermore, when compared to 2013 figures, Rabat’s traffic increased by an impressive 41% last year. Overall, the airport’s passenger numbers experienced growth every year, with the exception of 2012, when a decline of 5.4% was noted, due in part to the political instability caused by a series of demonstrations across the country. In addition, the arrival of Ryanair in 2013, had a major impact on traffic flows to and from the airport, resulting in massive increases in passenger numbers in both 2013 and 2014.

Moreover, entering Rabat’s monthly passenger data for 2014 into anna.aero’s Seasonal Variation in Demand (SVID) calculator, the airport performs exceptionally well, producing a score of 1.98, an “excellent rating”. To give Rabat a fair evaluation, we also ran calculations on Casablanca (2.46 – good) and Marrakech (1.63 – excellent). Against its airport peers from the country, the airport performs better than the significantly larger Casablanca (eight million passengers), but worse than Morocco’s second busiest gateway at Marrakech (four million).

Ryanair dominates with 42% and 35% of seats and flights

Evaluation of Innovata schedule data for this January indicates that a total of four scheduled airlines are serving Rabat, with Ryanair being the clear market leader. The largest European carrier according to passengers handled last year, accounts for 42% and 35% of all weekly seats and flights respectively and operates a total of six airport pairs from Rabat, of which Paris Beauvais and Madrid are the most frequently served destinations, each being served with four weekly departures. Controlling 23% of seats at the airport, Air France – ranking second – links Rabat to Paris CDG with twice-daily operations. 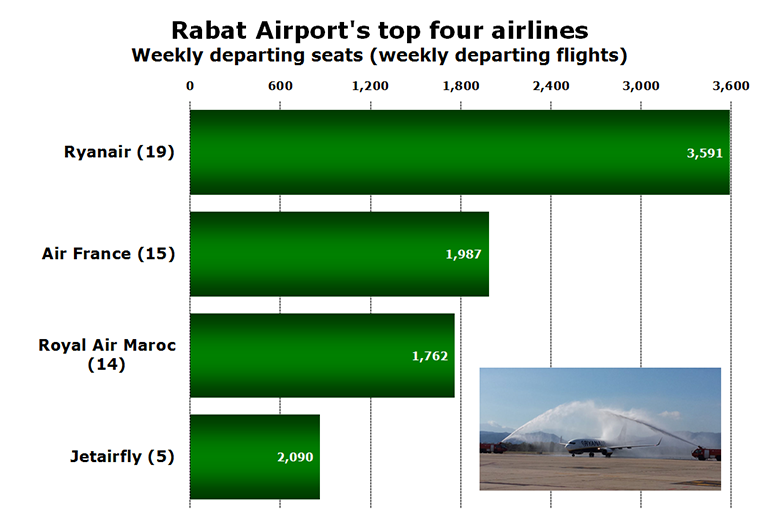 Weekly seat capacity for this January has gone up 19% (when compared to the same week last year), with three of the four carriers recording capacity growth, while Ryanair saw its operations unchanged. Jetairfly is the fastest growing carrier at Rabat with an annual increase in weekly seats of 128%, coming as a result of commencing weekly flights from Brussels on 16 May 2014. In fact, the Belgian carrier is now operating the 2,082-kilometre sector with twice-weekly departures. All in all, no airline posted capacity declines this January.

Analysis of anna.aero’s New Route Database reveals that Rabat has witnessed the addition of eight new routes starting from January 2013. Ryanair, the main driver of growth at the airport, launched a total of six links from France, Belgium, Spain and the UK. Notably, the average weekly frequency across Ryanair’s routes is 3.2. A new carrier to the airport this summer will be Vueling. The Spanish LCC will operate twice-weekly flights from Barcelona between 20 June and 12 September