Denver International Airport (DIA) now has non-stop flights to around 20 international destinations. The most recent of these to launch was Panama City in Panama. United Airlines began daily flights on this 4,234-kilometre route on 3 December 2014. United remains the leading airline at DIA though its share of seat capacity at the airport has fallen significantly since the late 90s as Frontier Airlines, and more recently Southwest Airlines, have expanded their networks from the airport.

The state of Colorado is the eighth largest in the US (about the size of South Korea) and is home to over five million people. The urban area around Denver, the state capital, accounts for around half of the population, and is home to the state’s major aviation hub, Denver International Airport (DIA). In 2013 DIA ranked as the fifth busiest airport in the US (and 15th globally) with 52.6 million passengers. Based on data for the first 11 months of 2014 anna.aero forecasts that DIA handled a record 53.3 million passengers last year, beating the previous record of 53.1 million set in 2012. 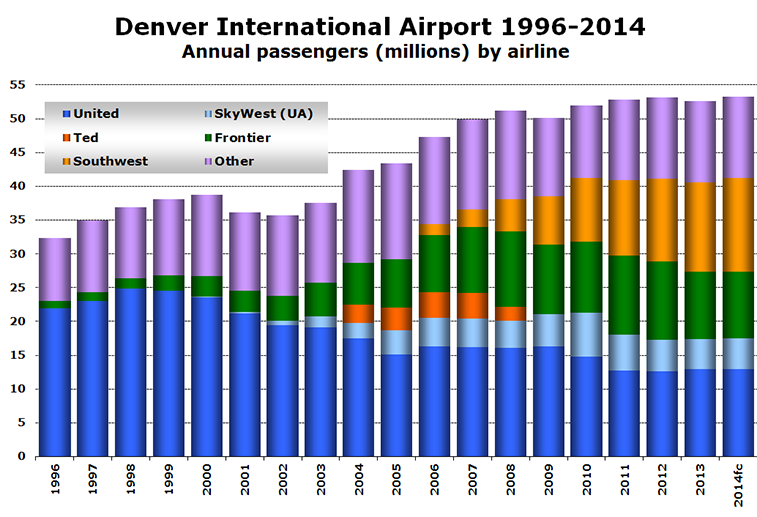 Three carriers have major operations at the airport; United Airlines, Frontier Airlines and Southwest Airlines. In 1998 United accounted for two-thirds of the airport’s traffic, with locally-based carrier Frontier having just 4% of the market. Southwest would not start operations at the airport for another eight years. In 2014 United’s (mainline) share has fallen to one-third, Southwest has just over a quarter of the market, while Frontier’s share is just under 20% and declining, as it reinvents itself as a ULCC (Ultra Low Cost Carrier).

Apart from its own aircraft and those of major capacity provider SkyWest Airlines, United also used ExpressJet, GoJet, Republic and Shuttle America to provide capacity for its marketed flights in Denver in 2014. These four airlines carried an estimated 4.2 million passengers on United flights last year, but are included under “Other” in the above chart.

Based on the number of weekly departures currently scheduled for June of 2015 the best served destinations from Denver are Seattle-Tacoma, Los Angeles, Phoenix, Salt Lake City and Dallas/Fort Worth, all of which have more than 20 daily flights. United and Frontier both serve all 12 of the top 12 markets, while Southwest competes directly on nine of them, and serves alternative airports in the other three; Love Field (Dallas), Midway (Chicago) and Hobby (Houston). 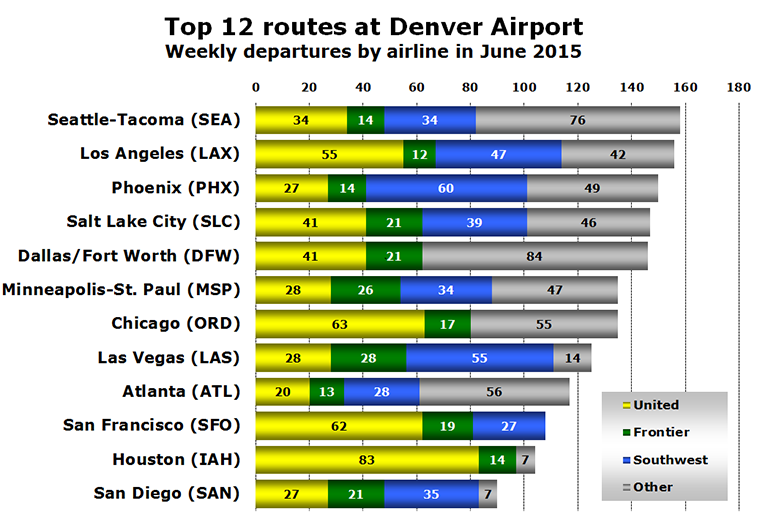 According to available schedule data for June 2015 a total of 166 destinations will be served non-stop from DIA this June, including 19 outside of the US. Of the international destinations seven are in Mexico and a further five are in Canada. Beyond the Americas, DIA has non-stop daily flights to Frankfurt (Lufthansa), London Heathrow (British Airways) and Reykjavik (Icelandair) in Europe, as well as Tokyo Narita, currently the airport’s only non-stop destination in Asia, operated by United Airlines with its 787-8s.

A summary of the new services launched by carriers from DIA since the beginning of 2014 (and those planned for introduction in the next few months) is provided in the table below.

The impact of Spirit Airlines’ recent arrival on the Denver-San Diego route was covered in more detail in a recent farewatch analysis. The same airline plans to start services to Los Angeles in mid-April and will be competing directly against American Airlines, Frontier Airlines, Southwest Airlines and United Airlines.

Frontier’s changing business model means that it is cutting capacity by around one-third at DIA and has already dropped over 20 destinations from its network, though around half of these are still operated by other carriers. The airport is working hard to ‘backfill’ these routes with other carriers, so it seems likely that additional routes will be announced in the coming months. However, overall passenger numbers are expected to fall slightly in 2015. 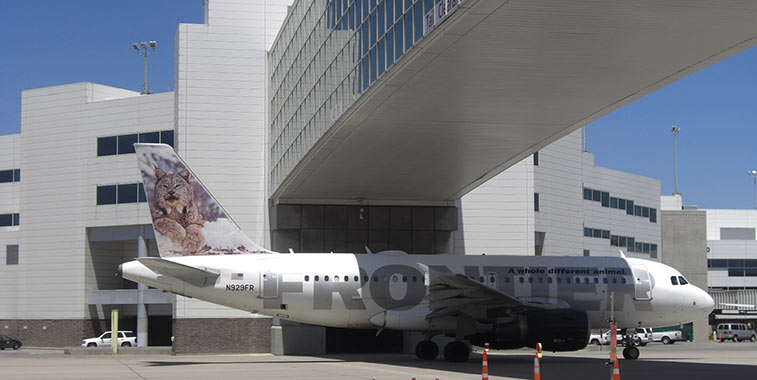 Larry the Lynx adorns the tail of one of Frontier’s A319s taxiing at Denver International Airport. Frontier is cutting its capacity by around one-third at the airport, resulting in the loss of 11 markets from the airport, which the airport is working hard to backfill. However, 2015 passenger numbers are likely to be down on the record figure achieved in 2014.

12 other airports in Colorado with scheduled services in 2014

While Denver is the dominant airport in Colorado, Innovata schedule data for 2014 reveals a further 12 airports with scheduled services. These are dominated by Colorado Springs, which is around 120 kilometres south of Denver. Despite their close proximity the two airports are connected by over 50 weekly flights operated by United Airlines to help feed its hub in Denver. 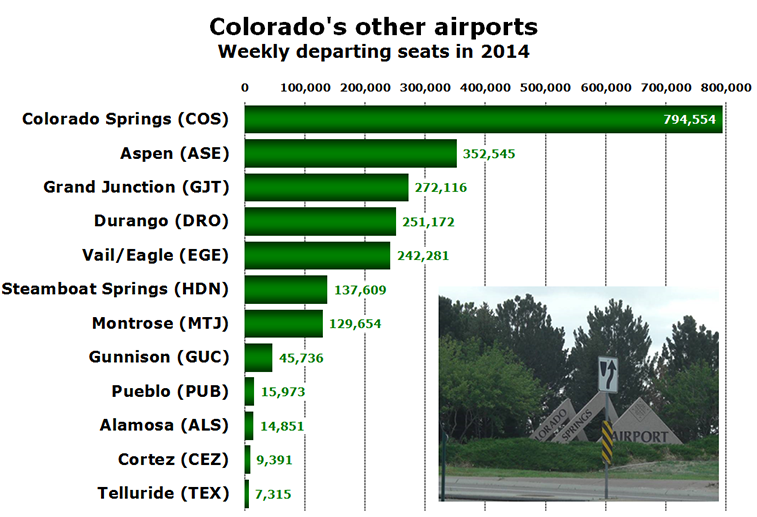 Some of these airports are actually far busier during the winter months when they serve as more convenient gateways than Denver to specific ski resorts. In particular Aspen and Eagle/Vail airports have significantly more services during the winter season. In December 2013 Air Canada introduced weekly flights to Eagle/Vail Airport in Colorado from Toronto. The seasonal service (it ended on 5 April 2014) resumed operations on 31 January 2015.