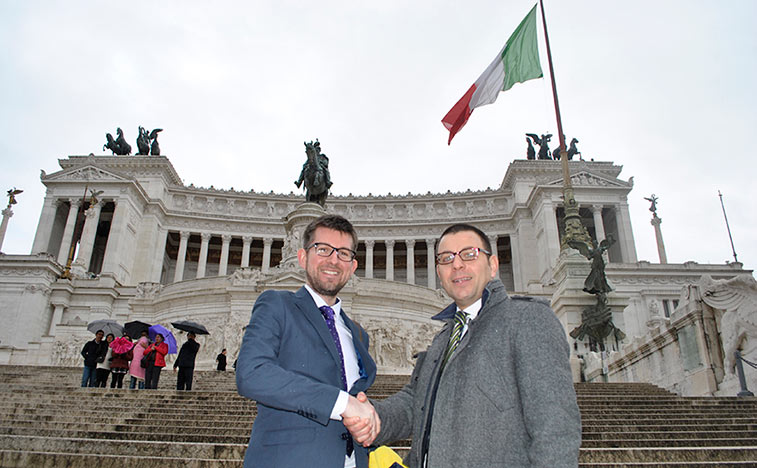 Raffaele Pasquini: This is true, in 2014 we had incredible numbers from a traffic point of view. The main goal has been to have Vueling establishing at Fiumicino their second European hub, after Barcelona. In the last year, Vueling has based a huge number of aircraft at Fiumicino and the very interesting story is that this year they will go forward, so the number of based aircraft will increase and the frequencies/destinations in summer season 2015 will increase. As for long-haul, Emirates launched a third daily service at the end of 2014 and we will see the results of that this year. The same for the recent new Air India flight to New Delhi and the Etihad’s daily operation to Abu Dhabi: Operations launched in 2014, whose main result will come up in 2015. Then, I’m very positive in saying that in a very short time we will announce something new from China. So we are on the way to make 2015 even better.

aa: It looks like Vueling is losing the domestic battle against Ryanair. Are you managing to maintain the Spanish LCC’s capacity at the airport?

RP: Vueling has a lot of new routes out of Rome, so we don’t think its focus is changing. They’re concentrating on Fiumicino, so while they may drop off some of the routes, for sure they will introduce a lot of new routes; the balance is very, very positive.

aa: Do you ever envisage Ryanair feeding Alitalia’s hub… as MOL keeps insisting?

RP: Well, Ryanair is doing a good job and is increasing the number of frequencies out of Fiumicino too. That doesn’t mean that it is decreasing Ciampino services: Ciampino is simply very full, what they fly out of Fiumicino is something new.

aa: What white spots remain on your network map?

RP: We are working a lot on China. We are also looking a lot at Japan and Korea. We are continuing for sure at Central and South America, and last but not least, we have always in mind our top markets of the US and Canada. So I don’t want to miss the point that US is always our first long-haul market in terms of volume, and we are doing more: new United flights will come this summer from Chicago O’Hare to Rome, so this is great news!

aa: Your peak traffic (in August) is almost double what your low season traffic is (in February)… does this create operational issues… and how are you intending to resolve this seasonality?

RP: This is a point, we are actively work on this. It’s true that we have an interesting peak in the summer season – Rome being one of the top touristic spots worldwide. But, I would say, we have a lot of global connected markets characterised by ‘against-seasonal’ flows. We are always working to have year-round flights – it’s not always possible, but this is our aim.

aa: Has there been a blurring of the role of CIA in serving Rome with lots of LCC capacity arriving at FCO?

RP: No, no. We see Ciampino continuing in having a fundamental role in the future. Ciampino reached five million passengers last year and, as you may know, the airport is capped by law in term of movements, so this is realistically its top limit. We believe Ryanair, which is the main operator there, will remain focused on that airport, while if the want to grow they’ll increase their presence in both Roman airports.

RP: We had 26% of connecting traffic in 2014. Alitalia by itself, operating as hub-carrier at FCO, has more than 50% of its traffic connecting at the airport. Fiumicino being connected with all domestic/Mediterranean destinations, giving as the role of main gateway for this area, we do have a lot of connecting traffic coming to/from domestic, feeding long-haul flights. Let me underline that Alitalia is doing the main role in feeding the airport. But it is not the only one. Even Vueling is feeding itself, so you can now fly Catania-Rome-Prague, for example, with Vueling.

aa: Is there any focus on developing connecting traffic? What is the MCT (Minimum Connect Time)? What impact on Alitalia’s network do they thank Etihad’s ownership will have?

RP: We have a 45-minute Minimum Connect Time for domestic-domestic or international-international, and 60 minutes for domestic-international. It’s pretty good, and for enhancing the travel experience for such passengers, we have just published a special ‘transit guide’ on our website.

Alitalia and Etihad are two important airlines; they represent more than 40% of our traffic. It could be that Alitalia will decide to focus on its historical markets, North and South America, while Etihad will cover the eastern part of the world. Nevertheless, there are some very huge markets in the Far East that we believe could be covered even directly by Alitalia out of Rome.