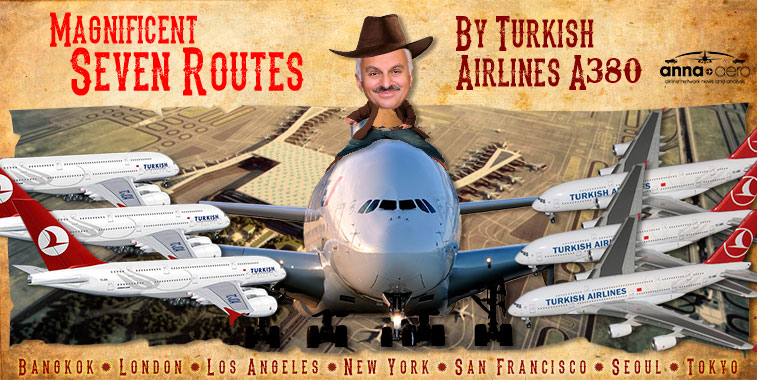 The seven routes where anna.aero believes Turkish Airlines would use A380s. All of these destinations currently handle A380s from various airlines, although Istanbul itself does not. However, with a new mega-airport scheduled to open on Republic Day in October 2017, that should not prove an obstacle…

In recent weeks Turkish Airlines is (once again) enjoying reports that it is considering placing an order for the world’s largest commercial aircraft, the Airbus A380. At the end of December Turkish Airlines’ fleet comprised 261 aircraft, an increase of 28 over the previous December. Of these 55 were widebody aircraft (up from 42 a year previously) comprising 16 A330-200s, 18 A330-300s, five A340-300s and 16 777-300ERs. According to the airline’s latest presentation, the widebody fleet is expected to grow to 79 aircraft by the end of 2016 as it takes delivery of a further 12 more A330-300s and 13 777s, although there is no further announced growth for the following five years, despite the opening of the Istanbul New Airport mega-hub in 2017. Maybe this lull in widebody growth is because it expects to take delivery of A380s from 2017 onwards.

Where would Turkish Airlines use its A380s?

In the history of the A380, none of the 13 airlines operating the type have ever used it to launch a new route. Its role has been to add capacity at a lower unit seat-cost on existing, primarily long-haul routes, often into airports where there are slot constraints. So to predict where Turkish Airlines might use any A380s it acquires it is probably best to look at the airline’s existing network. Ranking the top 15 routes from the airline’s base at Istanbul Atatürk airport by ASKs (Available Seat Kilometres) takes into account not just seat capacity but also sector length. Based on this metric the airline’s top 15 routes are led by New York JFK, which is a long route, served with three daily flights. 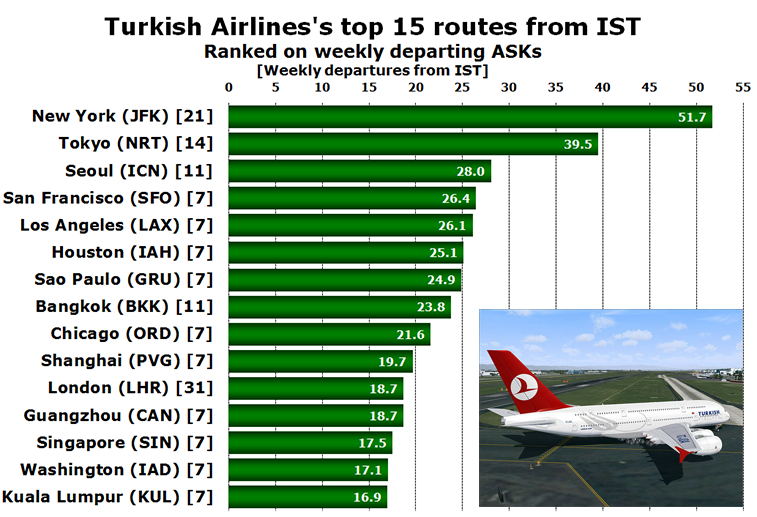 The airports in this list would appear to be the best candidates for A380 service. All the routes with the exception of London Heathrow (at 2,500 kilometres), are between 7,500 and 11,000 kilometres in length. This suggests that for Turkish Airlines the average sector length for any A380 operations might be around 9,000 kilometres. Currently the shortest sector flown by an A380 is from Dubai to Kuwait (just 853 kilometres) with Emirates, while the longest is Qantas’ Sydney to Dallas/Fort Worth service, at 13,790 kilometres.

According to Airbus, as of the end of 2014 there were 152 A380s operating with 13 airlines. Emirates has a breath-taking 57 of them, with Singapore Airlines next with 19. Seven airlines currently operate between six and 12 of the type. anna.aero decided to look at how many flights per week each carrier was getting from its A380s. Clearly this will be a function of average sector length, so both of these figures were calculated based on current schedule data and plotted on an x-y graph. A trendline was added which shows that, not surprisingly, the longer the average sector length the fewer the number of sectors that are typically flown in a week.

Average sector length varies from just over 5,000 kilometres for Qatar Airways, to well over 10,000 kilometres from Korean Air, Malaysia Airlines and Qantas. Most of the airlines lie fairly close to this trendline with the notable exception of Air France, which would appear to be operating around two fewer flights per week than it should be, given the average sector length of its A380 operations. 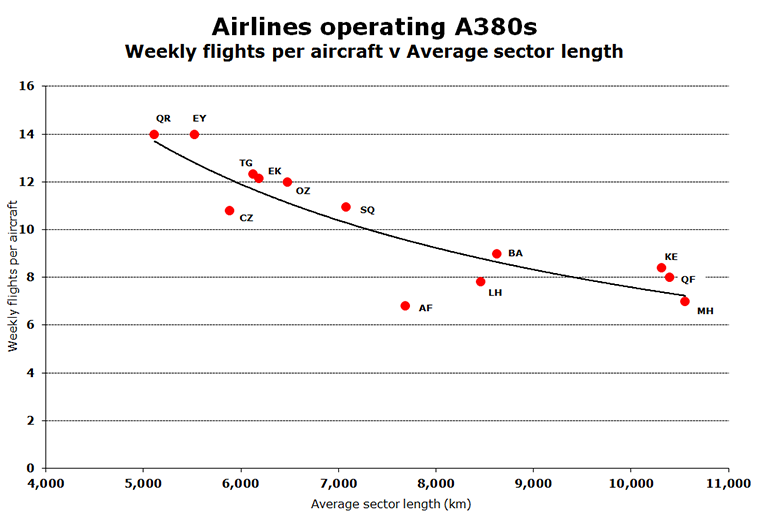 If Turkish Airlines’ A380 operations had an average sector length of around 9,000 kilometres it might expect to operate around nine weekly departures with each aircraft. That would equate to 45 return flights per week if it had the 10 suggested aircraft. Looking at other carriers, none of them operate the A380 on more routes than they have aircraft. Emirates flies to 35 destinations with its 57 aircraft, Singapore Airlines to 14 with its 19. Among European-based A380 operators Lufthansa operates seven routes with its 12 aircraft, Air France seven with its 10 aircraft, and British Airways five with its eight A380s.

So even if Turkish Airlines ordered 10 aircraft it might be looking at operating them from no more than seven airports on a daily basis. Under this scenario anna.aero would predict Bangkok, London, Los Angeles, New York, San Francisco, Seoul and Tokyo as the ‘magnificent seven’ routes. All of these airports currently handle A380s from various airlines, although Istanbul itself does not. However, with a new mega-airport scheduled to open on Republic Day in October 2017, that should not prove an obstacle.