Last April, Hawaiian Airlines became the latest US carrier to serve the Chinese market with direct flights when it began thrice-weekly operations between Honolulu and Beijing using its A330-200s. International traffic is booming in China at present, with seat capacity up 15% this March. The US market is growing by 21%. Impressive, but not as good as South Korea (+31.5%) and Thailand (+45.9%).

Despite some concern about a slowdown in the rate of growth of the Chinese economy, China’s airlines appear to be seeing little reduction in their rate of growth. Figures from the Civil Aviation Administration of China (CAAC) reveal that in the first 11 months of 2014 domestic passenger numbers were up 9.7% to 330.9 million. The corresponding growth rate the previous November was 10.8%. However, international traffic is growing much faster in 2014, with cumulative growth of 18.0% across the first 11 months of last year. The corresponding growth rate the previous November was 13.3%. In October and November international traffic growth exceeded 25% for the first time since January 2011, as Chinese carriers start to look increasingly at international markets for growth. 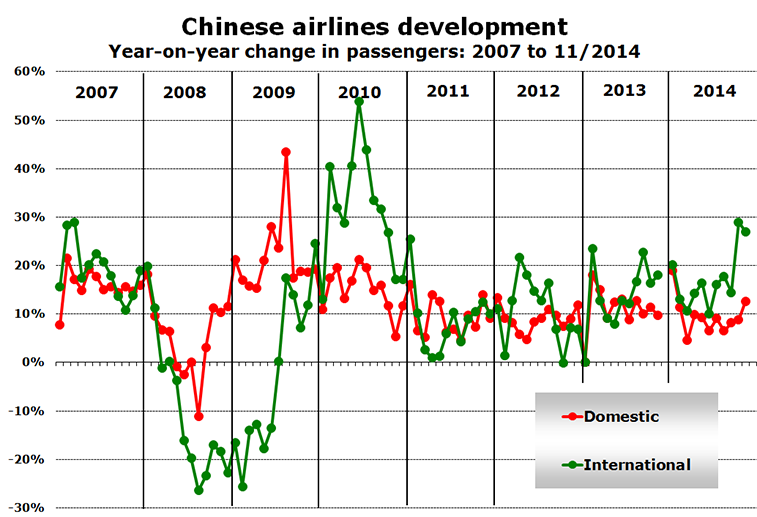 Analysis of Innovata / Diio Mi schedule data for March 2015 and March 2014 reveals that international seat capacity across all airlines serving Chinese airports is up 14.9%. March was chosen as the month for analysis as the Chinese New Year is in February this year, which may distort the underlying trends. All of the top 15 airlines have increased their international capacity to and from China during the last 12 months with the country’s three biggest carriers all growing their capacity by between 17% and 21%, above the overall average. 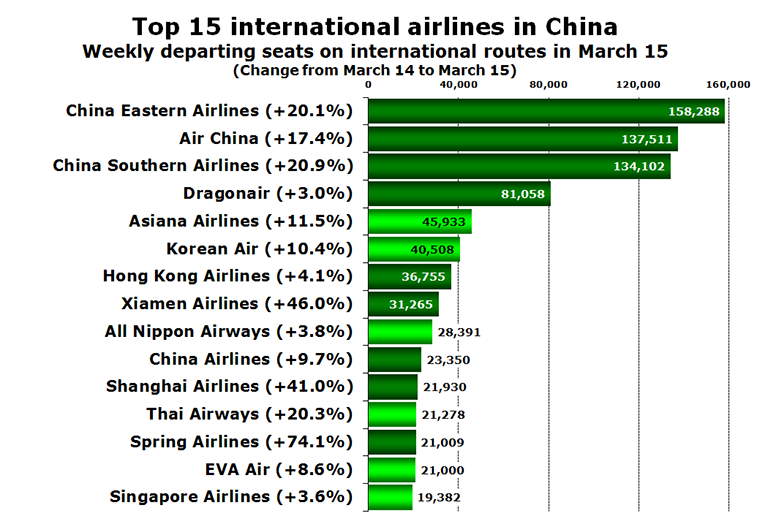 Carriers not based in China, Hong Kong or Taiwan are shown in bright green and are led by South Korea’s Asiana Airlines and Korean Air. The fastest-growing carriers in the international market among the top 15 carriers are Spring Airlines (+74%), Xiamen Airlines (+46%) and Shanghai Airlines (+41%). A total of 117 airlines are currently operating international services to Chinese airports. New additions in the last 12 months have been Beijing Capital Airlines and Hawaiian Airlines, with t’way air returning to the Chinese market. Later this month will see Sharjah-based LCC Air Arabia launching its first Chinese service to Urumqi.

Analysed by country market the leading international markets from China are South Korea, Hong Kong, Taiwan, Japan, Thailand, the US and Singapore. Of these, the fastest-growing by far is Thailand, which has seen a 46% increase in seat capacity in the last year, followed by South Korea (+31.5%). This week alone will see new services starting between China and Thailand operated by Okay Airways, Shenzhen Airlines, Spring Airlines and Xiamen Airlines.

Among China’s top 10 airports, five reported double-digit growth in 2014, with Chongqing (+15.8%) just beating Hangzhou (+15.4%). Beijing’s capacity issues resulted in it being the slowest growing of the top 10 airports, with passenger numbers up less than 3% to 86.1 million, leaving it still some way behind Atlanta (96.2 million in 2014). 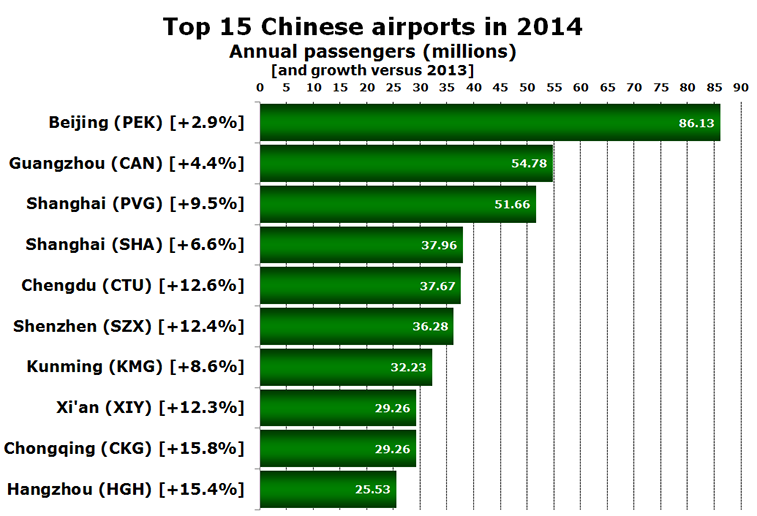