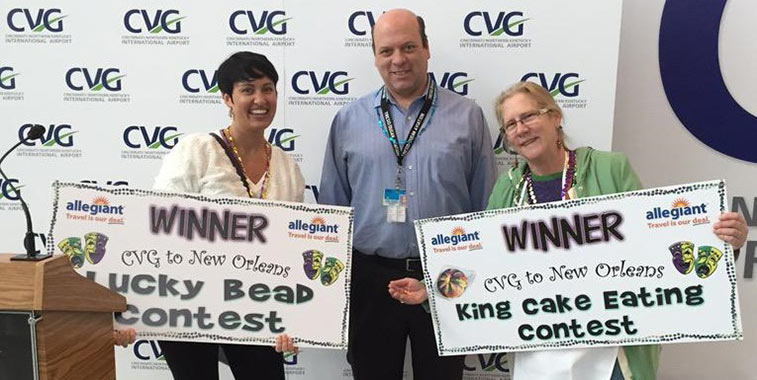 Established in 1946 as Moisant Field, New Orleans Airport (also known as Louis Armstrong New Orleans International Airport since July 2001, honouring the 100th anniversary of the American jazz singer’s birth) is the primary gateway to the New Orleans metropolitan area, having a population of around 1.2 million. The facility, which was once a major gateway for Latin American travel, is ranked as the country’s 37th busiest airport (2013 figures) according to anna.aero’s American Airport Traffic Trends mind-blowing database, behind Orange County, but above Raleigh-Durham.

Under operational control by the city of New Orleans, the airport offers 40 non-stop services according to Innovata schedule data for this January. Despite its status as an international airport, the majority of commercial flights offered are to domestic destinations within the United States. In fact, Canada is the only international country market served from New Orleans this month, with daily flights to Toronto Pearson. Interestingly, on 4 February, the airport welcomed Allegiant Air, which introduced twice-weekly flights to Cincinnati, Columbus, Indianapolis and Orlando Sanford. Commenting on the arrival of the LCC, Iftikhar Ahmad, Airport Director of Aviation, New Orleans, said: “We have been in discussions with Allegiant Air since I came to New Orleans, and I am very pleased to announce our efforts have paid off. This service creates new non-stop destinations for New Orleans and incremental tourism passengers, who otherwise would not have had direct access to our great city. With ultra-low fares and non-stop, all-jet service, Allegiant Air provides a complete travel experience with great value.” 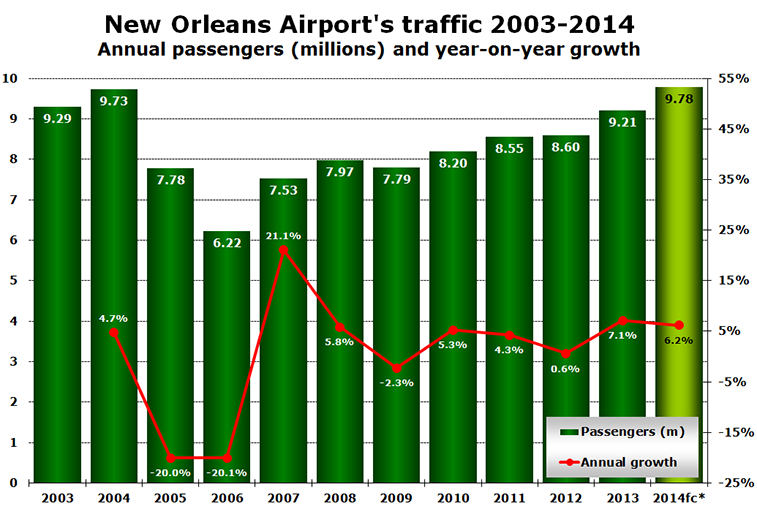 The impact of Hurricane Katrina on New Orleans and the surrounding area on 29 August 2005 had a major impact on traffic flows to and from the airport. In fact, the airport noted double-digit decrease of 20% in both 2005 and 2006. Overall, examination of data facilitated by the airport reveals that passenger traffic has decreased by 0.1% (CAGR) between 2003 and 2013. The airport handled around 9.2 million passengers in 2013, a figure that almost matched the 9.3 million recorded 11 years ago. In the first 11 months of 2014, for which traffic data is already available, the airport posted an increase of 6.2% when compared to the corresponding period of 2013, with nine million passengers achieved by end-November. If the airport continues on this growth trajectory, it will achieve a new record high close to 9.8 million passengers in 2014, based on anna.aero forecasts. Building on five consecutive years of growth, the 2014 passenger numbers mark a significant milestone for New Orleans.

Southwest Airlines controls 40% and 37% of seats and flights

Evaluation of Innovata schedule data for this February indicates that a total of 10 airlines are serving New Orleans, with Southwest Airlines maintaining its top position. The world’s biggest low-cost carrier accounts for 40% and 37% of weekly seats and flights respectively and operates a total of 20 airport pairs from New Orleans, of which Houston Hobby is the most frequently served destination with 68 weekly departures. The big-three legacy carriers fill positions two to four, with Delta Air Lines and United Airlines leading the way. Ranking fourth, American Airlines grew by an impressive 78%, following the integration of US Airways’ operations as part of their merger. Notably, the airport will welcome a new carrier on 24 June, when Copa Airlines will touch down with four weekly flights from Panama City. 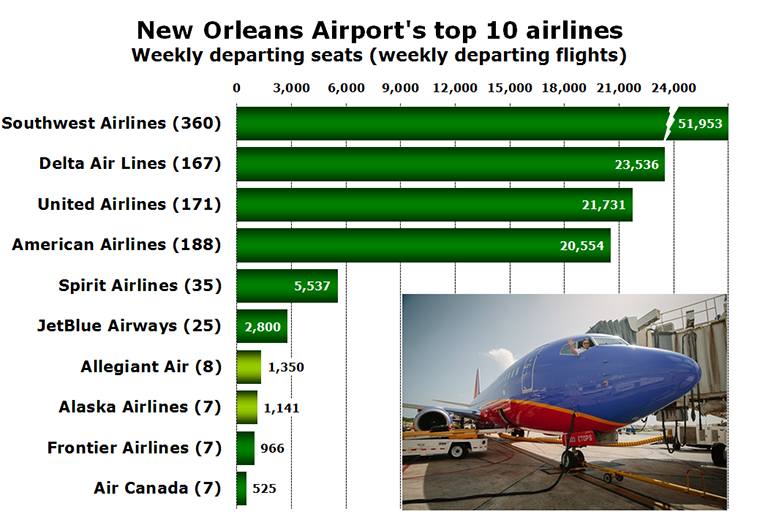 Weekly seat capacity has gone up 9.4% (when comparing data from this February with the same week last year), with six carriers recording growth, while Air Canada saw its operations unchanged. Besides Allegiant Air, New Orleans has seen the arrival of Alaska Airlines with daily flights from Seattle-Tacoma on 12 June; while both AirTran Airways and US Airways’ operations have been absorbed by Southwest and American respectively. Spirit Airlines is the fastest growing airline at the airport, with a net increase of 4,522 weekly seats or 446% over the last 12 months, due to adding daily services to Detroit, Fort Lauderdale, Houston Intercontinental and Chicago O’Hare. By comparison, Frontier Airlines is the only carrier that provided capacity decline (-30%), owing to its recent change in network strategy.

Atlanta continues to be top airport

Even though operations to Atlanta decreased by a modest 1.1%, the world’s busiest facility by passenger traffic since 1998 is still the top airport operated from New Orleans this February, having a market share of 12%. At 684 kilometres away, Atlanta is served by Delta (73 weekly flights) and Southwest Airlines (thrice-daily flights). This is followed by operations to Houston Intercontinental, which have posted 23% growth in weekly capacity, due to Spirit Airlines adding daily flights on 1 August 2014. On the other hand, except Atlanta, operations to Denver have also noted capacity decline (-4.8%), owing to Frontier’s shifting market strategy to avoid competition. 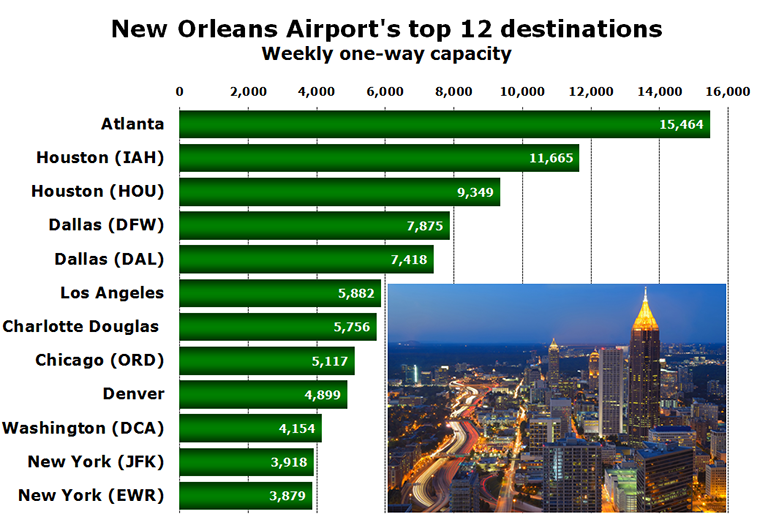 Overall, the top 12 destinations represent 65% of the total market, which is slightly down from the 67% recorded for the same week 12 months ago. Probably not surprisingly, the New York Area is served through three airports from New Orleans, namely New York JFK, New York Newark and New York LaGuardia with a combined 90 weekly flights by United, Spirit and Southwest. On 12 June 2014, an Alaska Airlines 737-800 from Seattle-Tacoma arrived at New Orleans Airport, where it was greeted with a special cake. Aimee Quirk, representing the City of New Orleans presents a Certificate of Recognition to Matthew Kessi, Alaska Airlines General Manager, Sales from New Orleans Mayor Mitch Landrieu. Iftikhar Ahmad, Director of Aviation pictured next to Kessi gave the welcome on behalf of the New Orleans Aviation Board.