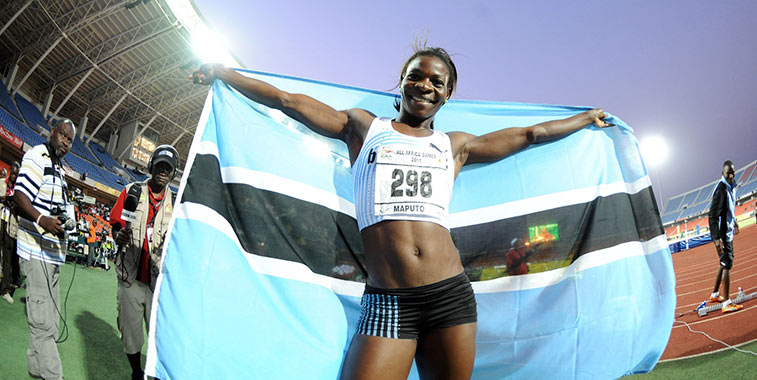 Known for its fast-growing economy and for being home of Amantle Montsho (400-metre gold medallist at Daegu 2011 World Championships and at Delhi 2010 Commonwealth Games), Botswana is also an African aviation hot-spot, being served by four international airports this February.

While it is home to an estimated population of 2.2 million inhabitants, Botswana covers an area of 581,730 square kilometres (around the size of Ukraine). In fact, Botswana is one of the most sparsely populated nations in the world, with around 10% of its population living in the capital city, Gaborone. Previously known as the British protectorate of Bechuanaland, Botswana adopted its new name after becoming independent within the Commonwealth on 30 September 1966. Being classified as one of the poorest countries in the world once, having a GDP per capita of around $70 per year in late 1960s, the country has since emerged into one of the fastest-growing economies. As of 2013, Botswana had a GDP per capita of around $16,400 per annum according to the Central Intelligence Agency.

The aviation sector played a significant role in this rapid economic growth, with Botswana being served by four commercial airports according to Innovata schedule data for February 2015, of which Gaborone (perhaps better known as Sir Seretse Khama International Airport) controls around 66% of the country’s scheduled seat capacity. With all four airports offering international services, Gaborone is the main gateway to the country as it offers a combined 86 weekly flights to Cape Town, Harare, Johannesburg, Lusaka and Nairobi.

Examination of Innovata annual capacity for this February reveals that around 502,000 one-way seats may be offered on air services involving Botswana airports in 2015, which may account for a decline of 3.1% when compared to 2014 figures, assuming that there are no significant changes in carriers’ schedules. Nevertheless, this figure is likely to alter as airlines may introduce or cancel services over the following 11 months. Based on schedules currently filed, domestic traffic is expected to register a decrease rate of 8.1%, while the international sector may go down by only 1.5%. 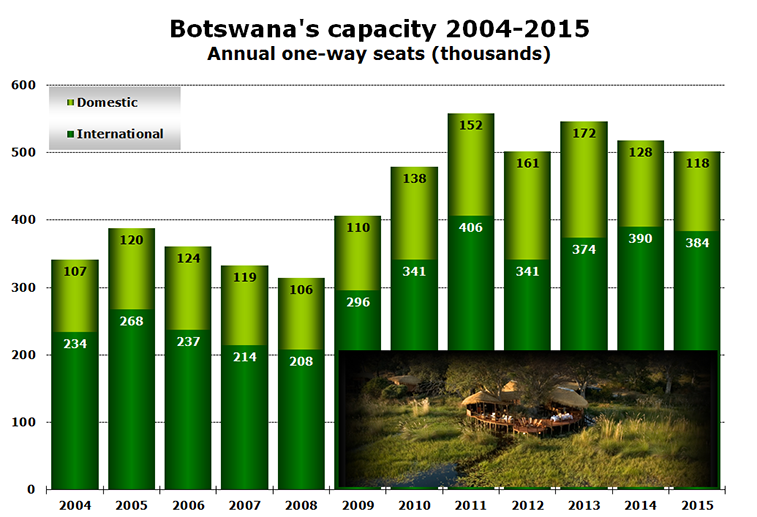 Looking at annual seat figures between 2004 and those currently posted for 2015, the combined capacity of the four Botswana airports grew with an average annual growth rate (CAGR) of 3.3%, with the international sector (+4.2%) outperforming the domestic market (+0.8%). Also interestingly, the international sector may increase by 64%, while the domestic one may go up 10% in 2015, when looking back 12 years to 2004. Not surprisingly considering the country’s political and economic instability in recent years, Botswana’s air traffic market saw an uneven development in the 2004-2015 timeframe.

As of February 2015, Botswana is served by five airlines, with the national carrier Air Botswana being the dominant player in this country market, as it controls 58% and 61% of all weekly seats and flights respectively. This week, Air Botswana operates a total of 16 airport pairs, of which eight of them are international routes. Johannesburg is the flag carrier’s most frequently served international destination, being served with 47 weekly flights from Gaborone, Maun, Kasane and Francistown.

A total of six country markets can be reached non-stop from Botswana according to Innovata schedule data for this February. At around 7,149 weekly seats and 3.1% more than in the corresponding week last year, neighbouring South Africa tops the list of country markets served, with a combined 107 weekly flights operated by Air Botswana and South African Airways. In addition, the domestic sector accounts for 25% of all weekly capacity, being served by only Air Botswana with 40 weekly flights. 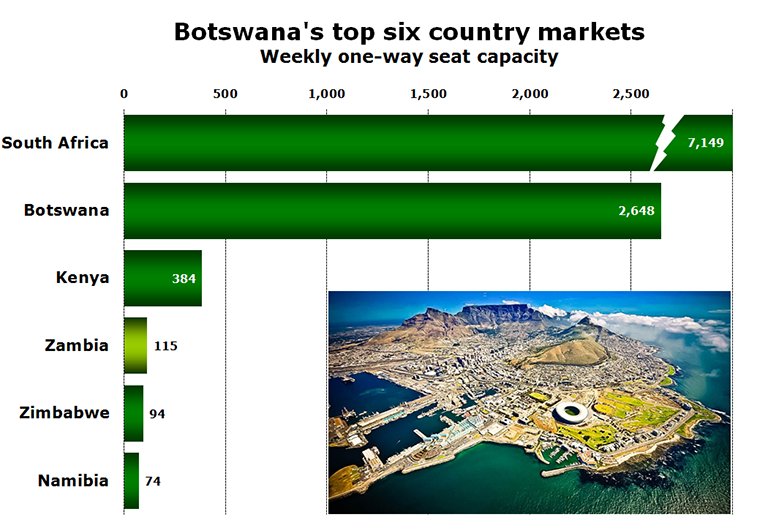 Zambia is a new entrant into this year’s ranking, owing to Air Botswana adding twice-weekly flights on the 1,065-kilometre sector from Gaborone to Lusaka over the past 12 months.