Belavia grows traffic by 26% in 2014; Russia is leading country market On 28 April 2014, Belavia began a new service to France, this time to Nice, with thrice-weekly flights. The 1,864-kilometre sector is served weekly as of February 2015. Celebrating the route launch in Minsk were: Anatoly Gusarov, General Director, Belavia; Irina Morozova, Deputy Director, Department of Aviation of Belarus; Dominique Gazuy, Ambassador of France to Belarus; and Igor Tcherginets, General Deputy Director, Belavia. The airline is also flying to Paris CDG with four weekly departures.

Founded on 5 March 1996, when the local Aeroflot division was nationalised and renamed, the flag carrier of Belarus – Belavia – has expanded considerably, as it offers services to a total of 38 destinations in 28 countries within Europe, the Middle East and Africa this February. Having its base at Minsk Airport, the state-owned carrier itself promotes the fact that it operates a fleet of 25 units, including 16 737s (nine 737-300s, six 737-500s, one 737-800), five CRJs (four CRJ 200s, one CRJ 100) as well as four ERJs (two E175s and two E195s). In fact, the airline took delivery of its first 737-800 on 23 January. This aircraft will be used to serve the sectors linking Minsk to Milan Malpensa and Rome Fiumicino from June to August. One more aircraft of this type will be leased to Belavia in April. In addition, it is expected that in 2016 the Belarusian carrier will purchase three new 737-800s from the US manufacturer.

Evaluation of Belavia’s passenger numbers indicates that the airline handled around 1.6 million passengers in 2013, representing an increase of 26% over 2012 figures. In the first 11 months of 2014, for which traffic data is already available, the carrier posted an increase of 26% when compared to the corresponding period of the previous year, with 1.9 million passengers achieved until end-November. If Belavia continued on this growth trajectory, it would have set a new record around two million passengers in 2014, based on anna.aero’s forecast. Nonetheless the airline is eager to raise passenger numbers by at least 10% in 2015, according to Anatoly Gusarov, General Director, Belavia: “We believe that this year Belavia will increase the number of passengers by at least 10% in spite of the possible difficulties.”

Brussels-Moscow Domodedovo is #1 route by seats

Analysis of Belavia’s current network for this February reveals that the airline operates 38 non-stop services from its base, with the top dozen airport pairs accounting for 74% of all weekly seats. Following an impressive 31% increase, the 689-kilometre sector to Moscow Domodedovo still accounts for the majority of weekly capacity in 2015, being served with six daily departures. Ranking second in terms of weekly capacity, the 682-kilometre route to St Petersburg is served with 20 weekly departures by Belavia, which competes with Aeroflot’s daily services. 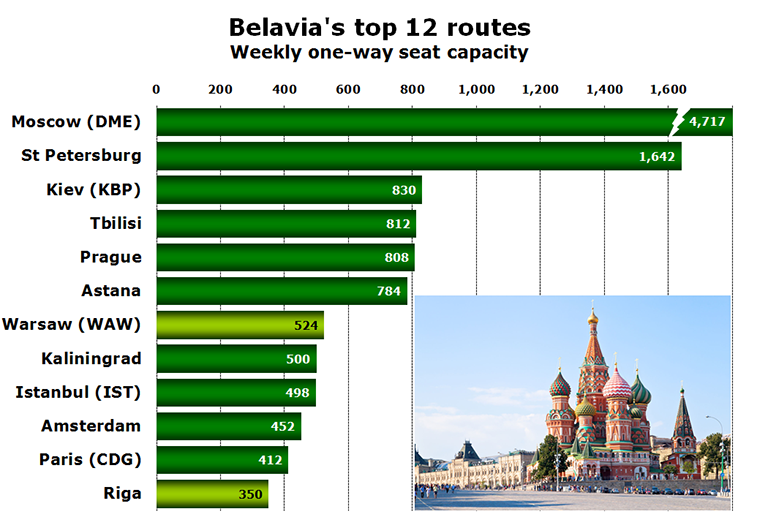 Belavia’s weekly seat capacity experienced 18% growth this February, with 10 of the 12 airport pairs growing (when comparing data from the corresponding week last year), while operations to Paris CDG remained unchanged. The link to St Petersburg is the fastest growing route, having increased by 82% or 740 weekly seats in the past 12 months. This comes as a result of the airline increasing its frequency from twice-daily to 20 times weekly in the past 12 months. By comparison, the Minsk-Kaliningrad airport pair provided the greatest capacity decrease (-37%). New entrants into this year’s ranking are the #7 and #12 routes (highlighted in bright green), which posted 67% and 75% growth respectively.

Belavia flies to a total of 27 countries in Europe, the Middle East and Africa, based on Innovata schedule data for this February. The airline’s top 12 country markets account for 85% of all weekly seats this winter, which is up 2% from last year’s figures. Belarus declared independence in 1991, but not surprisingly, Russia is still its leading country market for air travel, being served with a combined 81 weekly departures to Domodedovo, Ekaterinburg, Kaliningrad, Krasnodar, Samara, Sochi/Adler and St Petersburg. Georgia and Kazakhstan are the only country markets in this year’s top 12 ranking served by Belavia outside Europe. 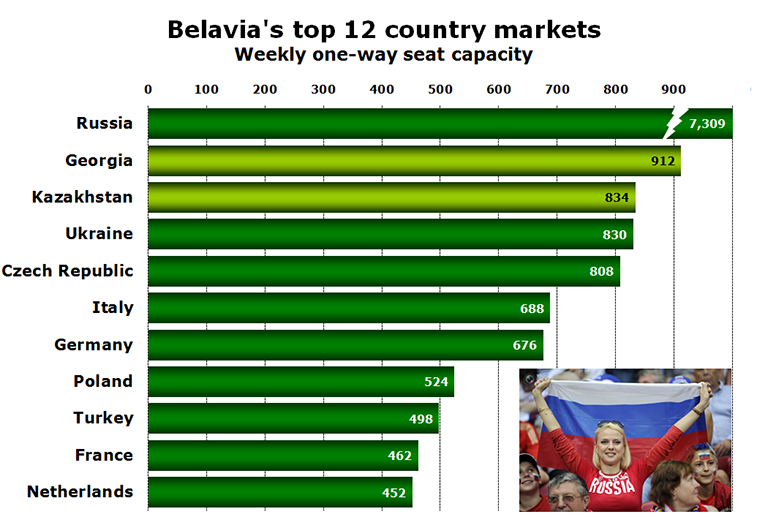 A total of 10 of the top dozen country markets experienced growth this month, while the carrier’s operations to Germany have remained unchanged. The stand out performance is that emanating from services to Latvia, having increased by 75%. This is closely followed by operations to Poland and Czech Republic, which noted 67% and 62% increase over the last 12 months. On the other hand, Georgia is the only country market in this year’s ranking that witnessed capacity decrease (-7.3), as a result of cancelling its twice-weekly flights to Batumi.