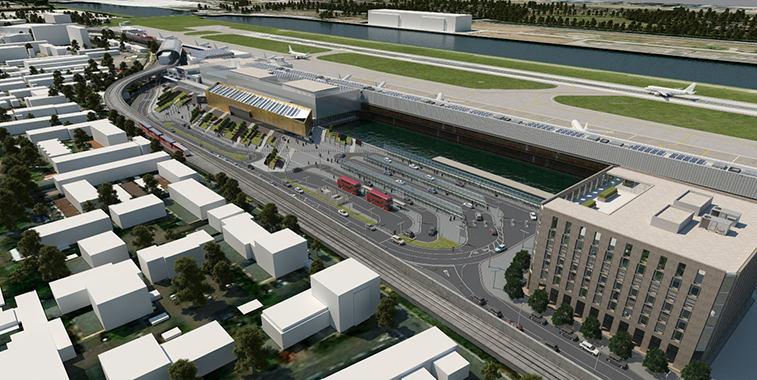 A glimpse of the future. Plans to expand London City Airport were given the go-ahead last week, clearing the way for a Є270 million investment that will enable the airport to operate up to a permitted 111,000 annual flights (from the 70,000 currently allowed) and handle up to six million passengers every year.

While London Gatwick and London Heathrow continue to squabble over where a new runway will be built, another London airport – City ‒ did its bit to help alleviate future aviation capacity concerns in the South East of England when its expansion plans were given the green light on 3 February. The €270 million investment will enable the airport to handle six million passengers per year and up to a permitted 111,000 annual flights as a result of the seven new aircraft stands, a parallel taxiway and terminal extensions to the west and to the east being constructed. 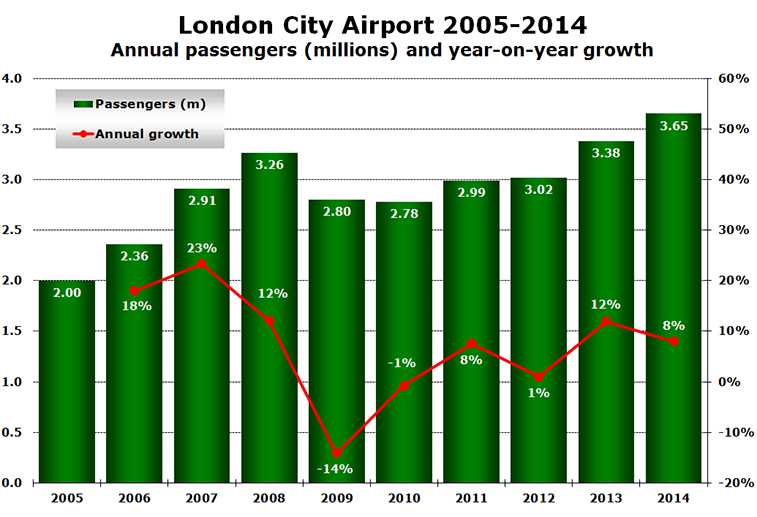 Looking at the airport’s recent traffic figures, which included a record breaking 2014 result of 3.65 million, these improved infrastructure plans will be necessary if its current growth trajectory continues, as London City has added nearly one million extra passengers to its annual throughput since the low experienced in 2010 (2.78 million). The airport’s management will undoubtedly be hoping to breach the four million passenger milestone in 2015, a landmark volume it has never come close to breaking in the past.

Entering London City’s monthly passenger data for 2014 into anna.aero’s Seasonal Variation in Demand (SVID) calculator, the airport performs very well, generating a score of 1.61 ‒ an ‘excellent’ rating. The airport’s seasonality performance has also improved when compared to the result achieved in 2013, when it attained a score of 1.84, but it is still down on the 2012 result of 0.81.

Evaluating London City alongside its most significant competing London airports, our data elves also ran SVID calculations on London Stansted (3.49 – ‘good’) and London Southend, which also generated a ‘good’ result (5.04). While London City’s annual traffic profile does reflect those found typically in the northern hemisphere, where airports experience seasonal lows in January and February, the summer highs normally found across Europe in July and August do not occur in this corner of London, as October 2014 was the airport’s busiest individual month last year. This result is easily explained, as October will still capture some holiday traffic, albeit not as busy as July and August, alongside it being a robust month for business travel (over 60% of the airport’s passengers are travelling on business). The seasonal lows for the three airports represent 68% (LCY), 58% (STN) and 50% (SEN) of their respective seasonal highs.

London City is currently served by 10 airlines, with the undisputed top carrier being British Airways ‒ this February it operates more than double the weekly seats of the second largest carrier at the airport, CityJet. Looking at the seats available in the week commencing 16 February, the airport is offering over 30% more than it did in the same week in 2014. This is due in part to the arrival of Flybe at London City, which since it started ‘inbound’ services on 6 October from Edinburgh last year has now established itself as the third largest operator (with nearly 13% of seats) at the airport. Aurigny Air Services is another new entrant to the London City market, launching flights from Guernsey on 8 September. However, the downtown airport did lose SkyWork Airlines to London Southend in October last year. 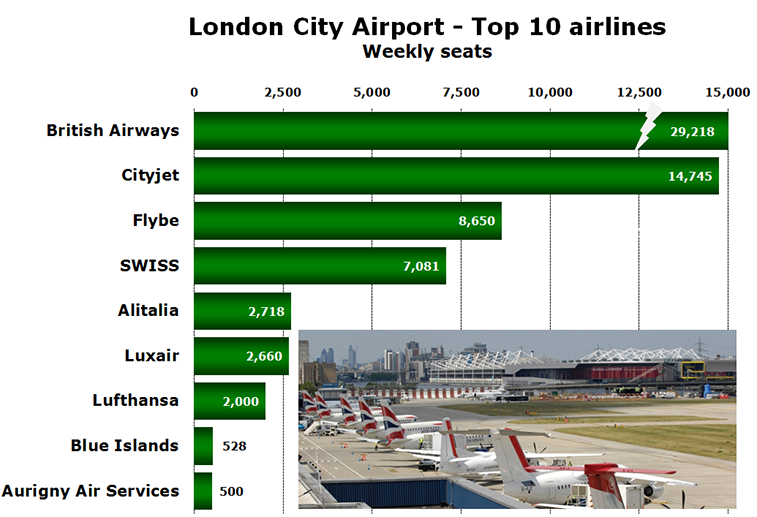 BA has not just maintained its position at London City, as it continues to expand its presence at the airport – having launched services to Florence, Rotterdam, Dublin and Hamburg in the last 12 months. As a result, it is the fastest growing carrier, registering year-on-year growth of 35% in weekly seats. While SWISS, Lufthansa and Blue Islands have not adjusted their respective capacities over the previous year, Cityjet has trimmed its activity by 10% ‒ the only airline posting negative growth at the airport.

London’s fifth largest airport (after London Heathrow, London Gatwick, London Stansted and London Luton) this month offers a scheduled network of 36 routes. The top 12 features three domestic routes – Edinburgh, Glasgow and Belfast City (highlighted in light green) – with the latter being a newcomer, as Flybe started the 15 times weekly operation on 20 October last year. These most important routes have increased their overall share of the total weekly seats from 73% last year to 77% in February 2015. 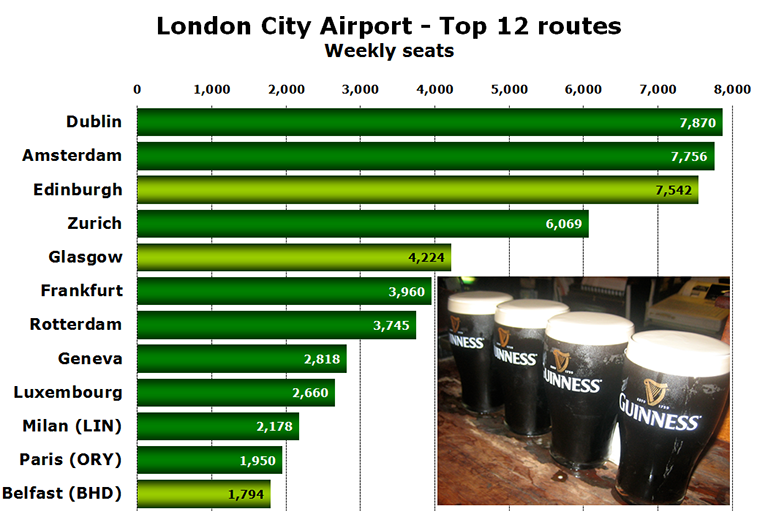 Referring to London City’s schedules from 12 months ago, Dublin has leapt to top spot, having been in fifth in the same week last year. This ascendency is due to British Airways launching 26 times weekly services to the Irish capital on 26 October, which has seen weekly seats increase by nearly 170% year-on-year – the fastest growing route in the top 12 – beating off Edinburgh (+90%) and Rotterdam (+74%). Only one route in the top dozen has posted an annual decline, namely Luxembourg (-7.9%), while Geneva has remained static, with weekly capacity unchanged.

To date, there is limited new route growth anticipated at London City this summer, according to anna.aero’s New Route Database. BA will launch two new seasonal services, one to Mykonos on 29 June (until 6 September) and another to Santorini on 30 June (until 4 September).