Asia asserts itself in global ‘Arch of Triumph’ competition

Delhi delivers! Its first ever FTWA not only sees it secure the weekly title, beating off opposition from airports as far-flung as Birmingham in the UK, Sochi/Adler in Russia and New Orleans in the US, but the Indian capital leaps straight to the summit of the five-week old airport competition, ousting the previous leader Turin, which has led since week one. Almost as significant, its victory has also allowed Asia to put some fresh air between it and the rest of the world in terms of the inter-regional competition, with two wins from five. Asia finished second in 2014, but at some considerable distance behind, registering just six wins against a titanic 29 from Europe. So having got off to a flying start in 2015, could this be its year? Keep monitoring!! 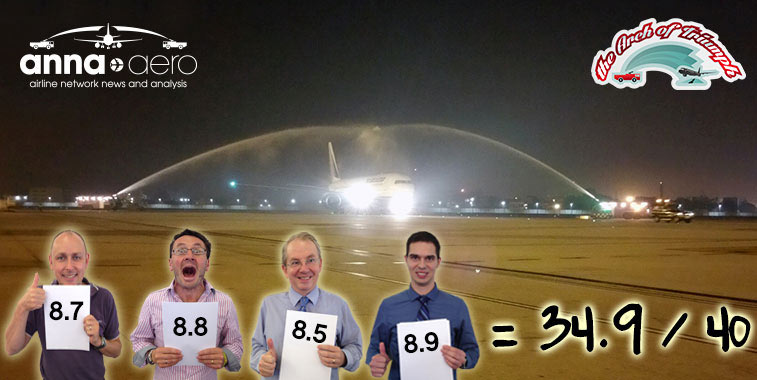 Despite a bit of ‘pancaking’, this is a delicious FTWA delivery in Delhi…

Judge’s comments:  Admittedly with a 48-metre wingspan (there are no winglets on the operating aircraft EI-UND), the firefighters at Delhi were right to be cautious with the positioning of their tenders. However, the resulting flattened FTWA has ‘pancaked’ a little, with the Arch angle falling below the critical 40 degree benchmark. That said it has done enough this week to impress anna.aero’s judges, and see it sitting pretty on the top of the overall leader board. 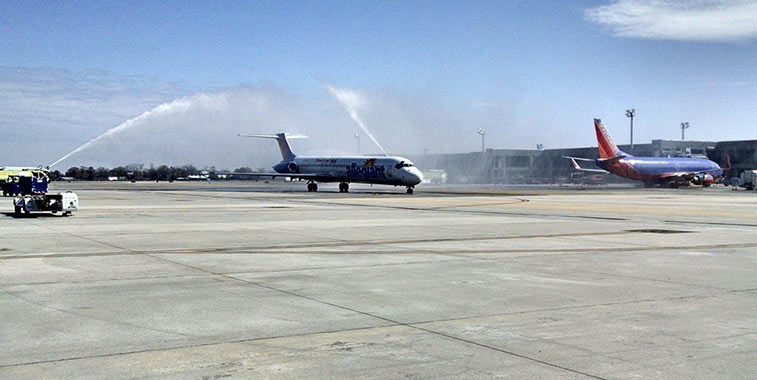 Judge’s comments: We are all for creative flair when it comes to airport marketing. However, when it comes to FTWAs, our four judges are hideously staid, even when we are presented with one of the world’s rarest specialist varieties – as we are here, with this ‘Big Easy’ style FTWA, exclusively produced at Louis Armstrong International. A bit like when party-goers at Mardi Gras in the city miscalculate the trajectory of their thrown necklaces and end up blinding innocent by-standers, this arch has its angles all wrong too. 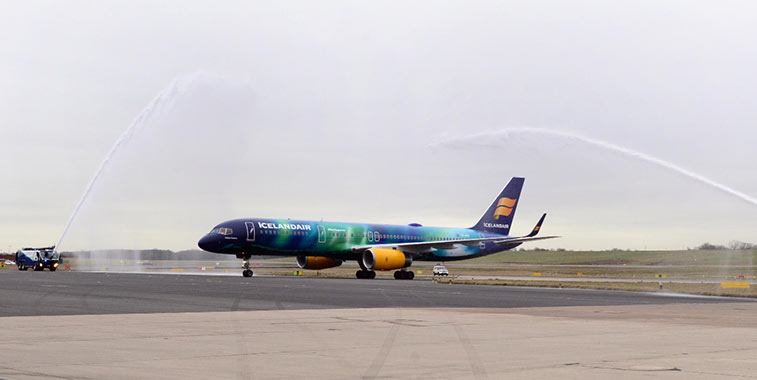 The Icelandair ‘Aurora’ logo jet, promoting the Northern Lights in Iceland gets a dousing in Birmingham…

Judge’s comments: Our expertise allows us to tell you that these are Oshkosh trucks. How do we network planners know that? Well, we were in the office of the CEO at Birmingham last week and he told us. The airport easily carried off Cake of the Week this week for a marvellous edible creation for the inaugural Icelandair service from Reykjavik/Keflavik. In contrast, this fire truck water arch, like the special liveried aircraft, may prove a little bit too creative to win this week. Not everyone is ready for this radicalism, hence the spectrum of scores. 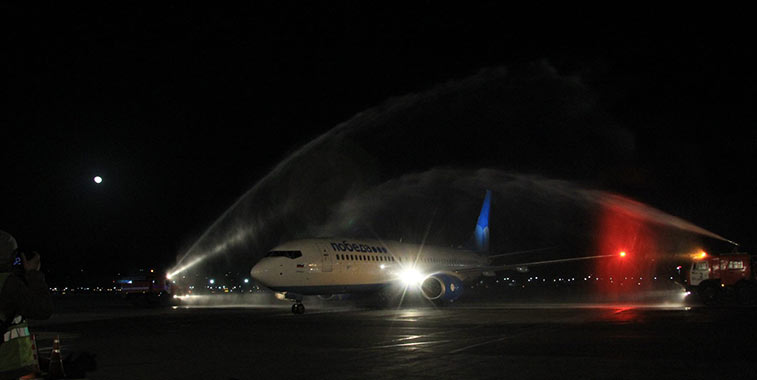 Judge’s comments: Last year’s Sochi Winter Olympics were widely touted as being the most expensive Games ever, so clearly the city’s budgets are going to be squeezed this year. The result is a cheap and cheerful FTWA for the launch of Pobeda’s new service from Moscow Vnukovo, which are meant to emulate the K95 (Normal Hill) and K125 (Large Hill) ski jumps constructed for the Sochi Games.