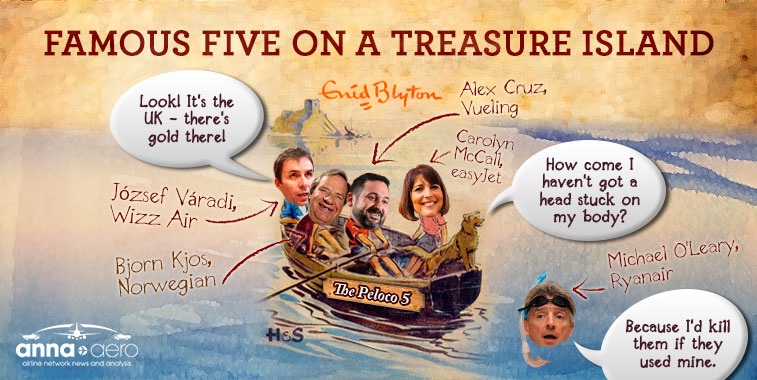 Today’s anna.aero invented word is: ‘Peloco 5.’ It stands for these five Pan-European Low Cost airlines which have multiple bases outside of their home market (sorry germanwings!). On this basis the UK economy would appear to be doing the best in Europe as three of the Peloco 5 have their fastest-growing airports serving London. However, at a country level, Italy beats the UK in capacity growth with more additional seats overall than the UK airports this summer.

Demand for air travel has always been highly correlated with a country’s economic growth. So identifying the airports at which Europe’s five biggest pan-European LCCs are growing the most (those with bases outside of their own country and therefore disqualifying germanwings) presumably gives a good indication of where the carriers believe demand can best be stimulated.

The following summary of each airline’s route network compares data for last August with this coming August. It is possible that there may still be additional changes to these schedules as they are still six months away. However, this is the position as of mid- February.

Ryanair’s changed focus on major cities and major airports is confirmed in the list of the airline’s 15 fastest-growing airports this summer. The top seven airports are all serving capital cities of EU countries, with Berlin and Copenhagen also making the grade. 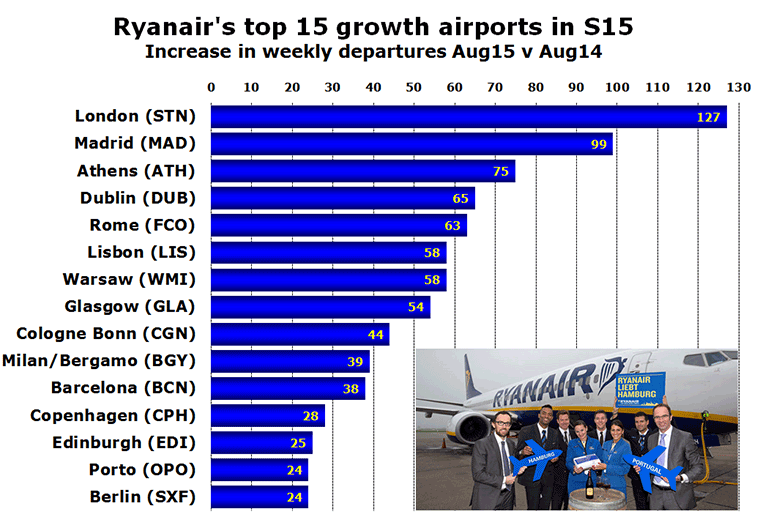 London Luton, where easyJet’s HQ is located, will see the biggest increase in flights this summer compared to last, narrowly beating Amsterdam (which becomes an official base this summer) and Geneva, Rome and Hamburg (which became a base last summer). Four UK airports appear in the top 15 (London Luton, London Gatwick, Bristol and Manchester), as well as three German airports: Hamburg, Munich and Stuttgart. The latter is also the airline’s biggest new airport for this summer, with services to London Gatwick, Milan Malpensa and Porto. 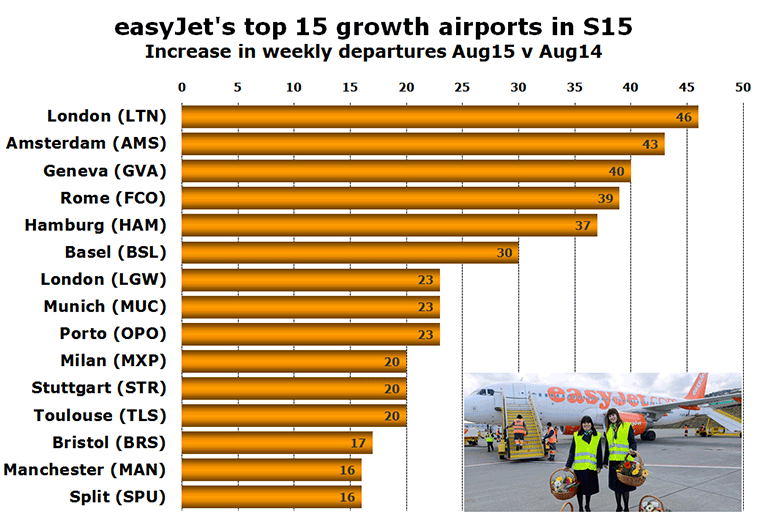 IAG subsidiary Vueling is still growing significantly at its home base of Barcelona, but this summer its biggest expansion is at Rome Fiumicino. The additional 109 weekly flights represent over 40% growth on last year and will be achieved thanks primarily to the launch of 24 new routes from Italy’s busiest airport. However, even Vueling, which is not big in the UK, is growing its London Gatwick operations thanks to the launch of new routes to Bilbao and, yes, Rome Fiumicino. 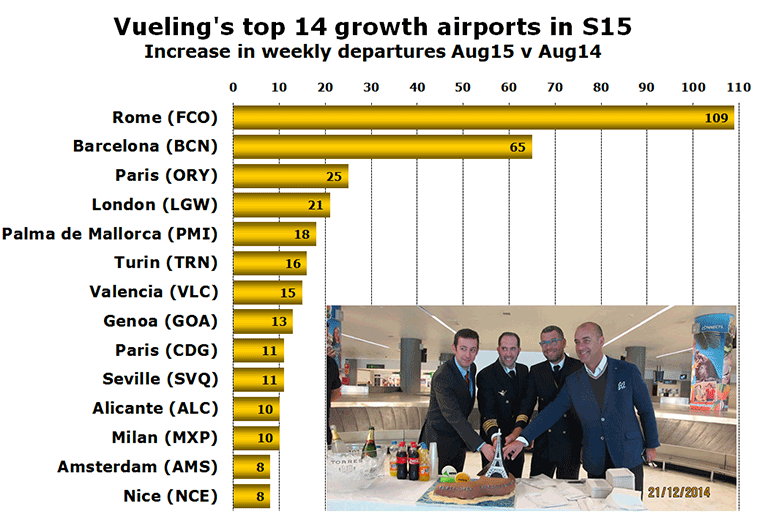 After many years of rapid growth which made it Europe’s third biggest LCC at one time, Norwegian appears to be using 2015 to take stock. Network seat capacity growth is currently scheduled to be up less than 1%, while flights are actually down 2.8%, as a result of the airline’s still-growing 787 network, which has obviously increased its average aircraft size. The airport’s fastest-growing airport is its London Gatwick base where it has added routes to Berlin, Kefallinia, Orlando and Warsaw. Birmingham is Norwegian’s biggest new airport, proving the growing appeal of the UK market, where it has launches to Barcelona, Madrid and Malaga this summer. 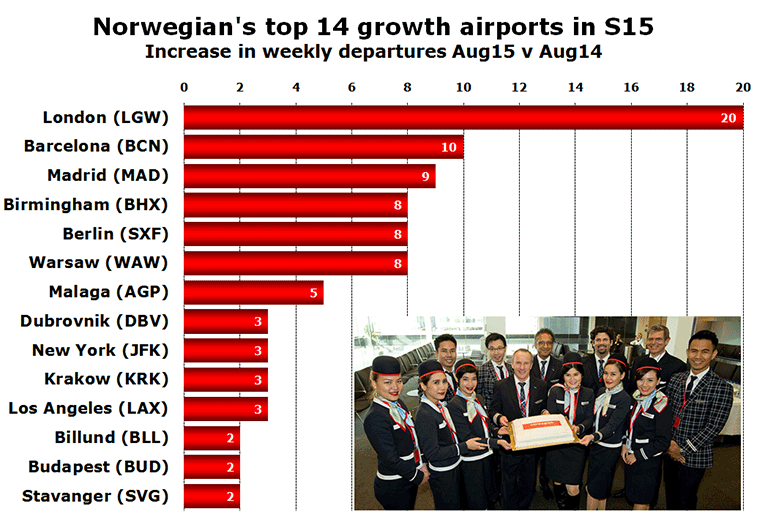 Wizz Air may be the smallest of the five airlines analysed but it is also the fastest-growing. This summer will see it operating almost 21% more flights across its multitude of bases in Central and Eastern Europe. Three of the airline’s top four fastest-growing airports are in Central Europe’s most populous country, Poland, with Gdansk just beating Warsaw. Gdansk’s almost 30% growth in capacity is, in part, down to new twice-weekly routes to six destinations: Aberdeen, Billund, Brussels Charleroi, Frankfurt Hahn, Groningen and Molde. It needs to be noted that this analysis is only for Wizz Air (W6) and does not include data for Wizz Air Ukraine (WU). 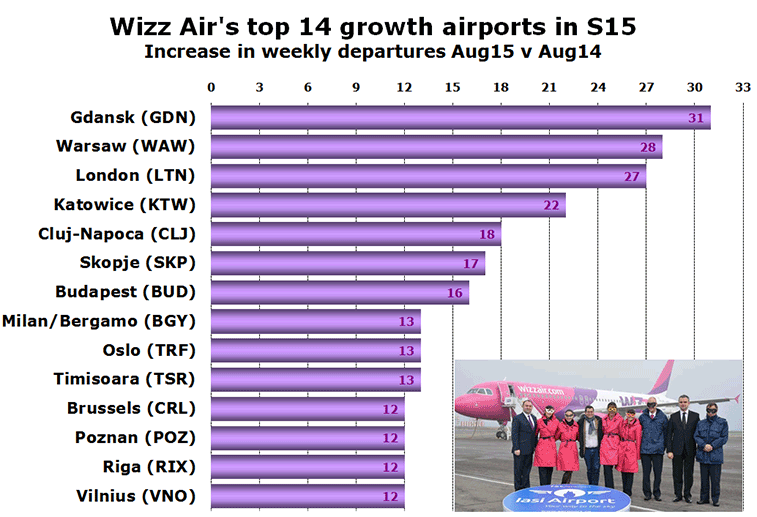 Despite the impressive growth at London airports, an analysis across the Peloco 5 reveals that, at a country level, Italy’s airports will see more additional seats year-on-year than UK airports. The major driver of this is Vueling’s expansion in Rome, although Ryanair’s growth in the eternal city, and in Milan, also contributes significantly. Spain, Poland and Germany fill out the remaining positions of the countries to see the biggest gain in weekly seats. In percentage terms among the top 30 country markets the fastest-growing are Poland (+27.0%), Latvia (+22.8%), Czech Republic (+19.2%), followed by Portugal and Romania (both +18.3%).

The top five country markets for these five carriers for total seats are Spain, UK, Italy, Norway and Germany. In all 55 countries are served by at least one of these airlines (up one from last year with the addition of Ghana, courtesy of Vueling). Overall, seat capacity across the Peloco 5 is up 7.5%. With fuel prices making up a bigger proportion of costs at LCCs, the fall in oil prices may encourage these carriers to add further capacity this summer. And with Cyprus Airways having already stopped operating and eurolot announcing its decision to cease operations at the end of March there may be further casualties among Europe’s more vulnerable carriers this summer, as the Peloco 5 continue to thrive.