Lima Airport reports 5.7% traffic growth in 2014; LAN Airlines is leading carrier with half of all seats and flights On 21 November last year, Lima Airport (also known as Jorge Chávez International Airport), saw the arrival of JetBlue Airways, with daily flights from Fort Lauderdale, a sector still operating this February. Addressing the audience shortly before the inaugural flight from the US airport is JetBlue’s EVP, Eash Sundarum.

Located 11 kilometres from the historic centre of Lima and 17 kilometres from Miraflores, Lima Airport (perhaps better known as Jorge Chávez International Airport) is the international and domestic airport of Peru. The airport caters for a population of 8.9 million and serves as an operating base for LAN Airlines, Avianca Peru, Peruvian Airlines, Star Peru and LC Peru, while for many years it was the hub for the defunct Aeroperu and Faucett Peru, with the latter having been one of the oldest carriers in Latin America. Operated by Lima Airport Partners that holds a 30-year concession to operate the facility, the airport controls 63% of the country’s seat capacity and offers non-stop flights to 56 destinations in 21 countries in the Americas and Europe (according to Innovata scheduled data for this February). 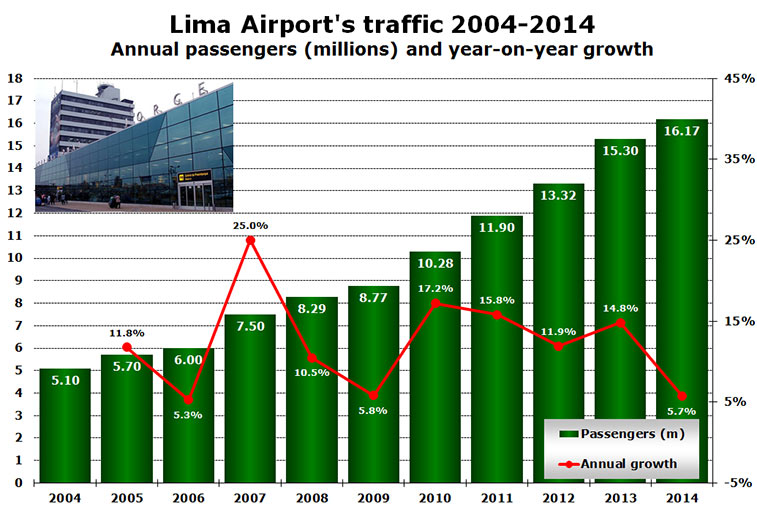 Analysis of data provided by the airport authority indicates that Lima’s traffic has grown impressively during the 2004-2014 timeframe, with an average annual growth rate (CAGR) of 11% over this period. The airport handled over 16 million passengers in 2014 (a new record high), a number that increased from the 5.1 million recorded 10 years ago. In addition, when compared to 2013 figures, Lima’s traffic increased by 5.7%. Interestingly, the airport continued to grow even in the worst years of economic recession, experiencing a double-digit growth of 17% in 2010 when compared to the previous year.

LAN Airlines controls 52% and 49% of seats and flights

While a total of 24 carriers operate from Lima, the top 12 airlines command over 93% of weekly seats this February. LAN is still the biggest carrier at the airport as it accounts for 52% and 49% of weekly seats and flights respectively and flies on a total of 34 airport pairs from Lima, of which the 584-kilometre domestic sector to Cuzco is the most frequently served route with 99 weekly departures. Controlling 19% of seats at the airport, Avianca (#2 carrier) links Lima to 24 destinations. Interestingly, three European carriers (highlighted in bright green) have entered this year’s ranking, namely KLM from Amsterdam as well as Air Europa and Iberia from Madrid. In addition, Lima is also served from Paris CDG, by Air France with four weekly flights. 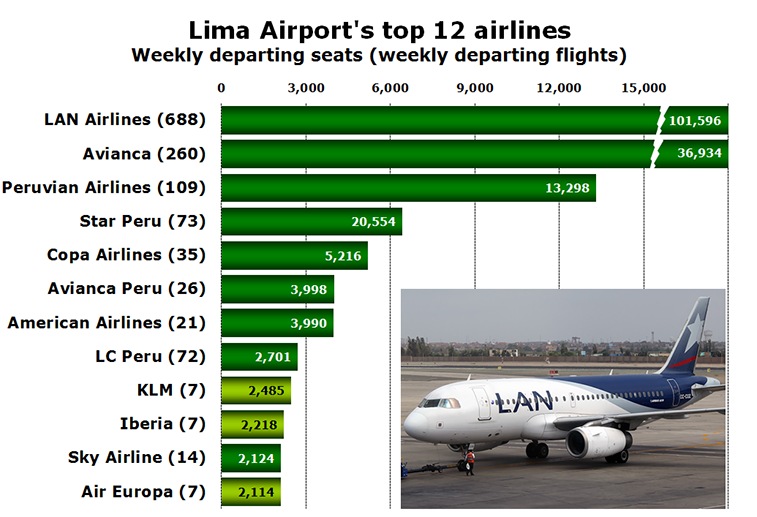 Total weekly seat capacity at Lima has gone up 2.3%, with seven of the top dozen carriers recording growth, when comparing data from this February with the same week last year, while KLM saw its operations unchanged. Following the integration of TACA Airlines’ operations as part of their merger, Avianca is the fastest growing carrier, with an impressive net increase of 34,498 weekly seats over the last 12 months. With the completion of the merger, TACA became officially Avianca Peru, retaining 11% of its former operations to serve Rio de Janeiro Galeao, Sao Paulo Guarulhos and Porto Alegre in Brazil, as well as Havana in Cuba, from Peru’s busiest gateway. By comparison, LC Peru noted the greatest capacity decline (-11%), due to reducing its frequency on three domestic sectors from its base, namely to Andahuaylas, Huaraz and Tingo Maria.

Cuzco is still top destination in 2015

Following an increase of 4.3%, Cuzco is still the top destination served from Lima in 2015, accounting for a market share of 13%. The historic capital of the Inca Empire, which was declared a World Heritage Site in 1983 by UNESCO, is served with a combined 204 weekly departures by LAN, Avianca, Star Peru and Peruvian Airlines. This is followed by operations to Santiago, which has managed to climb one position when compared to data from the same week last year, as weekly capacity has grown by 1,499 seats or 11%. Both Sky Airline and LAN have managed to increase their frequencies on the sector to Chile’s capital and largest city by one daily flight and five weekly departures respectively. On the other hand, Tarapoto (-16%), Miami (-10%), Arequipa (-8.8%) and Buenos Aires Ezeiza (-4.6%) are the only cities of the top dozen that have witnessed capacity fall this February. 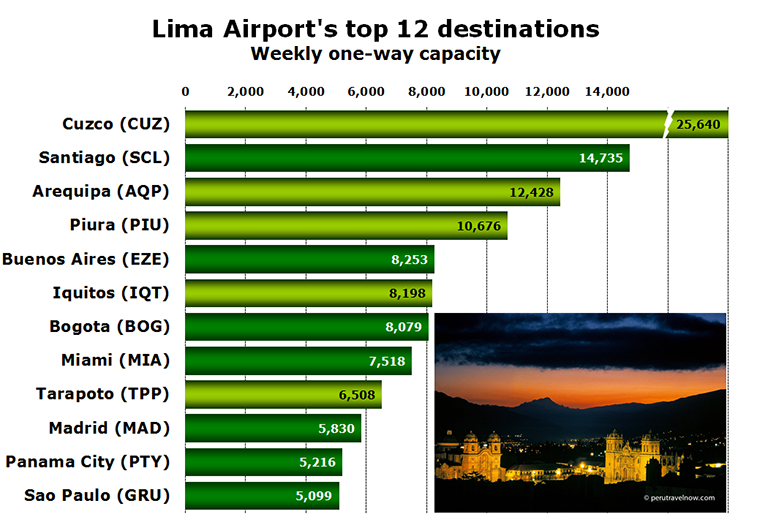 Overall, the top 12 destinations represent 60% of the total market, which accounts for the same market share recorded for the corresponding week 12 months ago. Five domestic destinations appear in the top dozen (highlighted in bright green), namely Cuzco, Arequipa, Piura, Iquitos and Tarapoto, which are served by LAN with a combined 276 weekly departures. While Lima has seen the addition of Talara this year, it has also witnessed the withdrawal of operations to San Francisco in the USA, Santo Domingo in the Dominican Republic and Antofagasta in Chile over the past 12 months.