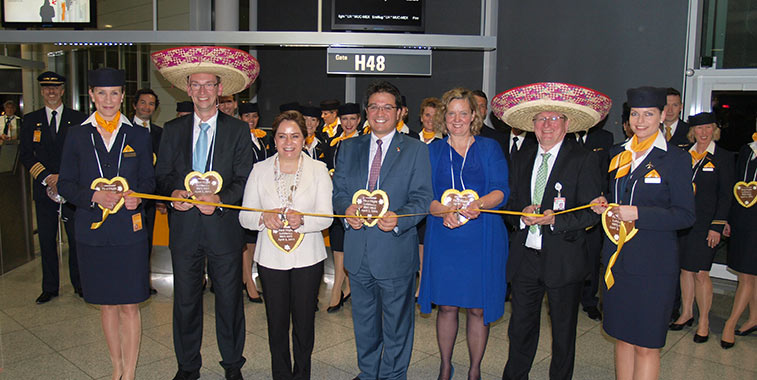 Lufthansa’s new Munich to Mexico City service was launched on 3 April 2014, operated five times weekly by its A340-600s. Mexico City handled over 34 million passengers last year, of which 11.5 million were on international services (+8.2%). Mexico’s airports broke through the 100 million passenger mark in 2014, with traffic growing by around 8% per annum for the third successive year.

Mexico has done it! In 2014, for the first time, the country’s airports combined handled over 100 million passengers. Passenger statistics from the Mexican government confirm that passenger demand grew by 8.4% last year, and as a result 100.9 million passengers passed through the almost 60 airports handling commercial airline traffic. This is now the third year in succession that passenger numbers have grown by around 8%, indicating a growing maturity in the Mexican market.

Mexico City accounts for over one-third of all passenger traffic, with 34.3 million passengers last year, up 8.6% on 2013. A total of 13 airports handled more than one million passengers in 2014, the same number as the previous year, though Leon/Guanajuato joined this category replacing Toluca, which fell below the one million mark. Among the top 15 airports, five have seen their traffic grow by more than 10% in the last year. 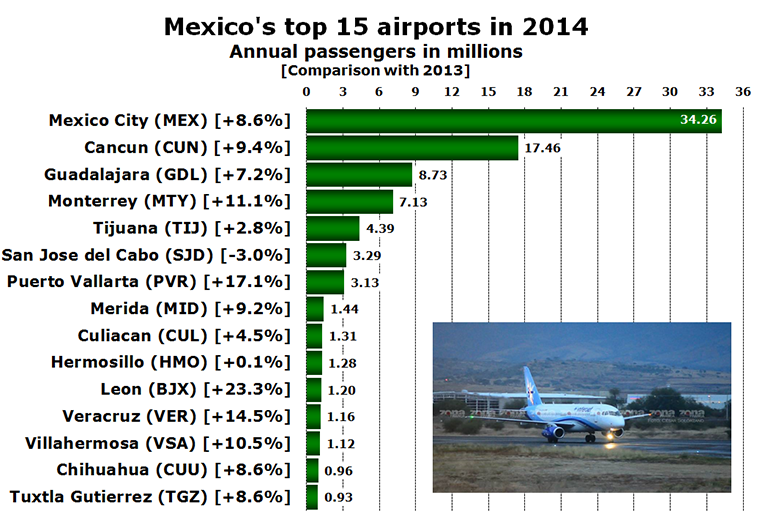 The only airport to see a drop among the Top 15 was San Jose Del Cabo. This airport, located on the Baja California Sur coast, was in the path of Hurricane Odile in September, which resulted in a 49% fall in international passengers that month (and 42% drop in total passengers). In October the corresponding figures were 82% and 66%, so a 3% drop across the whole year was a pretty good effort. Up until August San Jose Del Cabo’s traffic had been up 10.3% on a year-to-date basis.

The battle to be the leading carrier in the Mexican domestic market continues to be a closely-fought contest between two LCCs, Interjet and Volaris. Interjet was #1 for seven months in 2014, Volaris for four months, while Aeromexico Connect topped the market share list in March with 23.3%. No single carrier has managed a share of 30% or more since anna.aero started tracking this data back in 2007.

The Aeromexico group of airlines had a combined share of between 32% and 40% during 2014, but this is currently split between Aeromexico Connect and Aeromexico. The LCC share of the domestic market (Interjet, VivaAerobus and Volaris) is consistently around the 60% mark and reached a new record high of 61.4% in December 2014. 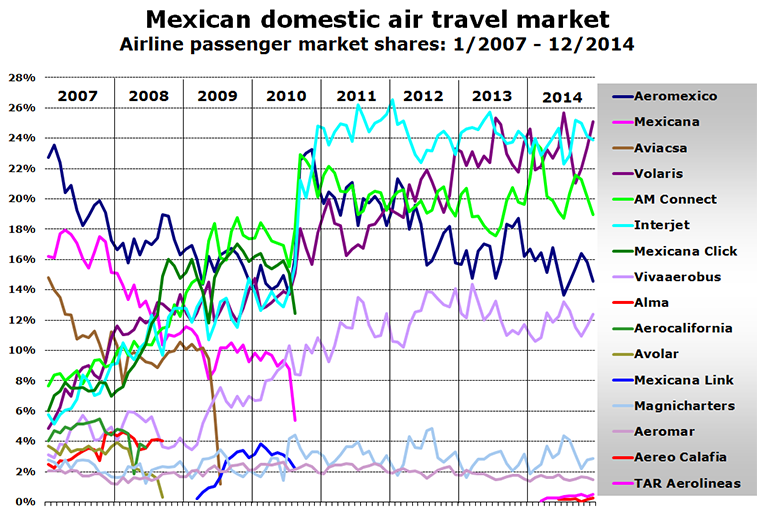 US carriers continue to add new routes to Mexico in 2015

New international services already announced for 2015 (that will operate at least twice-weekly) include the following:

All of these new international routes are within the Americas. Later in the year, Thomas Cook Airlines plans to operate four flights in July and August from London Stansted to Cancun, while Lufthansa is planning flights from Frankfurt to Cancun starting in December.